Are wrasses the smartest fish? 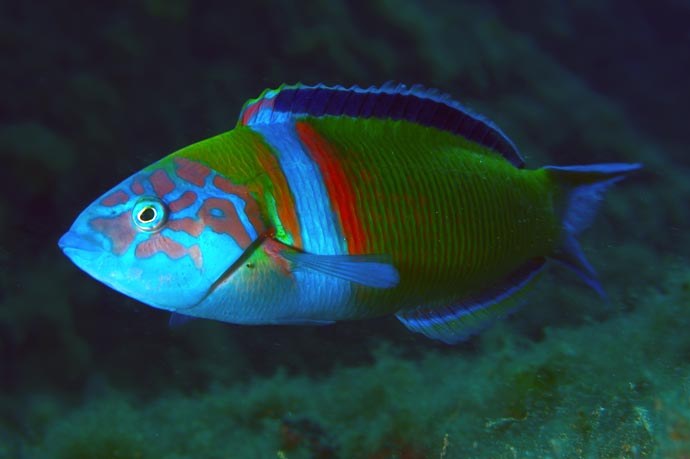 
Earlier this year, scientists documented Blackspot Tuskfish (Choerodon schoenleinii) on the Great Barrier Reef using rocks to crack open cockle shells.  Tool usage is often denoted as a sign of intelligence.  Now new research shows another wrasse understands how to exploit the natural behavior of other animals for their own benefit.

Ornate wrasses (Thalassoma pavo) enjoy dining on the nutritious tubed feet of sea urchins.  However, when urchins sense predators around, they will hunker down into the substrate, making it very difficult for wrasses to reach the tasty meal.

Enter: Marthasterias glacialis, a starfish.   This starfish also enjoys feasting on sea urchins, but aren’t fast enough to catch them consistently.  Researchers at Tuscia University (Italy) have discovered the two species help each other in this common pursuit.  Ornate wrasses force sea urchins to anchor themselves in self defense, giving time for starfish to catch up and attack the stationary sea urchin.  When the starfish uproots the sea urchin, the wrasse swoops in and snipes a few tubed feet.

The research was presented at this year’s Association for the Study of Animal Behaviour in St Andrews, a summer conference aimed to promote an understanding of animal intelligence.