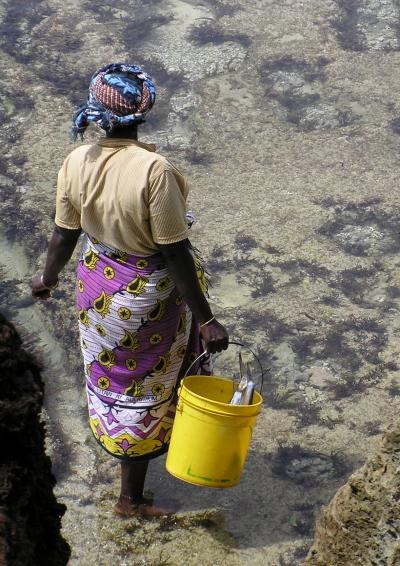 This is a fish trader in Kenya, one of five countries included in the largest study of tropical coral reef fisheries ever conducted. Photo: Joshua Cinner.

One solution to global overfishing found

A study by the Wildlife Conservation Society, the ARC Centre for Excellence for Coral Reef Studies, and other groups on more than 40 coral reefs in the Indian and Pacific Oceans indicates that “co-management”—a collaborative arrangement between local communities, conservation groups, and governments—provides one solution to a vexing global problem: overfishing.

The finding is the outcome of the largest field investigation of co-managed tropical coral reef fisheries ever conducted, an effort in which researchers studied 42 managed reef systems in five countries. The team of 17 scientists from eight nations concluded that co-management partnerships were having considerable success in both meeting the livelihood needs of local communities and protecting fish stocks.

“In an age when fisheries around the world are collapsing, fisheries experts have struggled to find the magic balance between livelihoods and conservation,” said Dr. Tim McClanahan, a co-author on the study and head of the Wildlife Conservation Society’s coral reef research and conservation program. “What we’ve found is that effective solutions require both top-down and bottom-up approaches with a foundation of community-based management.”

Team leader Dr. Josh Cinner of the ARC Centre of Excellence for Coral Reef Studies and James Cook University, Australia explained: “We found clear evidence of people’s ability to overcome the ‘tragedy of the commons’ by making and enforcing their own rules for managing fisheries. This is particularly encouraging because of the perceived failure of many open-access and top-down government-controlled attempts to manage fisheries around the world. More importantly, we have identified the conditions that allow people to make co-management successful, providing vital guidance for conservation groups, donors, and governments as to what arrangements are most likely to work.”

The study’s main finding is that co-management has been largely successful in sustaining fisheries and improving people’s livelihoods. More than half the fishers surveyed felt co-management was positive for their livelihoods, whereas only 9 percent felt it was negative. A comparison of co-managed reefs with other reefs showed that co-managed reefs were half as likely to be heavily overfished, which can lead to damaged ecosystems.

“However we also found that where fisheries are closest to big, hungry markets, they tend to be in worse shape,” said Dr. Nick Graham of the ARC Centre of Excellence for Coral Reef Studies and James Cook University. “This strongly suggests globalized food chains can undermine local, democratic efforts to manage fisheries better. People often assume that local population size is the main driver of overfishing – but our research shows that access to global markets and seafood dependence are more important, and provide possible levers for action.”

One of the unexpected results of the study revealed that co-management benefits the wealthier people in the local community, although it is not detrimental to the poor. “In other words, the main benefits tend to trickle up to the wealthy, rather than trickle down to the poor,” Dr. Cinner added. “Nevertheless, most people felt that they benefitted.”

The team found that the institutional design of the fishery management arrangement was vital in determining whether or not people felt they benefited from co-management and were willing to work together to protect fish stocks by complying with the rules. “It is really important to get the structure of the co-management arrangements right, if you want people to co-operate to protect their marine resources,” Dr Cinner said. “Managers and donors can help build the legitimacy, social capital, and trust that foster cooperation by making targeted investments that lead toward transparent and deliberative co-management systems, where all participants feel their voice is being heard.”

According to the authors, the new study fills an important gap by providing fisheries managers with an example of how governments and local communities can work together effectively to protect local environments and food resources.

“Finding and implementing solutions to over-fishing that work for impoverished coastal communities is critical for the long-term viability of our oceans and the people that depend on them,” said Dr. Caleb McClennen, Director for WCS’s Marine Conservation. “This study demonstrates that long-term investment in co-management regimes is essential for the sustained health and economy of coastal populations and their supporting marine ecosystems.”