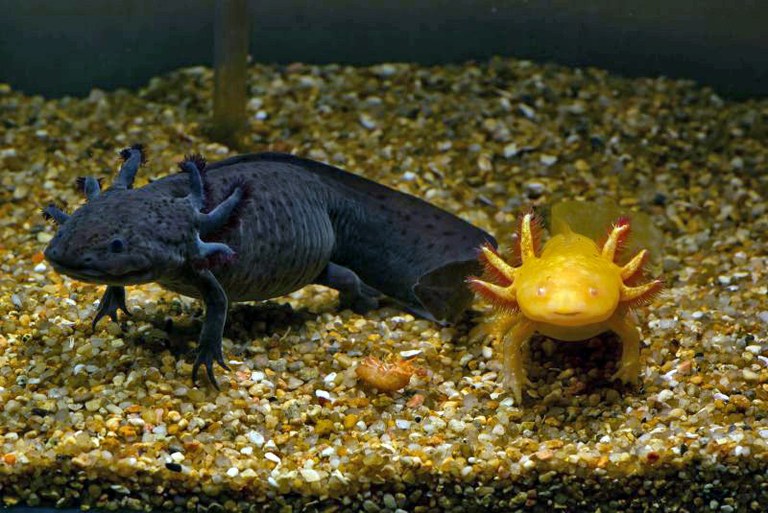 
This isn’t exactly a new discovery, but we haven’t seen any mainstream aquarist magazine or blog report about this … and it’s simply too fascinating not to share this fun tidbit of science.  Axolotl keepers may already know about this, but for the rest of us here’s the story.

Axolotls (Ambystoma mexicanum) are often thought of as one of the cutest animals on Earth and thus make popular aquarium pets.  These Mexican amphibians retain their juvenile frilly puppy-like appearance for their lifetime (a rare condition called neoteny), yet are able to reproduce with other axolotls.  Talk about Peter Pan syndrome!

Scientists discovered something awesome about axolotls: If you administer the right dosage of iodine, the adorable little water dogs morph into water monsters resembling tiger salamanders!  Yep!  This is a real life analog of the classic horror/comedy movie where adorable furballs morphed into Gremlins if they make contact with water.

With a dash of iodine, axolotls can morph into a creature resembling mature tiger salamanders.  Photo by Carla Isabel Ribeiro

Axolotls are a divergent evolutionary branch of salamanders.  They resemble the juveniles of tiger salamanders.  The difference is, unlike most salamanders, axolotls lost their ability to produce thyroid stimulating hormones (likely due to environmental adaptation).  These hormones are responsible for triggering metamorphosis in other amphibians, so without them, axolotls live their lives in eternal youth.  According to wikipedia:

Neoteny has been observed in all salamander families in which it seems to be a survival mechanism, in aquatic environments only of mountain and hill, with little food and, in particular, with little iodine. In this way, salamanders can reproduce and survive in the form of a smaller larval stage, which is aquatic and requires a lower quality and quantity of food compared to the big adult, which is terrestrial. If the salamander larvae ingest a sufficient amount of iodine, directly or indirectly through cannibalism, they quickly begin metamorphosis and transform into bigger terrestrial adults, with higher dietary requirements. In fact, in some high mountain lakes also live dwarf forms of salmonids, caused by deficiency of food and of iodine, in particular, which causes cretinism and dwarfism due to hypothyroidism, as it does in humans.

Only when axolotls are exposed to hormone-inducing compounds like iodine do their genealogical lineage become unmistakenly apparent.  It is also interesting to note that this artificially induced metamorphosis creates salamanders that are listless and do not live very long.  For more information on this strange phenemenon and a stern lesson why aquarists should not try to make their axolotls metamorphisize, read this article at axolotls.org.