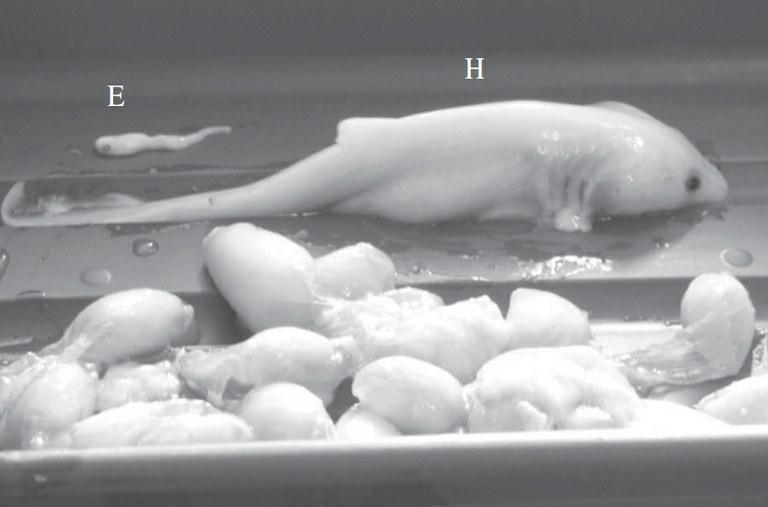 .Size differential between the hatchling (H) and an embryo (E) from the same uterus in one of the litters we sampled. In all five litters sampled prior to EC, we observed a similar size differential.


Ed Young over at National Geographic posted an awesome piece yesterday on baby sand tiger sharks. It’s a definite must-read on this in utero phenomenon with sand tiger shark breeding and birthing behavior.

The first embryo to emerge in each uterus—the ‘hatchling’—always cannibalizes its younger siblings. It’s so voracious that at least one scientist has been bitten by a sand tiger pup while unwisely sticking a finger in a pregnant female’s uterus.

The cannibal not only nourishes itself on its siblings’ bodies, but also gains sole access to the nutritious supply of unfertilized eggs that its mother provides. On this rich diet of yolk and flesh, the hatchling grows at a tremendous pace. When it is eventually born, it’s already a meter in length—that’s big enough to protect it from many predators. “Only really big sharks eat baby sand tigers,” says Demian Chapman from Stony Brook University in New York.

Head over to NatGeo’s Phenomena: Not Exactly Rocket Science page and read all the gorey details.