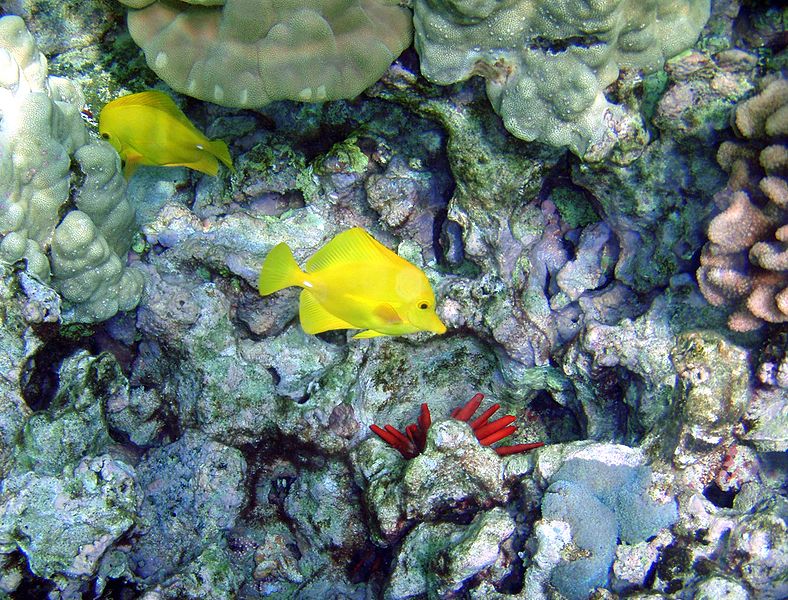 For the Fishes is an advocacy group based here in Hawai’i that has been one of the leaders in the movement to ban fishing for the aquarium trade in the Hawaiian Islands. I recently had an exchange with For the Fishes on their facebook page which I hope adds a useful voice to this discussion and which I have reproduced below. This post is from a conversation that had already begun, so my apologies if parts of it seem somewhat disjointed–they are in response to previous comments made by For the Fishes.

Update: It seems that a dissenting voice (or at least my dissenting voice) was not appreciated by For the Fishes as this comment was deleted from their facebook page not long after I posted it.

For the Fishes, you’re putting an awful lot of words in my mouth. You ask what my bias would be on ocean acidification (OA) if my hobby were mining coal? Well, I would give up mining coal because it’s causing OA. Likewise, if or where I see the aquarium trade causing harm I have and will continue to actively work to prevent it.

You seem to suggest that having kept aquariums in the past means that I cannot have an objective view on the impacts of the aquarium trade and am biased in favor of it. However, I’m also a diver, I support reef conservation (and that of other ecosystems) through speaking, writing, and financially (albeit on a grad student stipend). I eat fish and used to fish when I was younger. Over the last 5.5 years as a graduate student I’ve worked very long hours for very little pay to improve our understanding of how reefs will react to climate change and OA, and what we can do to help mitigate those impacts. It’s no exaggeration to say that I’ve dedicated much of my life (and will dedicate most of the rest) to coral reefs. What connects all of these activities is my love of reefs and the ocean. There’s no place I would rather be than on a coral reef.

Your suggestion that I therefore cannot have an objective view on the aquarium trade or its impacts here in Hawai’i takes extraordinary chutzpah. Don’t you for a moment suggest that I don’t care about protecting our reefs.

In my view, the guiding principle that we as a society should work off of is that we must protect the health of our reefs (and many other ecosystems) for the future. Everything else is subordinate to that. I also recognize that people around the world are going to continue fishing, primarily for food and as a distant second for aquariums. We need to figure out how to ensure that fishing for whatever purpose is sustainable and does not damage the reef or the populations of fished species thereby imperiling the future.

You say that I defend access to wild-caught fish for the aquarium trade and see it as my right to keep them. Firstly, I did neither, you’re putting words in my mouth. Second, I see access to these species as my right only insofar as this right is at least of equal standing as that of a fisherman who catches, kills, and eats those same fish. It is at least as ethical if not more ethical for me or anyone else to provide a decent life to a reef fish in captivity for years as it is the right of a fisherman to spear the same fish and throw it on the barbeque. It is my view that both the aquarium hobbyist and recreational fisherman should be allowed to have access to these fish IF AND ONLY IF that access is sustainable (i.e., does not diminish the resource over time).

Personally, it really disturbs me seeing all these wonderful fish killed and eaten. I recall vividly the first time I saw a stack of palani (Acanthurus dussumieri) in the grocery store, whole and ready for sale. A friend of mine many years ago spent on the order of $10K setting up a huge aquarium specifically with the intent of one day obtaining this species of fish and providing it a good home, which he eventually did. Seeing so many of these majestic, beautiful animals laid out dead before me, sold for a few dollars, and killed to provide lunch to one or two people made my heart drop. However, I understand that people fish, and where there are coral reefs that means fishing for reef fish. My personal displeasure at seeing a stack of dead palani is NOT a sufficient reason to ban fisherman from catching them. Instead I, and we all, need to look at these situations objectively and ask questions about the sustainability of the catch, not whether the fact of it is personally distasteful to each of us.

This gets to the heart of the issue for me and hence my confusion on your position. I don’t understand why you seek to ban fishing for aquariums, which removes a few million fish from our reefs per year, but you completely ignore recreational fishing which removes tens of millions of fish from our reefs per year. Banning aquarium fishing doesn’t solve the problem of overfishing our reefs and on top of that is unethical. Why should one group of fisherman which kills their catch, often in rather grisly ways, get your implicit support while another group of fisherman which does not kill their catch garner your wrath?

The problem of overfishing our reefs is real. I am especially reminded of one of our local reefs, located a few miles from my home here on O’ahu. I’ve done work out on this reef, and there’s a great beach there so I make it over fairly often. While there is plenty of healthy coral, there’s far more fleshy and filamentous algae than there should be, and sure enough I’ve rarely seen a fish larger than a few inches there including almost no large surgeonfish or parrotfish. Very likely it’s the overfishing of the herbivores that is driving the excessive algal growth, especially near shore. I have never, not once, seen an aquarium fisherman at this reef. I don’t recall ever being there without at least a few recreational fisherman fishing (by pole and by spear). Your position of banning the aquarium trade while ignoring recreational fishing ensures the longterm collapse of this and many other reefs and ensures the longterm survival of absolutely none of them. I think that’s what bothers and confuses me the most about the position you’ve taken—it expends huge amounts of political capital and doesn’t solve the problem that you and I would both like to solve, which makes actually solving that problem in the future so much more difficult.

Having said all this, I would ask you to join with me in getting effective policies in place that really will protect our reefs. Too many reef fish are being taken from our reefs each year, I totally agree. For the health of our reefs, and the continued ability to fish (i.e., sustainability) we need to provide meaningful protection. The scientific literature on these issues is fairly straightforward: one of the most effective policies we can put in place is establishing large Marine Protected Areas (MPAs). About 35% of the Kona coast is now closed to at least some forms of fishing. This is a great start. From the data we have in other places (Florida, Great Barrier Reef, etc.) this is about the right approach and our reefs and fisheries would be substantially healthier if we were to create no-fishing MPAs covering about 30-40% of our coastlines. One of the great benefits of this approach is that within a few years the enhanced reproduction within these MPAs provides spill over to other reefs thereby enhancing the fish densities on those reefs as well. With some areas completely protected from all forms of fishing we end up with more fish everywhere which is good for everyone that cares about coral reefs or uses reef resources. There are more fish for divers to see, there are more fish in the fished areas, reducing the impacts of fishing for whatever purpose, and the reefs and reef fish populations become more resilient as a result. Creating MPAs alone isn’t sufficient, but is a huge piece of the puzzle of protecting reefs and reef fish. This is the right approach and benefits everyone. Banning the aquarium trade is simply not an effective way to protect our reefs or fish populations. It helps nothing and hurts many.

I know your heart is in the right place, so please, join with me in advocating effective protection of our reefs through the expansion of MPAs on all islands.