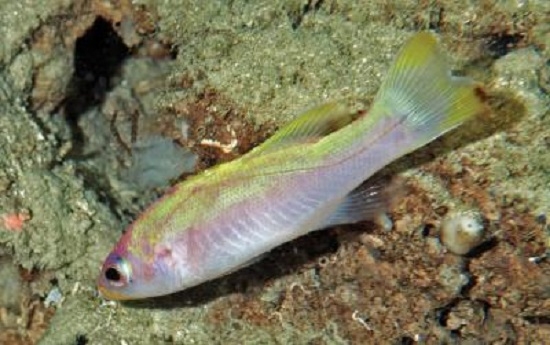 A gorgeous  new Liopropoma  species has recently been discovered in the Caribbean. The new species, Liopropoma santi now dubbed the  “Spot-tail Golden Bass” has a striking mostly yellow-gold body and shares many physical similarities to other recently discovered deep water “Golden Bass”.  In fact, scientists originally thought the fish was the Liopropoma olneyi due to their nearly identical morphology and not a new species at all.   Liopropoma santi  was only identified as a unique species after extensive DNA analysis.

“This under explored zone between 60 and 300 m in the tropical southern Caribbean is revealing extraordinary biodiversity, including a wealth of new species of beautifully colored fishes. It’s a zone that science has largely missed because it’s too deep to access using scuba gear, and deep-diving submersibles rarely stop at such shallow depths.” said C. Baldwin, one of the researchers begin the discovery.

Over the past few years deep water Caribbean Bass like Liopropoma aberrans , have become the must have rare fish for high hard core aquarium enthusiasts. With some specimens commanding prices of  $9,000 or more. As such, it is probably just a matter of time until a Spot-tail Golden Bass ends up in a high-end rare fish buff’s reef tank. MORE