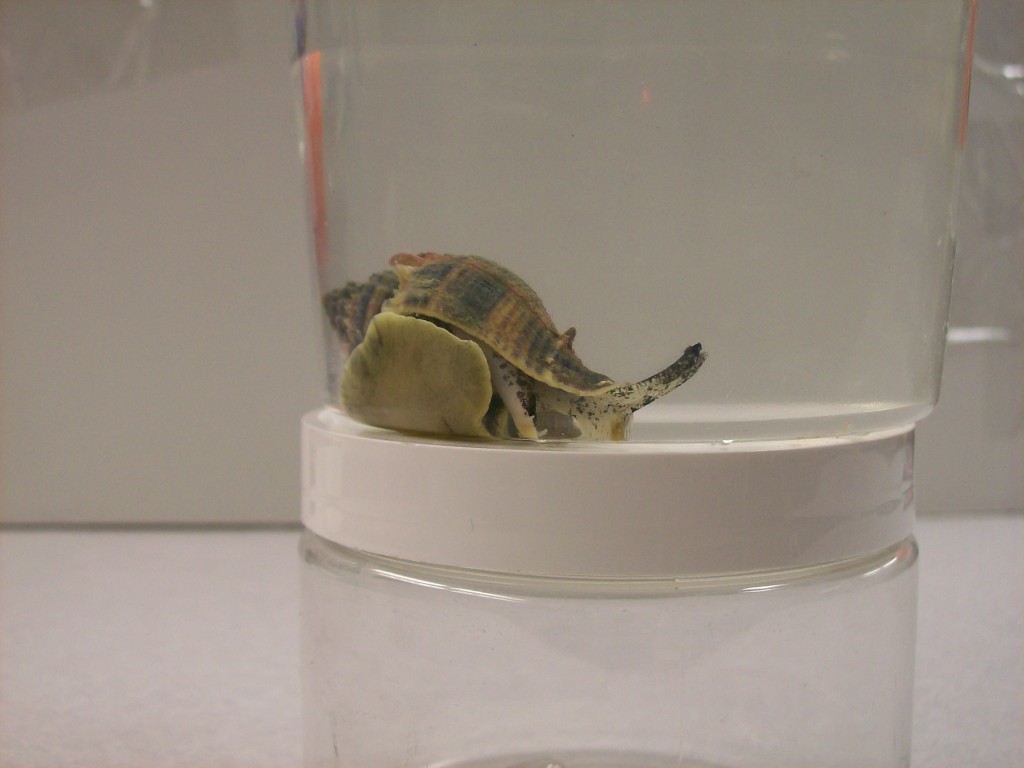 As more newcomers enter the hobby, it seems that more livestock retailers enter the industry. Unfortunately, this means that some new businesses may be in it purely for the profit, and lack of knowledge or greed on their part may put your current livestock at risk. Would you know the difference between a Whelk and Conch? Read on after the jump…

I use these two because I’ve noticed an increased demand for the Fighting Conch. I think it’s great that people want these interesting snails as a big part of their clean up crew, and the snails are great at keeping your sand and lower glass algae-free. Unfortunately, many collectors do not know the difference between a Conch an its cousin the Whelk. For the purpose of this article I’m going to focus primarily on the Florida Fighting Conch and The Common Mud Whelk.

But I’d also like to take the time to warn against purchases of Nassarius vibex on auction sites like Ebay. I’ve seen auctions of 50, 100, 150 Nass. vibex for as little as $0.10 each. It’s hard to pass up a deal like that, especially when considering that reputable livestock retailers are charging anywhere from $0.70-$0.80 each and LFS will charge up to $1.99 per snail. Unless you know for a fact that the seller is both knowlegeable and reputable I would not chance the purchase and risk my current snails and bivalves on the chance that I’m actually purchasing juvenile mud whelks. When they are this small, 1/4″-3/4″, only the most trained individual can determine the species by inspecting the shell. I’ve known people that have made such purchases, only to have the new snails immediately begin to kill off the existing snails in the clean up crew. They’ve even been responsible for killing and consuming prized Tridacnid clams and other bivalves. Always ask questions and for close-up images before you bid and do a little research. Or do like I do and just stick to well-known, reputable vendors and collectors.

The differences between  Conchs and Mud Whelks are really pretty big and identification is easy as long as you keep one thing in mind. I’ll get to that in a bit. Today I was window shopping a local LFS and I come across a tank labeled Fighting Conch $24.99. There  was nothing in the tank, but that didn’t really concern me since they will bury themselves in the sand. I simply found an employee and asked if they had any Conchs left for sale. He assured me they did. Then he said “you gotta see this, it’s really cool!” He then took a gold fish, killed it and dropped it into the tank. Immediately the sand began to bulge and about 10 or 11 snails literally rocketed out into the open. “Nice big snails, great for sand stirring, cleaning algae and leftover food” is what the employee said with a smile. “They’re Whelks” I said. A debate ensued and I wasn’t able to make my case. Instead, I purchased one of the Whelks and when I was asked why I’d want one if they are killers, I simply replied “I must be mistaken.” Really I just wanted to get the snail so I could photograph it for identification purposes.

Let’s take a look at the similarities and differences between the two species and hopefully you’ll see how easy it is to determine the difference and make a positive ID before you buy and add a predator to your tank. 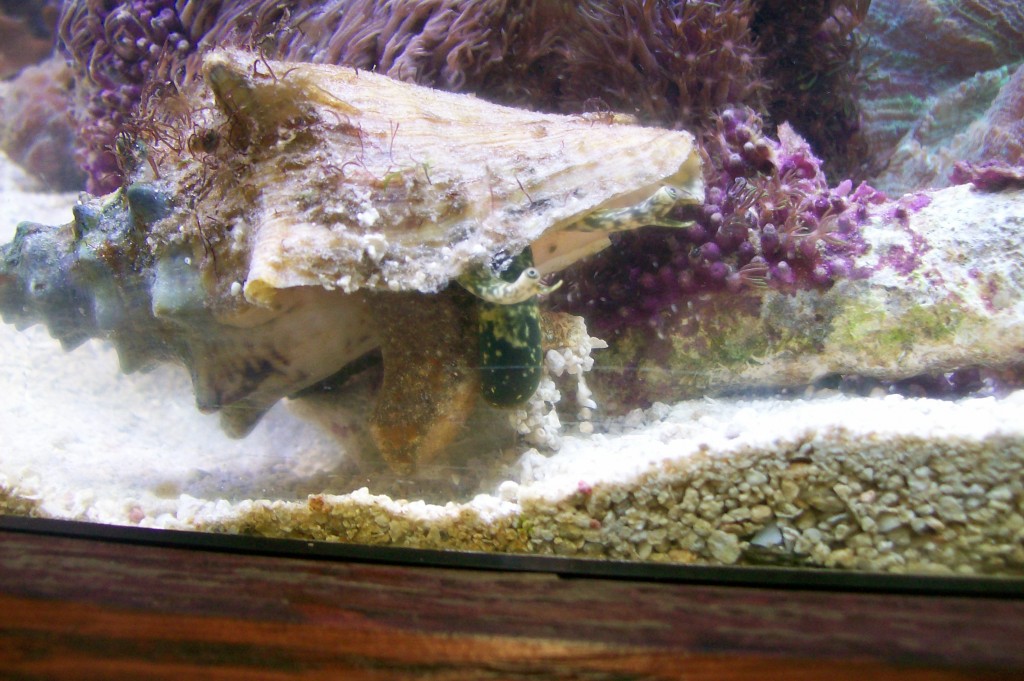 They get their name not because they are mean critters but because the shape of their shells resembles the helmets Roman Soldiers or gladiatiors wore.

There are around 200 known species of Conch with literally hundreds of subspecies. Only 3-10 of those are found in or available in the hobby. They come in a variety of colors and the largest of them get about 16 inches in length. Their shell is biconical in shape with low spires. The aperture, or opening, is ovoid or rectangular in juveniles and becomes flared as they reach maturity. The outer lip of the aperture is thickened, often with flaring spines or projections. The biggest giveaway when making a visual identification is the long eye stalks with a very noticeable complex eye on the end of each. 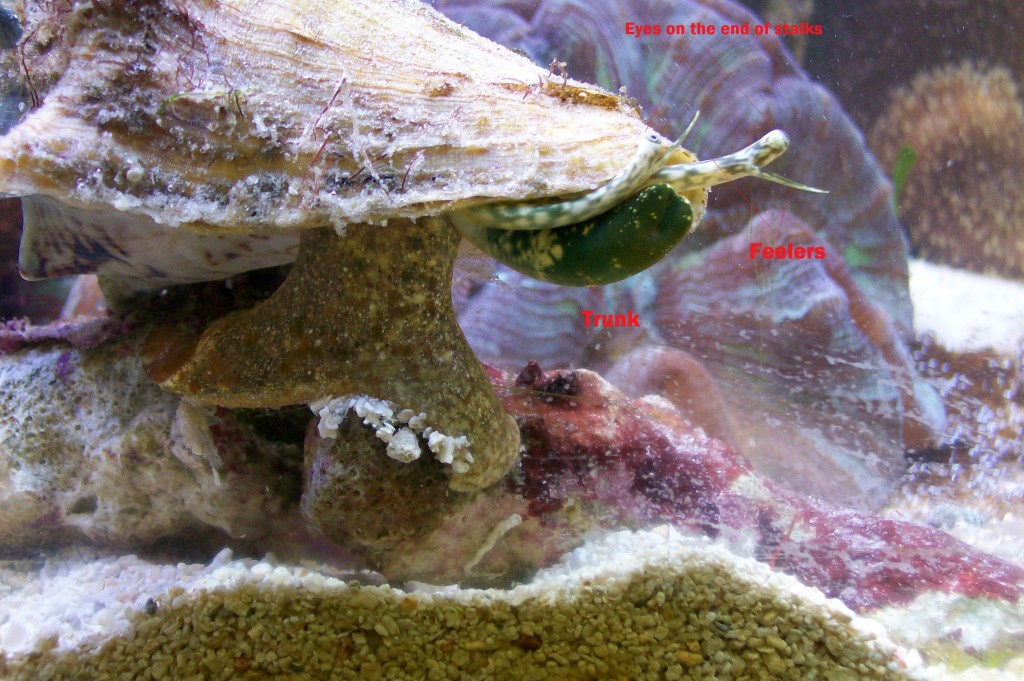 Notice the complex eye at the end of each stalk

Stromboidea are the only known family of snail that have these eyes on the end of the stalk.  Their diet consists only of algae and they are incapable of eating meat. 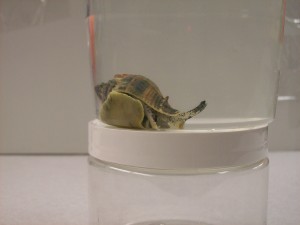 To the untrained eye this snail is easily mistaken for their Conch cousin. Shell shape is nearly identical and if you go by that mode of identification you really need to know what you are doing. Because of the conical shape and spiny protrusions the two snails are very similar in appearance. Take a look at the rear end view of the Whelk. 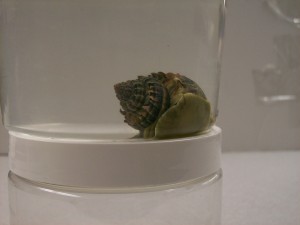 Like the Conch, they have variances in color and the rear cone of the shell is biconical, but that is where the similarity ends. Whereas the Conch only has low spires, the Whelk will have both low and high. The rear of this particular snail looks very vicious,  almost spiky and sharp.

There are 10,000+ known species of Whelk with an unknown amount of those available and found in the hobby. Even though the snail in the image appears large, it is actually a sub-adult. Right now it measures about 2″ in length but some Whelks are known to reach shell lengths of 24″. The aperture of Whelks is ovoid to teardrop shaped, sometimes rectangular which complicates identification by shell alone. The aperture will rarely flare in adults. The outer lip of the aperture of the Whelk is often thickened and displays many dents and small knobs. 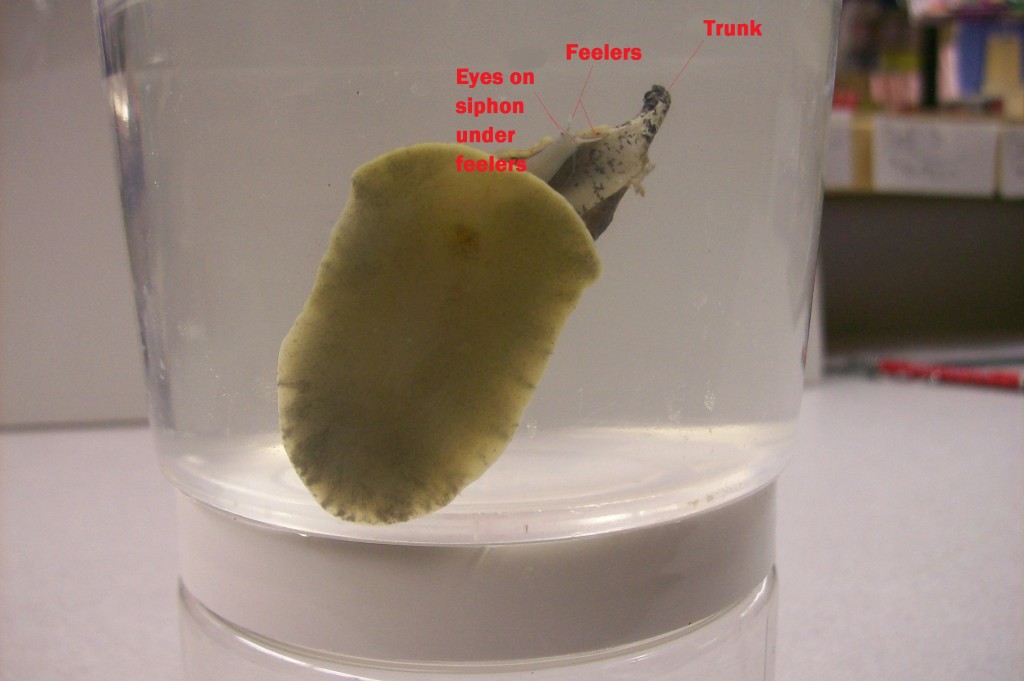 Notice the lack of eye-stalks and complex eyes

The dead giveaway is the lack of the eyestalk and complex eye. Remember, Stromboidea are the only snails to exhibit this feature. The eyes of Whelk are found on the end of the siphon, below the feelers, and appear as a small black dot on either side of the siphon.

The whelk is a predatory snail and only eats meat. It is incapable of eating algae or plant material. Being carnivorous, they will scavange dead flesh or will hunt, kill, and consume any live prey they are capable of capturing.

So if you are considering adding a Conch to your system I highly recommend that once the new snail arrives at your home you quarantine it long enough to give it time to feel comfortable enough to stroll around a bit. Look it directly in eyes and make the easiest identification possible.