There’s only one species of anemonefish recorded from the Red Sea, so, in theory, there should be no great difficulty identifying the fish seen in this video. Is it from the Red Sea? Is it swimming in an anemone? Well then, we’ve got ourselves an Amphiprion bicinctus. But it would seem that not all are created quite the same, as this individual has an unusually dark body and just a single stripe, giving it a rather frenatus-like appearance. 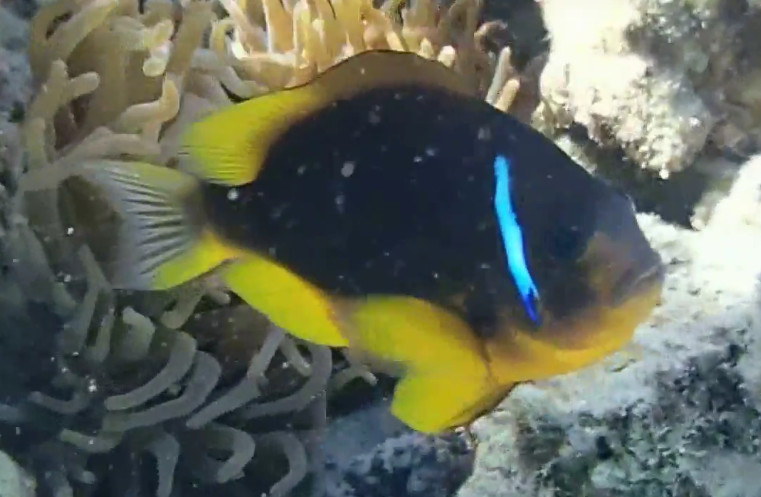 It’s clearly still A. bicinctus, but not like we are used to. The prototypical Red Sea Anemonefish is a cheery yellow-orange, with a brown back and two thick white stripes. Instead, what we have here is a fish that is virtually black throughout, with only the fins retaining the bright yellow hues we would expect of this species. The middle stripe has almost completely disappeared and the anterior stripe is highly reduced and disconnected above the head. The caudal fin is also quite unique, with yellow margins and a sooty interior. Incredibly, this same fish has been filmed in the same anemone by two different recreational divers.

There are some other interesting aberrations of this fish. The next video, from Marsa Alam, Egypt, shows a specimen that is completely lacking the middle stripes, but without the heavy melanism of the previous example.

The clear caudal fin has also been documented elsewhere. The following two videos show one from Dahab, on the Sinai Peninsula and another from an unknown location.

It doesn’t seem like there’s any evolutionary significance to these variations , as the normal phenotype occurs alongside the aberrations. The next few videos show specimens from Makadi Bay, where the black bicinctus was found.

And here are some from several locations in Saudi Arabia.

And here are are some from Djibouti, at the far south of the Red Sea. These seem essentialy the same as elsewhere, though I’ve yet to see any with the dark body and thin stripes found in the north.

And, just for funsies, here are some more videos from Sudan and other Egyptian locations.