On May 19, Advanced Aquarist reported that Banger’s Berghia nudibranch breeding book is available from Premium Aquatics and that those interested in learning how to breed them may benefit from the information published within its pages. After posting about the new book, I ordered a copy, as I was curious about his breeding setup and techniques. 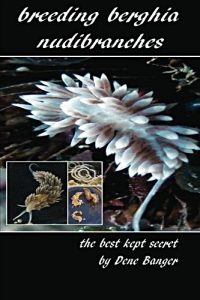 ‘Breeding Berghia Nudibranches’ is a 140 page black and white book documenting how to rear Berghia nudibranchs from egg strand to adult.

Dene Banger was the owner of Sea Life Aquaculture Inc. based out of Kitchener, Ontario, Canada, where in addition to breeding seahorses and Banggai cardinalfish, they bred Berghia nudibranchs by the thousands. The book did not contain an author biography, so here is what Amazon has to say about the author: “Dene Banger is an experienced saltwater hobbyist that turned a passion into a small aquaculture business. Applying his experience from years of automotive engineering with his passion for breeding marine organisms he designed and built his own systems and has successfully bred several species of seahorses, the Banggai Cardinalfish and the Berghia nudibranch.” Banger was also active on the Sea Slug Forum for a couple of years and had many discussions about the Berghia nudibranch with other professionals on the listserv.

As mentioned in the book, the Berghia nudibranch was reclassified in 2005 from Berghia verrucicornis to Aeolidiella stephanieae. The author, however, continues using the old genus classification throughout the book since this is how most reef hobbyists know them. I will too for consistency’s sake. 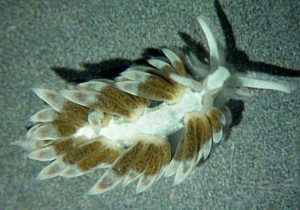 For those new to the subject, the Aeolidiella stephanieae nudibranch (colloquially referred to as the Berghia nudibranch in the hobby) is used to deal with Aiptasia spp. anemone infestations. Their sole food source is the Aiptasia anemone, and they eat them with gusto. They are hermaphroditic (each specimen has both male and female genitalia) and readily breed in captivity so long as there are at least two adults. It is a challenge to grow them to saleable lengths of ½ to ¾ of an inch (12 to 19 mm) in a significant quantity because it takes 4-6 weeks from hatching to reach this size. A breeder needs to have a breeding and grow-out system conducive to retaining large numbers of the tiny Berghia larvae without them accidentally being sucked into the filtration system. Another requirement is to have a large population of Aiptasia anemones to feed their voracious appetites. Herein lays the challenge.

As the title suggests, “Breeding Berghia Nudibranches” documents the system design and maintenance for breeding Berghia nudibranchs for fun and profit. The first 30 or so pages deal with basic Berghia anatomy and physiology, husbandry, marketing, and shipping. The remaining ~100 pages deal with system design and maintenance for Berghia and its Aiptasia food source. Three systems are presented: a hobbyist system, an intermediate system, and a semi-commercial system. Additionally, a system is described for growing Aiptasia spp. anemones as the Berghia’s sole food source.

The book delivers on what the author states: it shows how to setup a simple, modular, hobbyist system for breeding a few hundred Berghia. It also demonstrates how to increase the Berghia output by increasing the number of breeding modules that plug into the existing breeding setup. Each breeding module connects to a central sump that provides filtration (skimmer, heater, etc). Ten modules plug into one common sump, and each module can produce 100-400 saleable Berghia every 4-6 weeks. By adding more modules and sumps (when needed), the hobbyist can scale their system(s) to meet demand. The overall design is straight forward, and planning went into making it simple, pluggable, and mobile. If there is a problem with a module, it is easy to remove it from the system and perform maintenance on it without affecting other breeding tanks. Parts for the system can be purchased from a local fish store, online, and from a local hardware store like Home Depot or Lowes. The construction is written in detail; Anyone handy with power tools can put a system together in a weekend, assuming he or she has all the required parts at their disposal. After setup, it is a waiting game until the farmed Aiptasia population increases to a point where it can sustain a breeding population of Berghia nudibranchs.

According to the book, the real trick behind the entire system is scaling the Aiptasia anemone farm in order to feed the growing Berghia population. If Aiptasia output cannot keep pace with Berghia demand, one will have either to severely cull the existing Berghia population or liquidate the excess Berghia at below market prices in order to downsize to a manageable level. It is not as if a breeder can go to the local fish store and buy a couple hundred Aiptasia anemones for their Berghia to eat as a hobbyist can with goldfish for an Oscar. The breeder has to stay ahead of the game at all times. Banger explains how to induce the existing Aiptasia population to reproduce at a faster than normal rate in order to scale-up its output. It is a bit odd wanting Aiptasia to spread and grow faster (?!), but since they are the sole food source for Berghia, this is a high priority. What is interesting to me is how large the Aiptasia farm needs to be in relation to the number of Berghia breeding modules in a breeder’s system. As an example, the author provides a floor plan for a semi-commercial setup with ten Berghia breeding modules producing a combined total of 1000 – 4000 saleable Berghia monthly. One-eighth of the floor plan is the Berghia breeding and grow-out system. Another eighth is worktables, storage, and a brine shrimp hatchery for feeding the Aiptasia. One fourth is for boxing and shipping. The other half of the floor plan is the Aiptasia farm. Berghia eat a lot of Aiptasia! 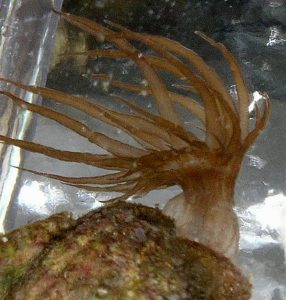 Since Banger states that his design is new and unique compared to how others are breeding Berghia, I decided to check the Marine Breeding Initiative (MBI) website to see if there are hobbyists using similar methods for breeding Berghia or other organisms like shrimp. In all cases I found hobbyists using bare-bottom tanks or tanks with simple sponge filters with a bit of crushed coral substrate. Banger’s system, while basic, is more involved than I have seen others using at the MBI. A very basic view of his setup would be akin to an undergravel filter system with crushed coral substrate with a way to pull water out from the interstitial space under the filter plate. This water then flows to a central sump containing filtration equipment and then back to the larval tank. While I cannot comment on whether this system works as advertised, it is certainly more “advanced” than what hobbyists are using. Banger states this is how he ran his Berghia breeding business for years in Canada, producing a couple thousand Berghia monthly.

Now for the things I did not like about the book. These are all editorial in nature. I mention these problems since I want to present both the good and the bad so that the reader can make an informed decision about spending $20 for this book. Here were some of the issues I found:

It is because the author chose to self-publish instead of using a publishing house that these issues exist. Had the book been published through a traditional publishing house, the aforementioned problems should have been resolved. CreateSpace (an Amazon.com subsidiary), which Banger chose to publish his book, gives an individual the tools to self-publish their works, get placement on Amazon.com, and become listed in additional book distribution channels. Anyone can publish their own book using CreateSpace. The downside is that the author is completely responsible for everything that a traditional publishing house would normally take care of: proof reading, cover art and design, marketing, sales, distribution, etc.

I do not want the reader to walk away from this review believing that self-published works are unacceptable. Quite the opposite, I wish more hobbyists would choose this route! Self-publication is a viable way for individuals to distribute information in a consolidated format on specific topics. April Kirkendoll, Martin Moe, Jr. and Advanced Aquarist’s editor Terry Siegel chose the self-published route years ago when information was not easily available in the marine aquarium hobby. Self-published works may not be the most polished product, but they are accessible all-in-one volumes. The alternative is for individuals to piece together information from numerous forum posts, personal emails, conversations, articles, etc. into a method for doing something specific like breeding Berghia, building equipment, or caring for azooxanthellate corals – all of which is time intensive, confusing, and error prone.

The criticism about the black and white photos is a bit nit-picky, as I have grown accustomed to aquarium publications having full color interiors. This can be forgiven, however, as I am certain Banger is trying to hit a certain price point with his book. Publishing the interior photos with 100% color would have added significantly to the cost, especially since the book is self-published.

Even with these caveats, I believe that this book is still beneficial to the hobby, and persons interested in breeding Berghia would find this book useful if nothing more than using it as a springboard to learn a new technique. At this point, it looks as though Mr. Banger is no longer in the aquaculture business, so maybe this is why he has chosen to publish his “best kept secret” for the general public.

Incidentally, the book is also available from Amazon.com (aff) for the same price that Premium Aquatics is selling it for on their website (an Advanced Aquarist sponsor). We highly recommend that if you do purchase the book, you purchase it from our sponsors as they keep this website free for everyone to read.