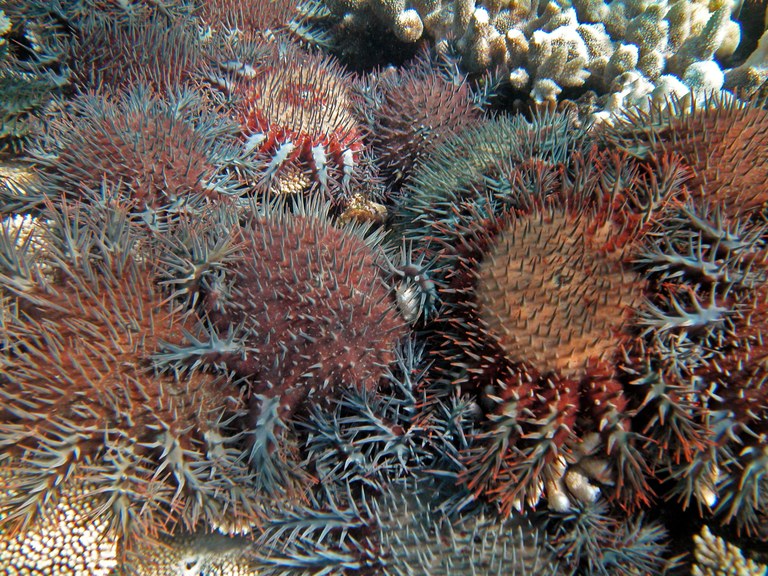 The deadly crown-of-thorns starfish devours stony corals in its path.


Just days after a paper explaining how the Great Barrier Reef has lost over half of its coral in the last 27 years (pdf), MP Bob Katter wants to pay public divers to help control this scourge of the reef. According to the report, crown-of-thorns starfish are said to have caused 42% of the overall coral loss, which makes them an easy target for countermeasures.

“I really think governments of both sides should have got on to that issue decades ago,” said MP Katter.

While this is great in theory, crown-of-thorns starfish are also dangerous to divers as their spines contain “saponins” or detergent-like molecules that can cause a sharp, stinging pain if a diver’s hand or body part are punctured by the spines. Pain can last up to a week or more and spines can break off in the skin. If lodged deep enough, these spines may need surgically removed. Crown-of-thorns starfish need handled with care.

Currently, control programs are run by the government with trained divers injecting crown-of-thorns starfish with sodium bisulfate which is toxic to the starfish.

MP Katter’s plan is somewhat reminiscent to the lionfish derbies that are held in Florida throughout the year to help control invasive lionfish populations. In his plan, the diver with the most kills would be crowned (no pun intended) the Australian starfish champion.

“We can do something about the starfish so we need to address that,” Katter said. “I’m going to go to all the different councils to get them to consider pooling their resources together, and then we’ll get the Federal Government to match it with a grant for the starfish champion” he stated. “It will [also] stimulate scuba diving on the reef.”

The report also stated that if something is not done, the total coral cover could halve again in 10 years.