The deepwater Horizon (BP) oil spill of 2010 has largely been written off by the media and its perpetrators as “dissipated” or “contained,” yet the affects of releasing millions of gallons of oil into the sea are still wide reaching, says a team of researchers from Penn State University. Charles Fisher, professor of biology at Penn State University framed the issue stating: “The footprint of the impact of the spill on coral communities is both deeper and wider than previous data indicated. “This study very clearly shows that multiple coral communities, up to 22 kilometers from the spill site and at depths over 1800 meters, were impacted by the spill.” Using a remote operated vehicle (ROV) Fisher and his team were able to capture high resolution photo’s of coral communities, finding that the oil had affected marine life further than one had expected from the spill site. 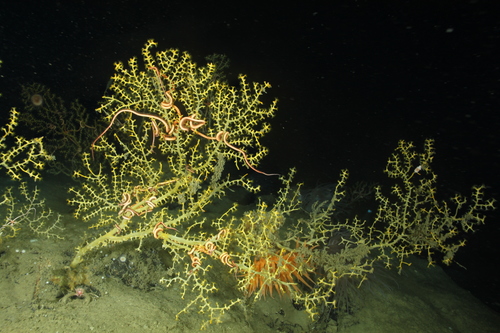 “We were looking for coral communities at depths of over 1000 meters that are often smaller than the size of a tennis court,” added Fisher.“We needed high-resolution images of the coral colonies that are scattered across these communities and that range in size from a small houseplant to a small shrub. With the cameras on board the ROV we were able to collect beautiful, high-resolution images of the corals,” said Fisher. “When we compared these images with our example of known oil damage, all the signs were present providing clear evidence in two of the newly discovered coral communities of the impact of the Deepwater Horizon oil spill.” Read more here.