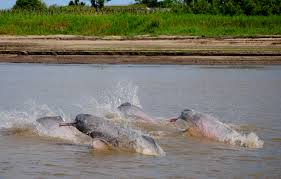 As a biologist I understand the food chain. That being said, the lurid practice of killing dolphins for catfish bait is both unnecessary and barbaric. There are multiple non-marine mammal bait alternatives readily available that commercial fisheries can and do use. Not in Brazil. Until now, catfish fisheries were using river dolphins as bait. The sought after catfish, piracatinga, are lured by using illegally caught dolphins, which are captured and chopped up solely for the purpose of being catfish bait. The dolphins included the pink river or boto dolphins, a second species of river dolphin called tucuxi and the caimans. All of these dolphins have seen declining populations in the past years. Although killing dolphins was already illegal, the activity was not enforced. Effective January 1, 2015, The Brazilian Government has banned the commercial capture of piracatinga for five years, with the goal to become a permanent ban.This is certainly a great victory. MORE