Breaking News! Genicanthus Personatus Has Been Bred in Captivity!

I can’t even begin to tell you all how elated I am to be writing this right now as well as how honored I am to be the person to share this mind blowing news with you!! The “Holy Grail” of fish is finally here. The Genicanthus personatus, a visually stunning, pearlescent-white angel with a striking, inky-black mask and tail, has rarely been seen within the trade. It’s ghostly nature and ethereal appearance put this little number in a class of ultra-rare fish that most people will never see in person. That’s what makes this news so exciting. Biologist Karen Brittain of Hawaii is breeding them successfully in captivity. Numbers are pretty secretive at this point – but we do know that several made their way into Japan, the US and the UK. I’ve been incredibly lucky to have set eyes on these magnificent angels in person, and hope you all get a chance to do the same. Featured below we have a press release issued by Larry DuPont of Reef Frenzy, the exclusive food used for the project with a plethora of details, from collection to breeding, along with some seriously fantastic video and pictures for you to ogle at, enjoy! 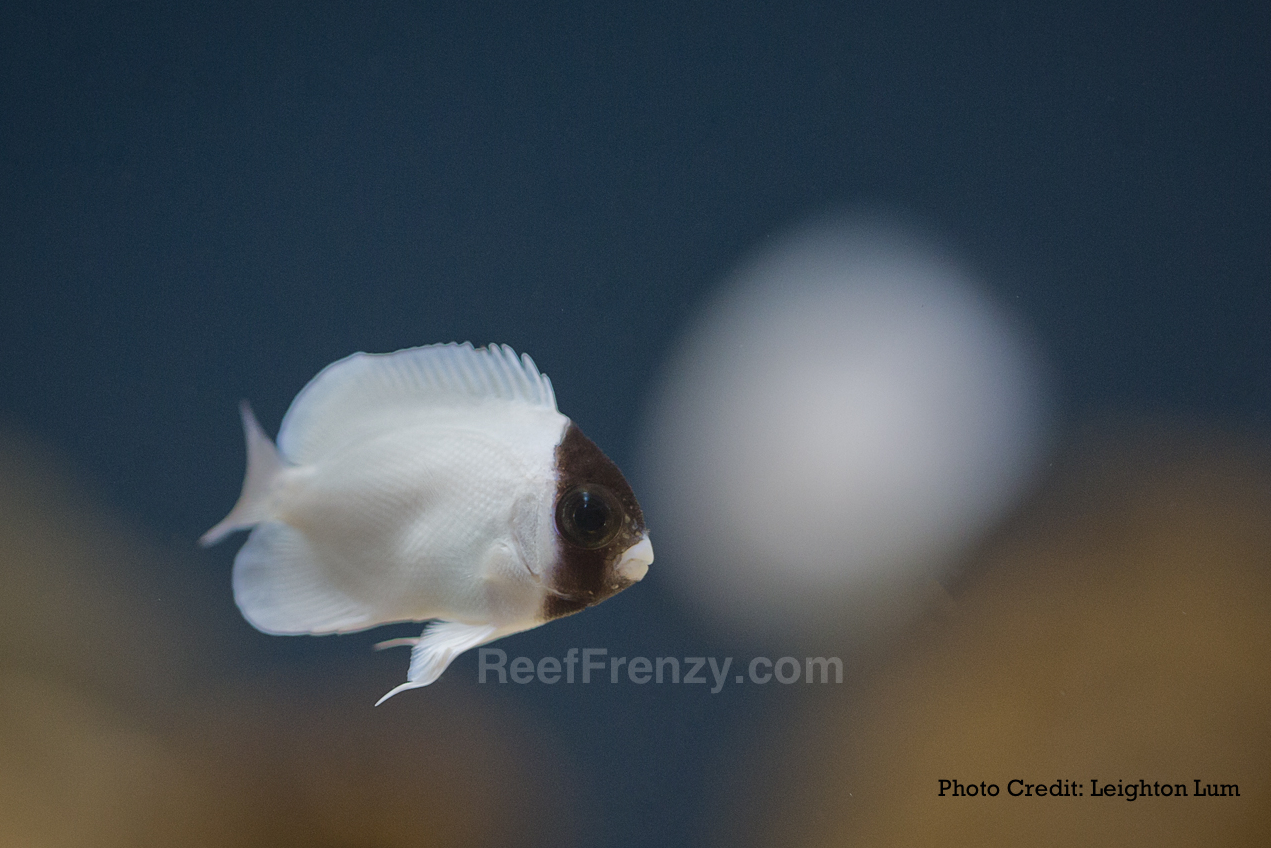 Many people in the hobby consider the Peppermint Angelfish to be the ultimate “If money was no object, I would have one” fish. However, there is another ultra-rare angelfish rarely encountered in the hobby and often referred to by prominent figures as “the holy grail.” This would be the Genicanthus personatus or Masked Angelfish.

The G. personatus is seldom seen in the trade and when specimens are located the price is out of reach for all but the most elite exotic fish collectors. The last collected pair was listed for sale at a starting price of nearly $30,000. A Google search reveals very few articles or videos online about this elusive species, which some hobbyists may have never heard of until now.

Well that is about to change….

Veterans in the hobby may recognize the name Rufus Kimura, who is a well-respected deep-water diver who resides in Hawaii. Using special closed-circuit rebreathers and other advanced equipment Rufus and his team risk their lives diving to depths of 400+ feet to collect some of the most sought after fish in the aquarium trade. In late 2013 Rufus was able to collect a pair of mature G. personatus angelfish and deliver them to renowned biologist Karen Brittain. Having a bonded pair of G. personatus under her roof was amazing, but much to the dismay of Karen the male specimen refused to readily eat any foods offered for weeks. A variety of commercial and fresh foods were offered but still the fish refused to eat with any enthusiasm. The decision was made that if the fish did not eat very soon it would be rehomed into the ocean for fear that it would perish.

Ted Krupman (Humaguy on Reef Central) is a collector of exotic marine angelfish and had been feeding LRS Frenzy foods for many months to his prized specimens. His fish collection and experiences are well documented in his lengthy thread on Reef Central. During email correspondence Ted mentioned to Karen that he had been having great results feeding the Herbivore Frenzy® and Reef Frenzy® blends to new arrivals that were finicky eaters. Karen had not heard of LRS previously so she contacted Larry DuPont, the owner of LRS Foods, LLC to order a cooler of foods for her projects. LRS Frenzy foods with probiotics arrived for the first time in Hawaii mid-January. The LRS Frenzy foods were offered to the male G. personatus as a last ditch effort to entice the fish to eat in captivity. Almost immediately it began to consume the LRS foods and shortly returned to the condition and weight it had been at the time of collection. The freshness of ingredients and diversity in the LRS blend had the desired effect of eliciting a feeding response and increasing appetite. 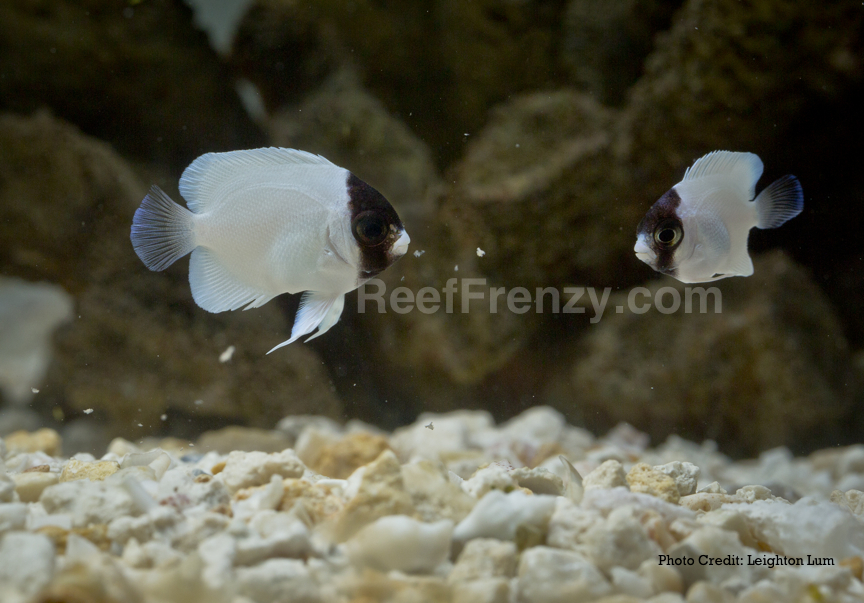 Then the unbelievable happened…

The pair spawned while under Karen’s care!

Karen was able to work around the clock for the next few months rearing the larvae and having an unprecedented hatch of G. personatus angels!

In late April of 2014 Larry received a telephone call from Ted and after being sworn to secrecy Larry was informed of what had been done.  Karen had expressed that LRS foods had a positive impact on the project and she wished to keep feeding LRS foods to the brood stock and eventually the juveniles. Therefore, Rufus and Karen invited LRS Foods, LLC to be a sponsor of what has now been affectionately named the “G. personatus Project 2014.”  Larry eagerly agreed and has been providing LRS probiotic frozen foods to Karen since January 2014.

Since Rufus was scheduled to be a speaker at MACNA 2014 he decided that was the perfect venue to announce this project to the reefing community.

History has been made…

Imagine the significance of the worlds most rare and expensive angelfish being tank bred and the tank-raised juveniles are eating prepared frozen foods. Previously, the purchasers of wild caught G. personatus had to roll the dice and pray the fish would adapt to captivity, which was not always successful.  If this sensitive angelfish can be captive bred who knows what other species can be bred with similar results.  LRS Foods is honored to be involved with this ground-breaking, history making project.

LRS is the only frozen food on the market with lab verified probiotic cultures. Many recently published studies have found boosting foods with probiotic bacteria provides numerous benefits to developing juvenile fish.

Karen continues to use LRS foods in her projects and even named it in April as the “first choice” frozen food of her P. venusta tank bred juveniles in the Rising Tide Conservation blog.

That link can be found here:

LRS Foods will continue to receive exclusive photographs and videos so follow our Facebook and check out www.ReefFrenzy.com for uploads after MACNA!

We sincerely thank Larry very much for the time and passion he’s put into this project, the level of quality that goes into his food, as well as sharing the exclusive details with us. So, how many of these little guys will you be adding to your collection? 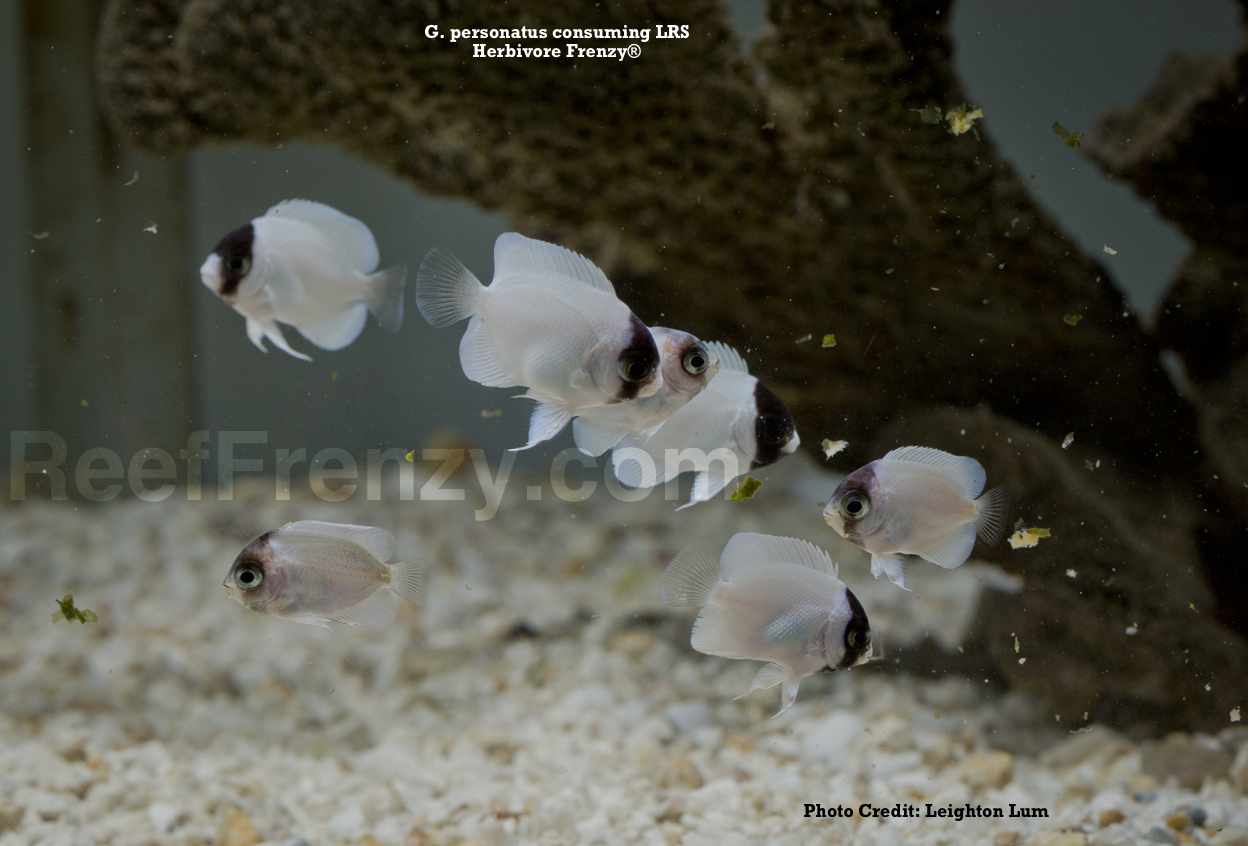