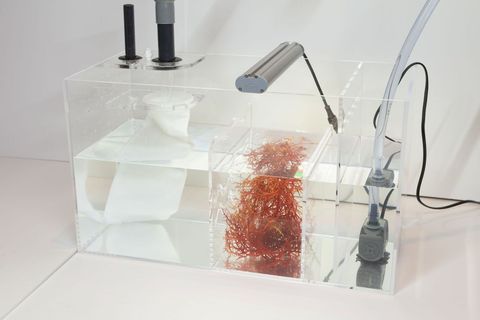 BuildMyLED, an Austin-based aquarium equipment manufacturer that specializes in custom LED lighting options for marine and freshwater aquariums, recently announced their latest product, LED refugium lighting. In typical BML fashion, the light fixtures are offered up in a wide variety of shapes and sizes, with several different beam angle options, a couple of different colors, and in three different spectra also being available. While LED refugium lighting isn’t anything new, BuildMyLED is doing something that most others don’t. They really did their homework, and have designed three different versions of their lights to each grow a particular type of algae. Instead of just making a single catch all type fixture, which is one of the options, their refugium lights are designed to specifically grow either red or green macroalgae. The Universal Spectrum refugium LED might seem like the best choice on the surface, but today’s hobbyists are finding that certain types of algae perform better than others in their specific systems. In my personal tank, I’ve found that my Dragon’s Tongue algae does far better than Chaetomorpha or Caulerpa, though in another system that is similarly designed the green macroalgae have done better. So, we definitely see significant value in targeting a specific type of algae. The custom refugium lights come in eight different lengths, with the shortest being 12″ and the longest being six feet MORE: BuildMyLED Now Offering Refugium Lighting in Three Different Spectra