All animals have some form of warning system that helps them regulate their speed and judge their distance from objects.  This prevents collisions.  Flying and swimming creatures have an extra challenge though; they have to deal with winds and currents that affect their speed and direction.

According to new research, “swimming fish do not appear to use their collision warning system in the same way as flying insects”. This theory is based on something called optic flow.  Optic flow can be described as the feeling that surrounding objects move as you move past them. 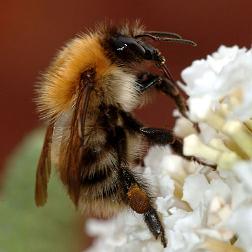 This is how bumblebees see life, it’s as though the bee stays still whilst objects race past them.  The closer the bee comes to an object, the faster the object appears to move (the optic flow grows stronger).  If the optic flow becomes stronger in one eye, the bee will turn away from that side to avoid a collision.

Zebra fish also use optic flow, but researchers found that they in fact swim toward objects rather than away from them.  Researchers from Lund University in Sweden believe the reason for this could be that zebra fish live in a lower viz environment and so they try to stay closer to points of reference which help them with their steering and speed regulation.

This type of research is not just behaviorally interesting, but could also be of benefit to engineers involved with machines that have automatic steering.

For more info go to: http://www.lunduniversity.lu.se