Cabo Pulmo National Park is the most robust marine reserve in the world, thanks to fishing ban 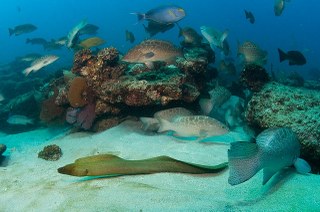 Photo by The Gulf Program CMBC


If the National Park Service needs any more proof that a no-fishing zone is a smart idea for the Biscayne National Park, they needn’t look further than Cabo Pulmo, Mexico.  A team of Scripps researchers have just concluded a ten year study where they conclude Cabo Pulmo National Park is now the most robust marine reserve in the world because of a fishing ban imposed in 1995.  Most of Cabo Pulmo’s big game fish (groupers, jacks, snappers, parrotfish, etc.) were decimated by overfishing in the 80s and 90s.  After ten years of a strictly enforced no-fishing zone, fish populations have increased an astounding 460%!

Local communities once opposed to the no-fishing zone now support it.  Eco-tourism has become big business at the southern most tip of Baja California, and locals now understand that a thriving reef ecosystem means a thriving economy.

Octavio Aburto-Oropeza, Researcher, Scripps Institute of Oceanography, states: “The numbers of jacks, groupers, snappers increase every year because the spawning aggregations or the reproduction aggregations have been protected and they basically are reproducing more and more.  With Cabo Pulmo we have the opportunity to establish how an area that is so productive can restore other areas and other people can receive the benefits, not only in terms of ecological benefits but also in economic benefits.”