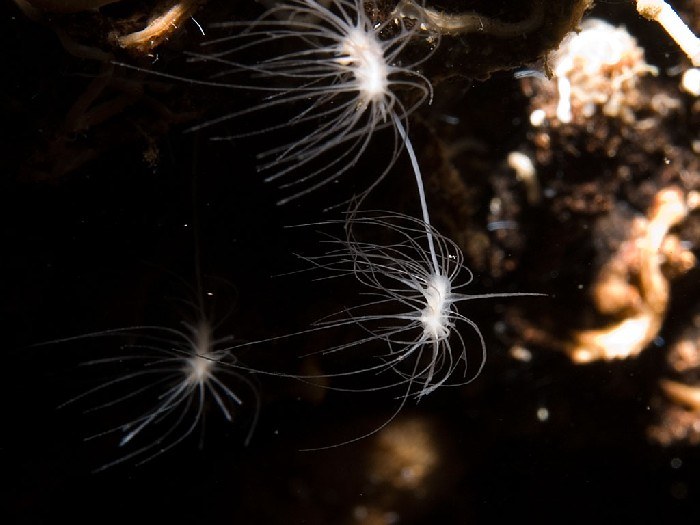 
Sponges are primitive animals without stomachs or digestive systems.  So how do they consume their captured prey?  The carnivorous sponge grows new tissue around their meal, excreting enzymes and – with the help of beneficial bacteria – break down their prey. This is a slow process, often taking more than 10 days.  Just imagine what the unlucky shrimp or crab must experience during this time … something straight out of a horror movie.

Due to the rarity of these sponges, they are protected under the Barcelona Convention.  Read Oceana’s press release for more details about this sponge along with conservation measures to protect them.

Oceana discovers carnivorous sponge, prompting the protection of five areas in the Mediterranean


Oceana scientists, the University of Erlangen-Nürnberg (Germany) and Le Marche-Ancona University (Italy) have identified carnivorous sponges in the deep waters of the Mediterranean in Spain and Italy. The discovery, published in the last issue of the scientific journal Zootaxa, is an important first step toward protecting the areas in which this species lives, while benefiting other ecologically important ones like giant oysters and deep sea corals.

To date, the Asbestopluma hypogea sponge had only been identified in three locations in the entire Mediterranean, in French and Croatian coastal caves between 15 and 26 meters deep. The new discoveries expand its bathymetric distribution to 700 meters and include five new sites.

“The carnivorous sponge is important because it has developed feeding systems that are completely different from the rest of sponges known in the world. Its rareness has made it worthy of protection by the Barcelona Convention for the conservation of this sea,” points out Ricardo Aguilar, Director of Research at Oceana Europe and co-author of the article. “Oceana has decided to disseminate these discoveries through a scientific publication so that public organizations and other NGOs can have access to this information and can use it to promote effective marine conservation measures.”

The Barcelona Convention protects this species in the Mediterranean Sea and, as such, other countries must develop plans for its protection. The Chella Bank seamount (Alborán Sea) has already been selected as a potential area for conservation, so this discovery justifies and reinforces the proposal. Now, the seamounts of Ausias March (Balearic Islands) and Enareta (Tyrrhenian Sea), as well as the Urania Bank and the Linosa Shelf, both south of Sicily, should be added to the proposal.

These sponges have adapted to life in areas where food is scarce, that is why they feed on small crustaceans that take them more than ten days to digest. Until the publication of this article, these sponges had never been identified on the high seas because they are very small (between 1 and 1.5 centimeters) and fragile. Of the five new locations, Oceana discovered two in Spanish waters using an underwater robot (ROV) during its research expeditions.

“The fact that this species has only been identified in eight areas in the entire Mediterranean proves the need to promote marine research in deep waters,” added Aguilar. “Faced with this lack of information, Oceana has been using an ROV since 2006 to achieve the protection of not only shallow, coastal marine areas, but also areas on the high seas. This focus, unique to Oceana, allows us to collect first-hand information to increase the protection of threatened species before their habitats are destroyed.”