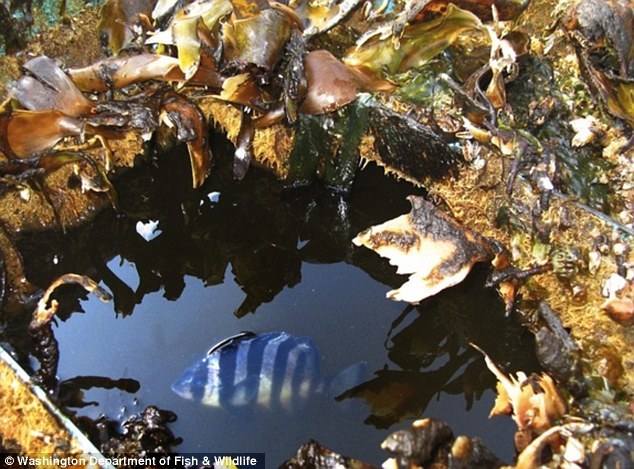 Set adrift on memory bliss? This beakfish is a true survivor!

Five fish (along with numerous invertebrates) were found on the grounded 18×3 feet Japanese boat, but the only fish to survive the two year, cross-continent journey was a 5″ tropical striped beakfish (Oplegnathus fasciatus, pictured right).  The lone surviving castaway was found riding inside a 20-30 gallon holding tank.  This seafarer somehow managed to survive in this floating aquarium without filtration, temperature regulation, external food source, etc. for several years.

Washington Department of Fish and Wildlife officials say this is the first time a vertebrae set adrift on debris by the Japanese tsunami has been found alive.   The beakfish is currently at the Seaside Aquarium in Oregon, no doubt in much more comfortable quarters, and we’re guessing he’s already a mini-celebrity.

Officials have yet to positively identify the boat as tsunami debris but its registration shows the boat originated from a region devastated by the waves.

While this is a very compelling story of survival and resilience, this beakfish also shows how it’s possible for non-native species to cross great divides and potentially threaten foreign ecosystems.