It’s a fine Tuesday for fans of rare angelfishes, as the video above, shared by De Jong Marinelife, shows off the latest Centropyge debelius to turn up, seemingly the first in more than a year. 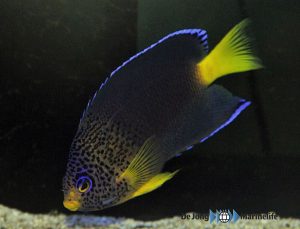 Known commonly as the Blue Mauritius Angelfish, this species is recorded only from Mauritius, Réunion and the Seychelles, and is said to belong to the C. multicolor species group, which includes several other rare taxa endemic to remote oceanic islands: C. hotumatua (Easter Island), C. joculator (Cocos-Keeling & Christmas Islands) and C. nahackyi (Johnston Atoll). The known range of C. debelius correlates perfectly with a distinctive ecoregion present in the Southwest Indian Ocean which serves as a hotspot for speciation; other rarely seen species from here include Cirrhilabrus sanguineus, Paracheilinus piscilineatus and the enigmatic Apolemichthys guezei, as well as the very recently described wrasse Halichoeres gurrobyi. 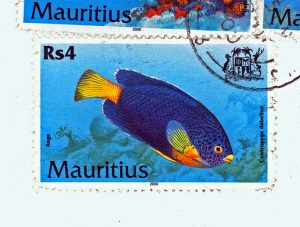 The Blue Mauritius Angelfish favors fairly deep habitats (50-100 meters) along the outer reef slopes of these oceanic islands, darting in and out of the many caves and crevices that constitute its home. Like others in its genus, this fish is presumed to feed mostly on algae, detritus and perhaps a bit of sponge, and aquarists who have kept this species report it to be just as hardy as any other dwarf angelfish. Given its remote location and the many logistical difficulties of reaching this elusive and uncommon fish in its natural habitat, it should come as no surprise that it is so rarely encountered, but here’s hoping a few more can be collected for captive breeding.