A closer look at the Devils Hole Pupfish, Cyprinodon diabolis 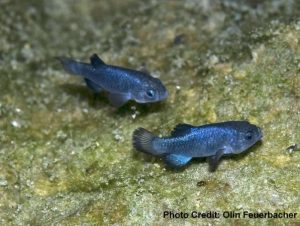 We recently posted an article describing how unwelcome trespassers recently disrupted the environment and possibly killed a Devil’s Hole Pupfish (Cyprinodon diabolis), one of the rarest fish species on the planet. After hearing of this incident, we thought it would be interesting to learn more about how this fish can survive in such an inhospitable desert environment such as “Death Valley”.
Described as the worlds rarest fish, less than 200 of these fish have been known to exist at any time since 2005.  Despite conservation efforts, the population has been on the decline since the 1990s and fewer than 150 individuals survive today.  The reason for the decline is unknown and attempts to establish a population outside of Devil’s Hole have been futile to date.  Some claim that their demise is due to climate change but that’s an easy label to slap on about anything these days. MORE