For an avid fish collector with a young child and no boat, life can sometimes be frustrating. I am limited to a small number of access points like public beaches and fishing piers, and once I’m there, getting to where the real treasures are can be problematic. Apparently, according to the latest parenting books, it’s not okay to leave your kid on the beach while you go SCUBA diving.  So, how do I survive these hardships? Through necessity (and years of experience), I’ve learned that with good timing and sharp eyes, the most unlikely of waterfront visits can become successful collecting excursions. 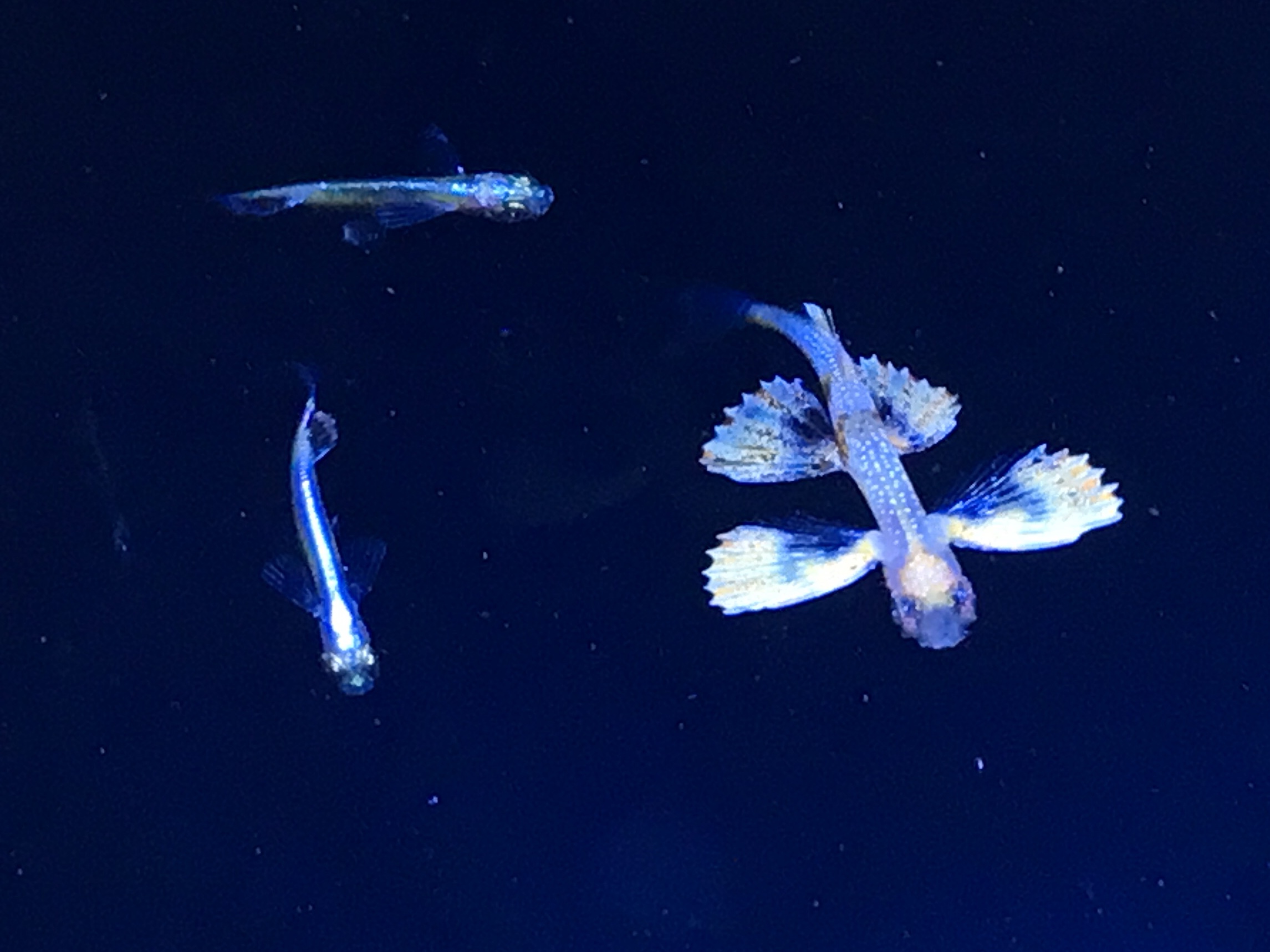 These post-larval flying fish were scooped off the surface in Bogue Inlet, NC. They would never survive in a home aquarium, but it was a thrill to see them up close.

It’s hard to beat the access afforded by SCUBA gear. Fortunately however, a common feature of the early life history of marine fishes makes them accessible to anyone who’s paying attention. At the end of their larval period, many  species spend days or weeks drifting at the surface before encountering and settling into their respective demersal habitats. This is why I never travel without a dip net and bucket. And on family beach days, I’m never in the water without a piece of Tupperware or some other small container. This last rule was established back in my high school days. I was at the beach on senior cut day with some very cool friends when I spotted something interesting darting around in the sea foam between waves. Moments later, standing in waist-deep water, holding a post-larval priacanthid cupped in my hands, I found myself screaming up the beach for my new girlfriend to grab a used soda cup out of a garbage can. Eventually she obliged and I happily carried home my very first short bigeye, but for some reason, that relationship didn’t work out. 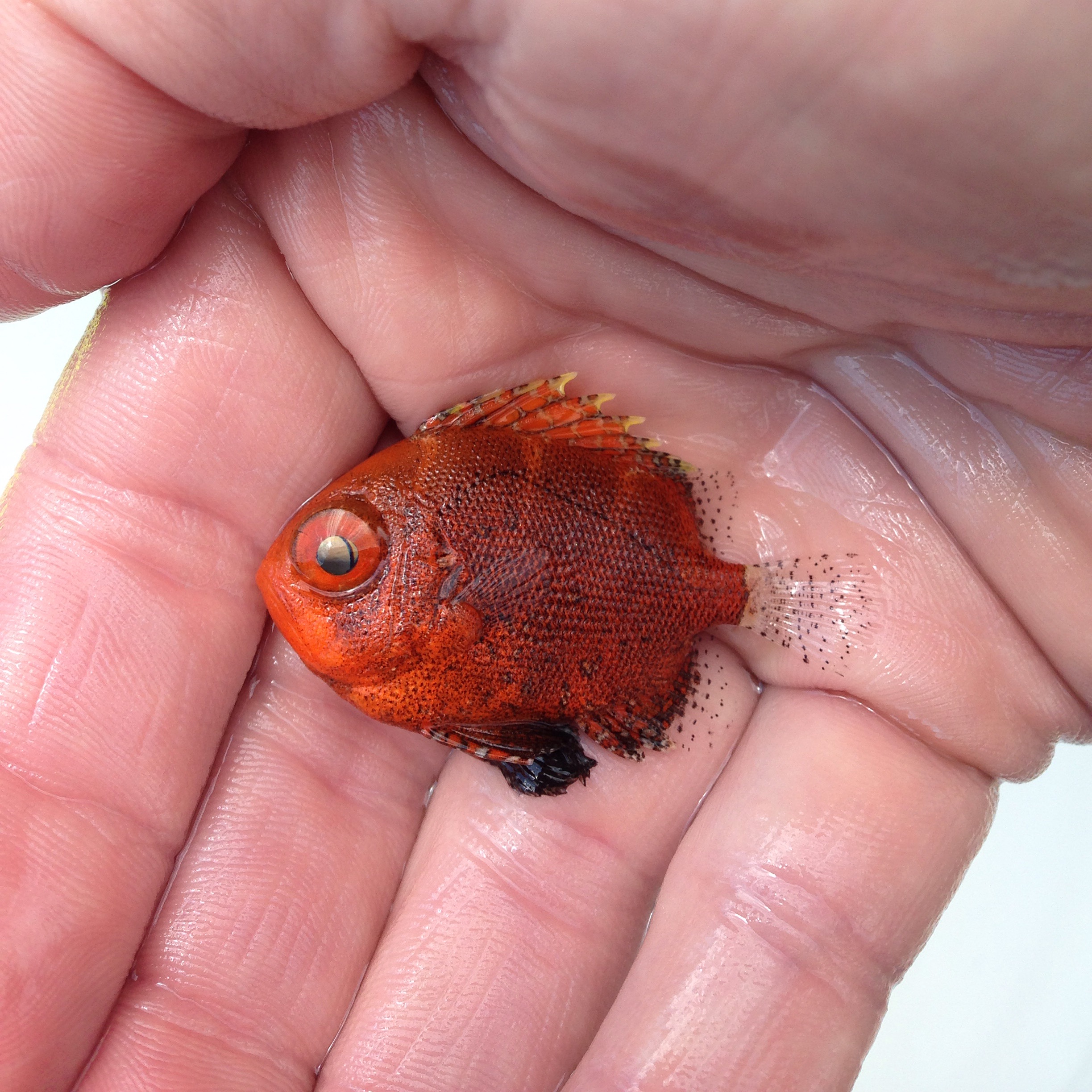 A lucky find! As adults, short bigeyes (Pristigenys alta) live in rocky caves in deep water but it’s not uncommon to find small juveniles adrift on the surface. 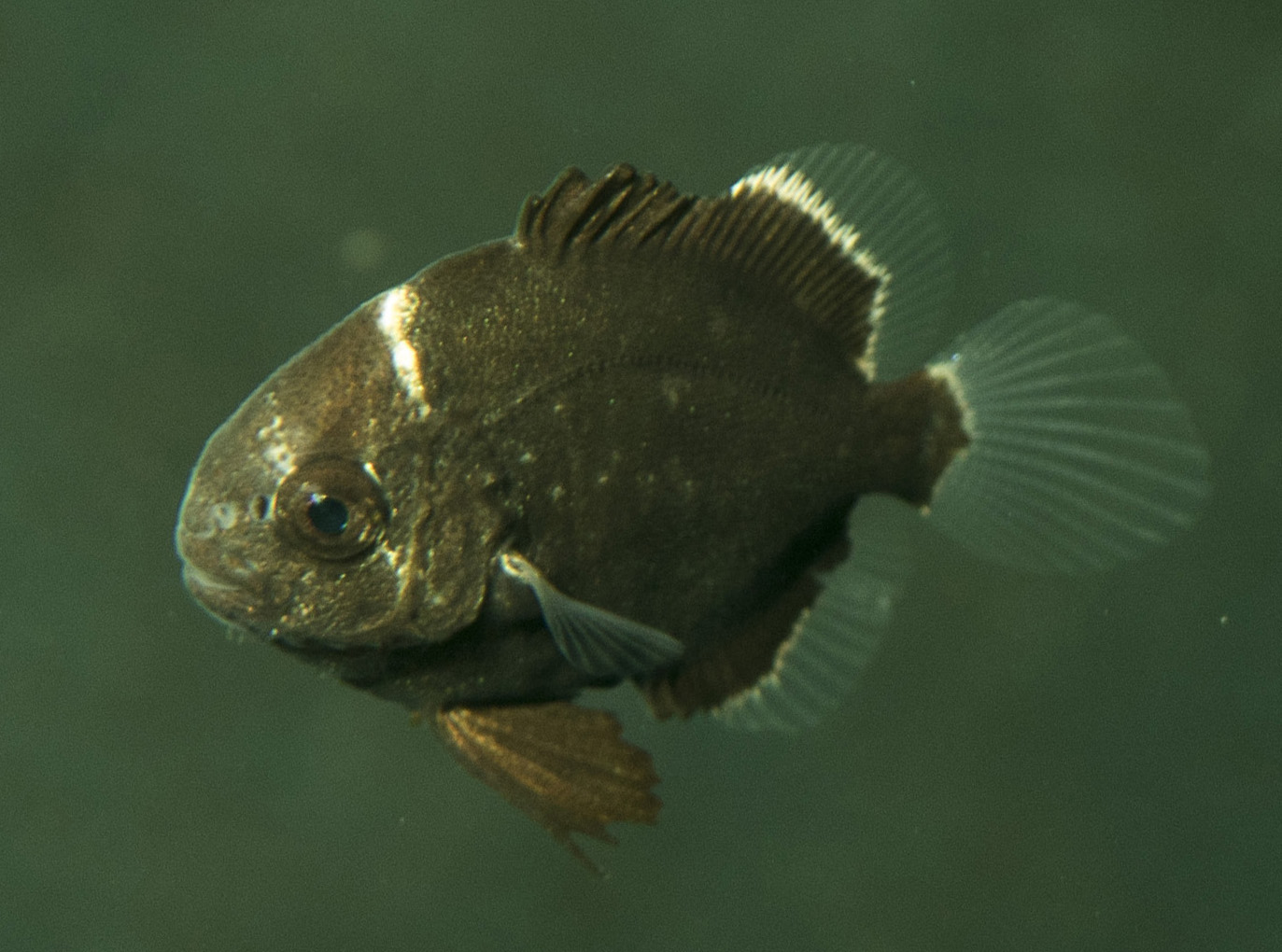 In the southeastern US, baby spadefish (Chaetodipterus faber) are often found drifting along the surface during the summer, looking like tiny pieces of leaf litter.

To date, many of my best captures have been made by skimming tiny fishes off the surface. It’s not uncommon to find a post larval fish swimming along trying not to be attacked from above or below, but as any dipnetter, or albatross, or mahi-mahi knows, a piece of flotsam will increase your chances of finding something good. Any drifting leaf, twig, or, (as much as I hate to say it) piece of trash can become a refuge for a tiny fish. Of course, there is no better or more natural floating refuge than a piece of Sargassum weed. The natural habitat for pelagic Sargassum is the nutrient-poor waters of tropical oceans, usually far from shore, but it is often pushed far outside its ideal range and into beaches by winds and ocean currents. If you’re lucky enough to be on the water when a patch of weed shows up, you will likely be treated to some exciting finds. 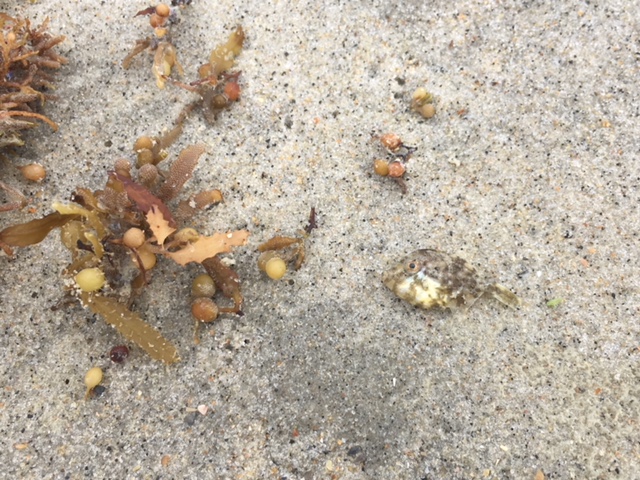 Some drifters are not so lucky. This Stephanolepis hispidus was washed ashore during a tropical storm.

Many of the fishes that frequent the flotsam, like the iconic sargassum fish, are voracious predators and shouldn’t be placed in a community tank. Others, like amberjacks and mahi-mahi grow very large and are regulated in some states. But even species that may be appropriate for the home aquarium can be challenging when they are caught at such a small size, especially when it comes to feeding. Being an aquaculturist, I typically have a variety of foods on-hand to help in the weaning process. If you don’t have access to live plankton cultures, there are several frozen copepod products on the market that can ease the transition to prepared foods. One of my best tricks for getting these new small-mouthed arrivals eating is to take a chunk of quality frozen food like LRS Fish Frenzy and shred it with a microplane grater. Finicky eaters like small butterflies and angels find this irresistible. 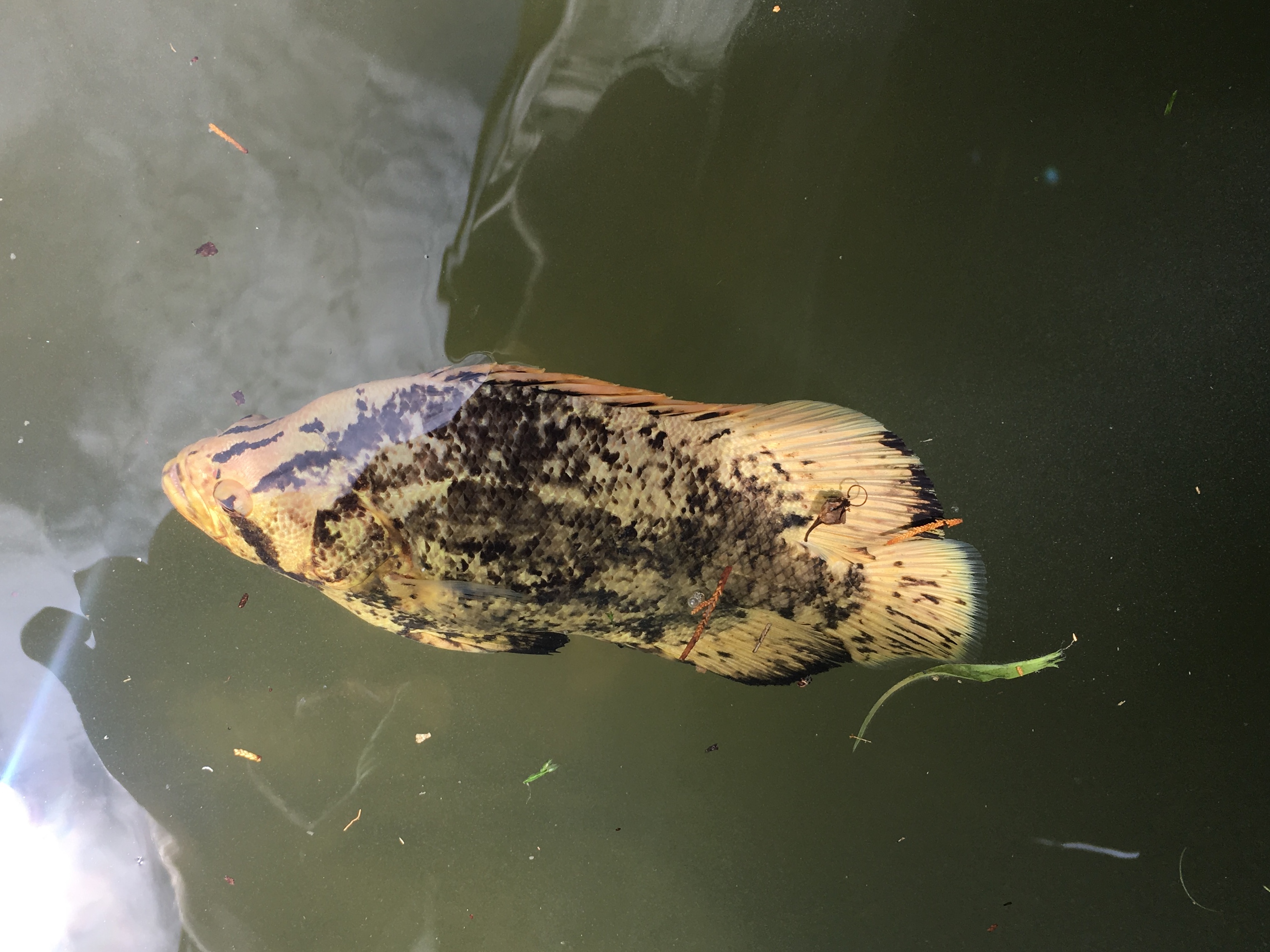 Tripletails (Lobotes surinamensis) continue to drift at the surface, mimicking leaves and other debris, for most of their lives.

Skimming the surface for aquarium fishes can be fun and rewarding, but as with any collecting activities, you need to be aware of local laws governing the capture of marine fish species. And of course, make sure you practice a strict quarantine regime to avoid preventable disasters in your tanks. 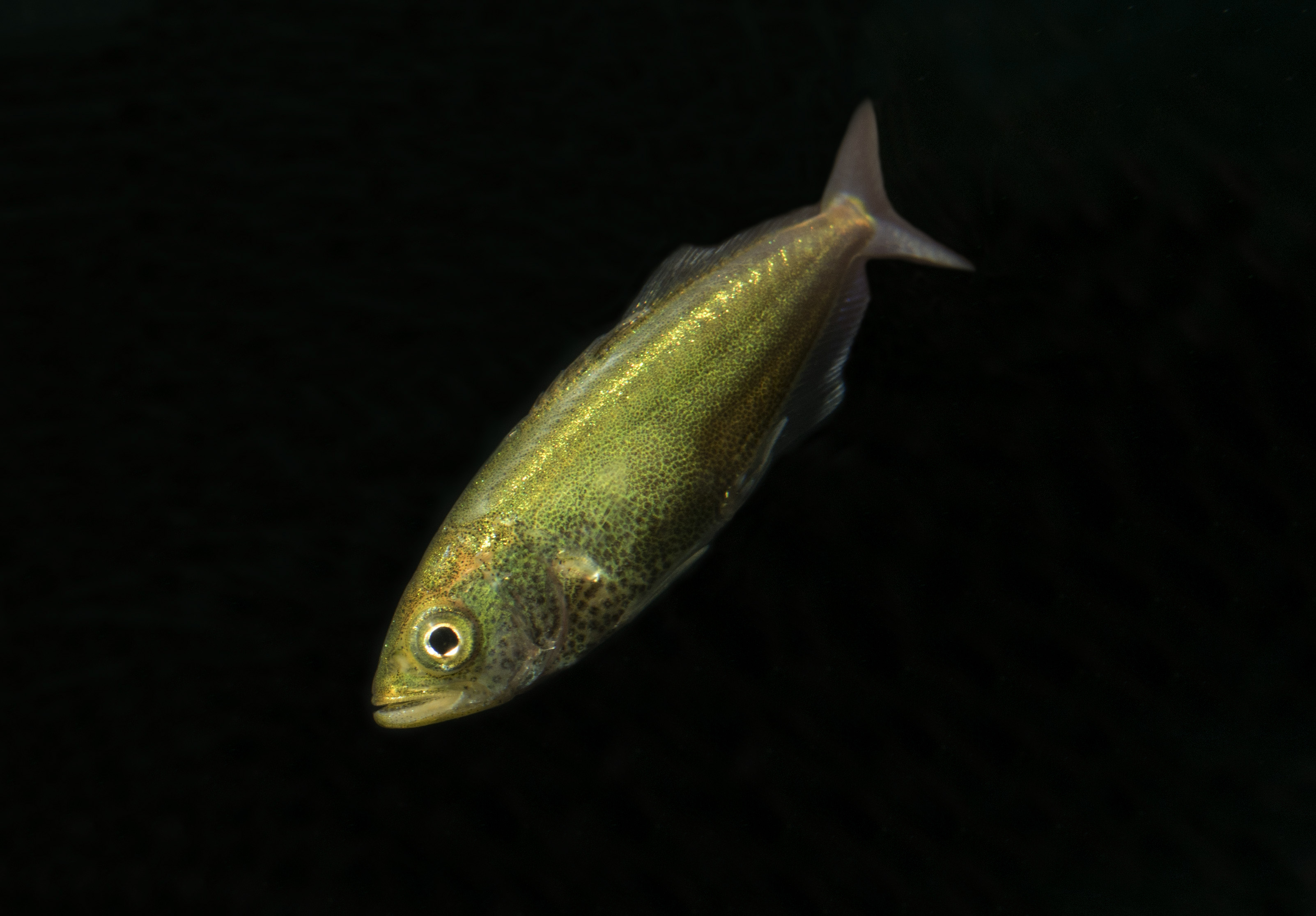 When you’re collecting post-larval fish, you don’t always know what you’re bringing home. It took me several days to identify this as a juvenile leatherjacket, Oligoplites saurus. 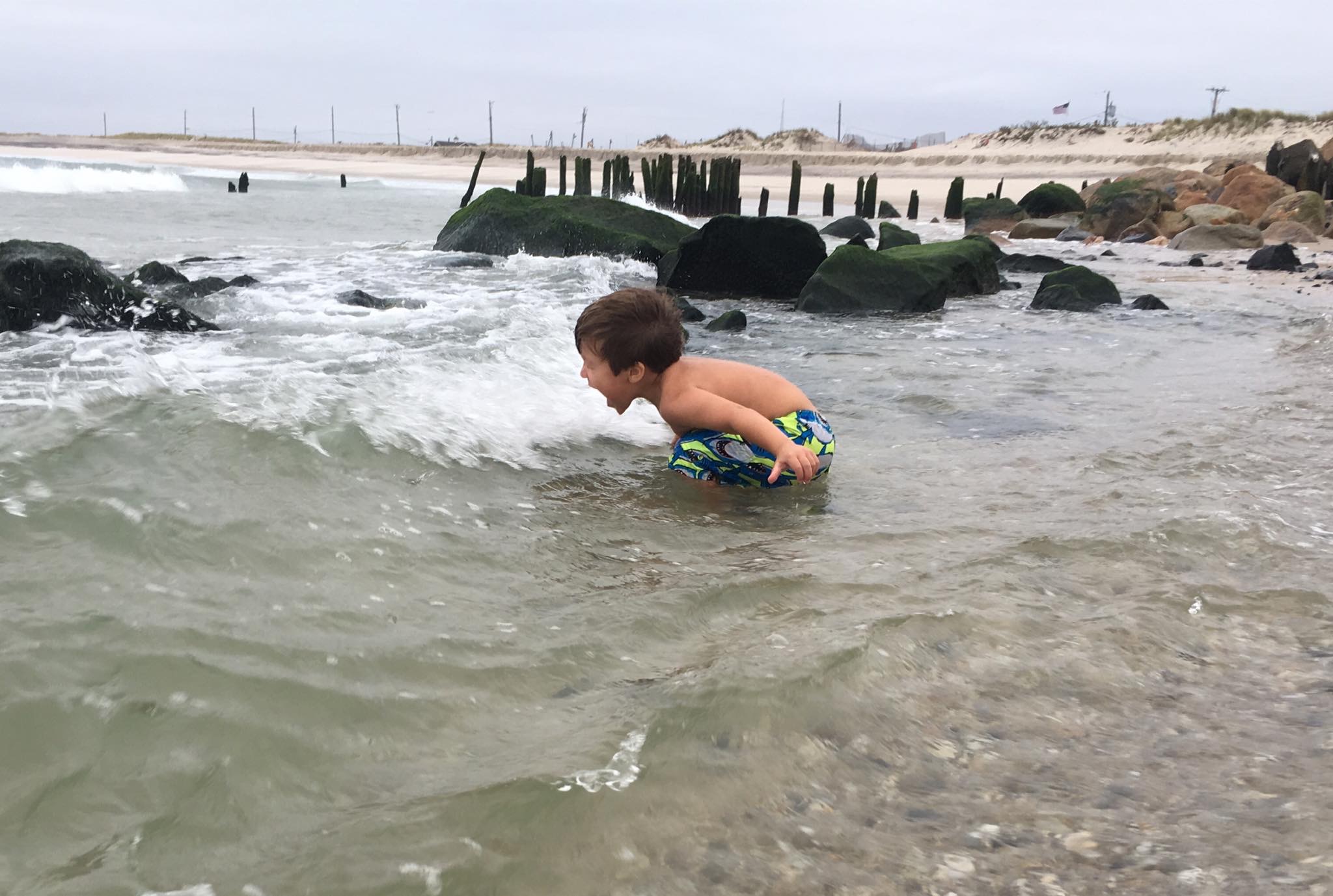 It’s not easy training a six-year-old to catch tiny fishes off the surface of the ocean, but the payoff is that every family beach day doubles as a collecting excursion.