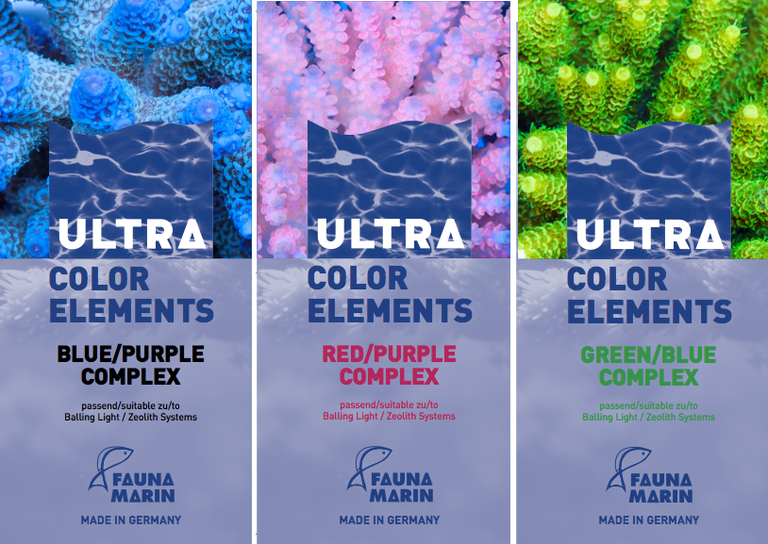 Color Elements is a new product from Fauna Marin.


Color Elements is a new product line from Fauna Marin (an Advanced Aquarist sponsor).  According to Fauna Marin, Coral Elements are a “novel mix of growth and color enhancing trace elements, based on a unique and experimentally confirmed recipe, which perfectly adopts to modern artifical seasalt mixes. Developed by leading scientists, this state- of-the-art element mix aligns the micronutrient consumption of tropical corals with the environmental light conditions generated by LED lighting systems. It allows for stable conditions in the micronutrient budget in coral reef aquaria, and thereby significantly increases coral growth rates and coral coloration. Due to the special formulation of the elements this mix does not lead to the accumulation of excess toxic trace metals in the aquarium and effectively prevents the growth of unwanted algae.”

Fauna Marin currently has three Color Elements that they are offering:

Each of these products are reported to increase calcification rates, coral tissue growth, coloration in SPS and LPS corals even under lower lighting conditions, improve their fluorescence, and help harden them against radiation stress.  They can be dosed either by hand or using a 3-way doser and are compatible with the Balling Light System, Zeolith System, or pellet-based systems.

An example of a coral grown with Color Elements.

Fauna Marin has a photo gallery of corals reportedly grown using the new Color Elements and you can see them on their Facebook page.

Color Elements will replace Fauna Marin’s PowerTrace Elements as they cost less and are more effective.

Color Elements are available in both 250mL and 500mL bottles and retail in Europe for approximately $18 and $25 respectively. Fauna Marin states that the products will show up in the United States within the next couple months.