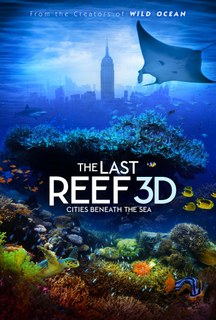 Getting family and friends scuba-certified and taking them out on a grand diving expedition would make for a truly memorable educational adventure, but who has the time or money?  The Last Reef 3D: Cities Beneath the Sea may be the next best thing.  This 40 minute IMAX 3D underwater film was shot by cinematographer D.J. Roller using the latest 3D equipment inspired by James Cameron’s 3D Titanic documentary, Ghost of the Abyss (whom Roller worked alongside for this production).  We aren’t talking about a digitally manipulated, post-process 3D movie (which most 3D movies are) but rather a film shot in true 3D for IMAX.  The cinematography is guaranteed to make a lasting impression on young and old alike.

Despite the ominous title, The Last Reef 3D shares an inspirational message intended to cultivate audiences’ appreciation for sea life by paralleling “foreign” underwater ecosystems to modern cities.  The movie instills a sense of urgency to protect coral reefs, but the documentary is careful to deliver their message in a positive, motivational tone.  The movie opens with footage of a nuclear blast at Marshall Islands’ Bikini Atoll (site of US’ nuclear weapons testing in the 1940 and 50s) followed by scenes of the reefs of Marshall Islands today.  The message (which carries through the film):  Coral reefs are beautiful, resilient, and can thrive … “if we let them,” as narrated by Jamie Lee.

From the Academy-Award nominated creators of the Broadway show STOMP and the award-winning film Wild Ocean, The Last Reef is an uplifting, inspirational large-format and 3D cinema experience capturing one of nature’s more vibrant and diverse wonderlands. Exotic coral reefs, vibrant sea walls in the sub-arctic pulsating with anemones and crustaceans: these biodiversity hot spots are as vital to our lives as the rainforests. Shot on location in Palau, Vancouver Island, French Polynesia, Mexico, and The Bahamas using groundbreaking 3D cinematography, The Last Reef takes us on a global journey to explore the connection of our cities on land with the ocean’s complex, parallel world of the coral reefs beneath the sea.

Here is the official HD trailer of The Last Reef 3D: Cities Beneath the Sea.  Imagine these footage but on a giant IMAX screen in true 3D.  Wow!

As of February 3, 2012, The Last Reef 3D is actually already in theaters but with extremely limited engagements throughout the United Stats thus far.  Advanced Aquarist hopes to see this film on more screens in the coming months.  Contact your local aquariums, zoos, and scientific institutions (e.g. Smithsonian) with IMAX theaters.  For those in Tennessee, The Last Reef 3D will open at the Tennessee Aquarium on March 2.