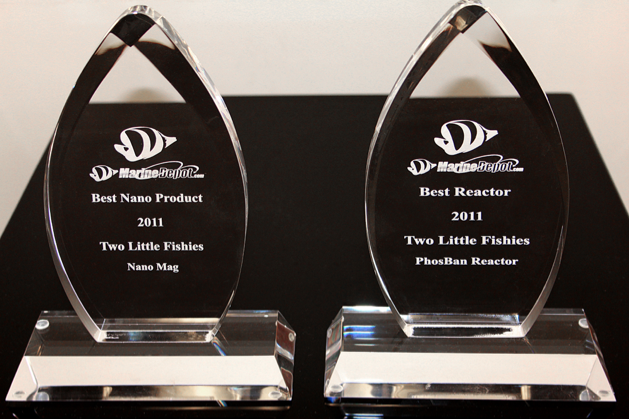 Marine Depot (MD) considered the largest supplier of marine and reef aquarium supplies in the world announced at Reef-A-Palooza the names of their Best of 2011 award. This award honors the products that are best received by the marine aquarium industry. Marine Depot carries more than 170 brands from around the globe and selected 12 categories and 10 winners for their coveted award.

The selection process preformed by MD involves not only selecting manufactures that go above and beyond what is expected of them with product reliability and customer support, but they also gather important internal data to support their choices. The data selected, researched, and taken into consideration by MD for their awards are sales volume, internet searches, website searches and customers rankings.

For 2011 Two Little Fishies (TLF) walked away with two of these cool looking acrylic flat bottom teardrop awards. One award titled Best Reactor was awarded to TLF for their ever popular and reliable PhosBan Reactor. The reactor is designed to direct water through the media contained in the reactor. The other award titled Best Nano Product was presented to TLF for their NanoMag. The NanoMag was design for ease of use when cleaning the algae on the glass of Nano tanks.

TLF was founded in 1991 to promote the reef aquarium hobby with its introductory video and books about reef aquariums. Since then it has grown to become a manufacturer and importer of the highest quality products for aquariums and is considered one of the staples in the reef hobby.