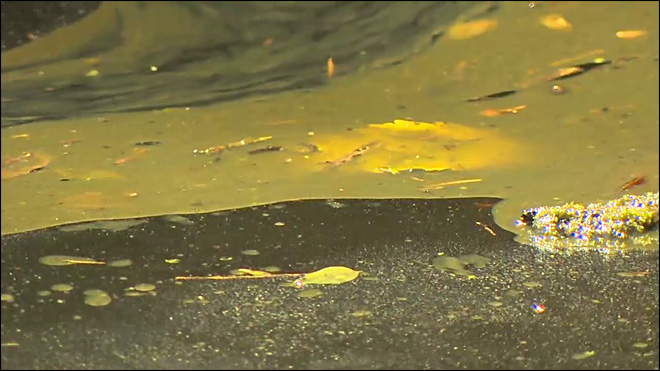 With a very warm summer and a mild winter wild fish deaths in Washington State have been higher than normal. The ongoing forest fires in the state maybe magnifying the problem . This time, however, the fish deaths are from a very unlikely cause: cooking oil. Hundreds if not thousands of fish in Lewis Creek, Washington have been found dead. Many of the fish were identified as fingerling salmon and larger salmon. Officials have attributed the fish deaths due to vegetable oil and shortening, from a nearby warehouse, contaminating the waterways through runoff into Olequa Creek. It is estimated that approximately a thousand gallons of oil poured into the creek. The grocery warehouse containing the vegetable oil and shortening caught fire Tuesday morning. The oil was transported to the creek by the gallons of water firefighters used to put out the fire. The oil runoff, according to Ecology spokesman Chase Gallagher, caused ‘100 percent fish kill for 5 miles’. The cause of the warehouse fire is unknown. Firefighters attempted to control the contamination by placing sandbags around the storm drains, but there was still too much oil which got to the waterways. Cowlitz Clean Sweep has been hired by officials to clean up the oil spill. The effect of this oil on waterways is devastating for the fish. The oil makes it difficult for the fish to breathe and leads to reduced oxygen in the waterways. Officials expect the clean up will last for days. MORE