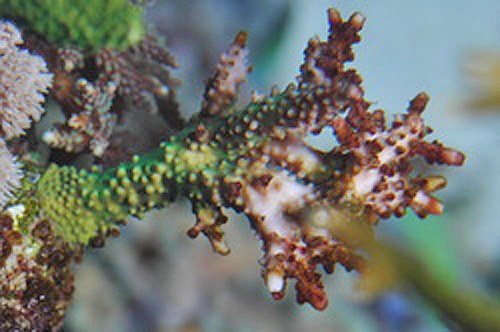 
The new ARC research (see below) also poses an interesting hypothesis for aquarium coral husbandry.   Could the use of calcium reactors with CO2 and higher temperatures in aquariums increase damage to stony corals if boring algae is present?

Learn more about Green Boring Algae at Aquarium Coral Diseases, a terrific science-based website dedicated to the identification and potential cures for the pathogens and predators that attack corals in public and home aquariums.

A world-first scientific study has found that, weakened by microscopic borers, the world’s coral reefs will erode more rapidly as the oceans warm and acidify.

This phenomenon, combined with a slower growth of coral reefs due to ocean acidification, may make reefs more vulnerable to storms and cyclones, says Ms Catalina Reyes of the ARC Centre of Excellence for Coral Reef Studies (CoECRS) and The University of Queensland (UQ).

“So fish, turtles, sharks, lobsters and other reef organisms may lose their homes, threatening reef biodiversity and the livelihoods of tens of millions of people,” Ms Reyes says.

Ms Reyes explains that corals use calcium carbonate, or limestone, to build the reef structure. As they accumulate carbonate and extend their skeleton, the old, dead parts are eroded by waves, currents, fishes, sponges and by tiny plants that live inside the reef.

“There is a fine balance between accumulating and losing carbonate, and healthy reefs are the ones that gain more than they lose,” Ms Reyes says. “Anything that disrupts this balance puts coral reefs in danger.”

Coral reefs are already threatened by ocean acidification, caused by human carbon emissions dissolving into the oceans, as this process reduces the amount of carbonate in the seawater, causing the corals to build the reef at a slower pace, says Associate Professor Sophie Dove of CoECRS and UQ.

In this latest study, CoECRS researchers found that the lack of carbonate to build coral reefs isn’t the only challenge that these ecosystems face.

“Our research shows that when seawater is both acidic and warm – which is predicted to happen under future climate scenarios – coral reefs could be made more fragile by microborers, such as algae, blue-green algae and fungi that inhabit reefs and bore tiny holes in it that undermine the strength of the coral skeleton.”

To explore how the combination of a warm and acidic ocean affects the activity of microborers, the researchers exposed different types of coral skeletons in tanks containing seawater which simulated two future climate scenarios.

“The first scenario was ‘business as usual’ where nothing is done by humanity to decrease CO2 emissions,” says Ms Reyes. “In this case, the rate of erosion by the microborers of the coral skeletons almost doubled compared to the present day.”

In the second scenario, in which CO2 was above current levels, but less than the ‘business as usual’ scenario, the rate of erosion was 35 per cent, Ms Reyes says.

“So if we look into the future, not only do corals have less material with which to build their reefs, but the old, dead parts that support them are eroded much faster,” says Dr Dove. “If we think of the reef as a scaffold, it’s now being taken apart faster than it can re-build, which means that it’s at a higher risk of collapsing.”

“We found that microborers were more abundant under both predicted scenarios, so it is possible that acidic and warm seawater will stimulate their growth, leading to coral skeletons dissolving faster,” Ms Reyes says.

Ms Reyes says that the most abundant type of algae identified in the study is also the world’s most common photosynthetic microborer, capturing sunlight to fuel its activities. It currently inhabits 85 per cent of the world’s corals and has an extraordinary ability to cope with low light conditions, allowing it to penetrate deep into coral skeletons.

“Even if there are ‘super corals’ that do well in an acidic ocean, this study shows that we mustn’t underestimate how much climate change can affect other important reef processes,” Dr Dove cautions.