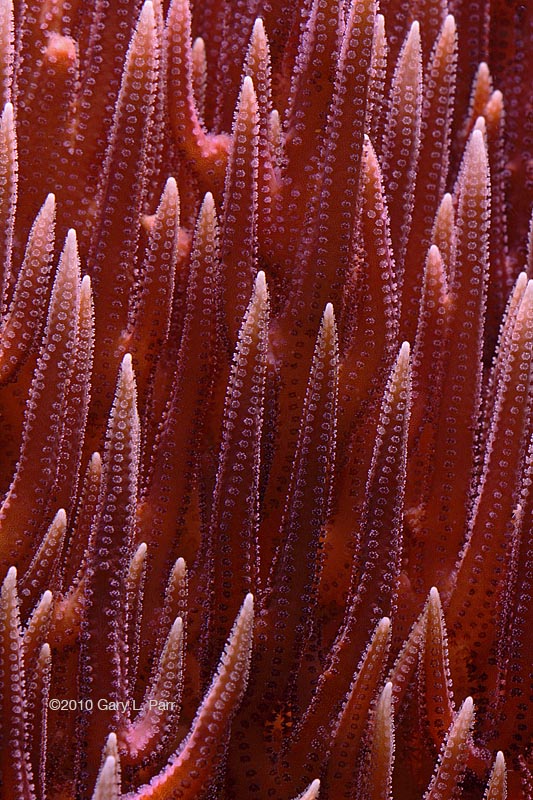 Photographically, corals aren’t really interesting to me until I get close. As I move in, there is a point at which I enter a kind of alien world and start to see things I don’t normally see. This photo of Seriatopora is an example of that alien-world effect.
When I approached this colony, owned by Paul Law of Paul’s Corals, Mukwanago, WI, it wasn’t the colony that caught my eye. It was the repeating pattern of tall, slender “trees” that make an endless alien forest in which you could become entrapped forever. Once you enter the forest, there is that inner glow that piques your curiosity and sucks you in even deeper as you seek its source.
The challenge in capturing this image was to decide which portion of the colony to photograph, i.e., where does the image start and where does it end? I tried to find a section that offered a progression of spikes from front to back. The frustration is that I couldn’t get lower and use an upward angle because the coral would distort in the image.
The other challenge with this coral in particular, and SPS colonies in general, is that you’re almost always dealing with very strong metal-halide lighting that causes a wide exposure range from top to bottom. To keep from over-exposing the tops, you have to underexpose the overall image and then adjust the shadow areas in post processing. The pure-white growth tips are always going to be white and blow out at the very tip, but you have to minimize that so the image doesn’t visually become a bunch of white points.
Whenever I look at this image, I enjoy the polyps, colors, and the repeating pattern of vertical lines. But the little thing that makes this image work for me is that inner glow at the base of the colony that looks as if there is a camp fire lighting up the floor of the forest.
Technical details: 1/12 sec. @ f/22, ISO 400, Canon 7D, Sigma EX 180 macro, tripod, remote release, mirror lockup.–Gary L. Parr, www.gparr.com, www.reefthreads.com