A dozen years ago, I wrote about my first successful full soft tissue fusion in two strains of Acanthastrea echinata. Since that time many more have taken up the challenge (or stumbled upon it by accident.) It was exciting to be the first to kick of this wave of grafting and fusing, and it has been great to see the practice mature in our hobby. While I initially had push back from that article, the doubters have been silenced by science and the sheer number of successful grafting and fusion of many species across genera. World Wide Corals has emerged as another industry leader in this area, and with their collaborations with Jason Fox and his amazing strains, they have found or created fusions of Chalices, Montipora, Pocillopora, and Cyphastrea. Jaime Craggs of Horniman Museum recently made waves with his fused Acropora from larvae spawned and settled at his facility. This fusion of larvae is actually the most common form of fusion and extremely widespread in the ocean, with recent studies showing that nearly all Acropora palmata colonies are fusions from several larvae that matured into one chimeric colony.

We recently opened the Credabel Coral Gallery, an art gallery and small coral lab, and now I am motivated to  create even more new fusions; coral “art” pieces to display to the public. I decided to retry grafting Acanathstrea echinata, using some strains I’ve been growing. I chose three strains and had some interesting, beautiful results. 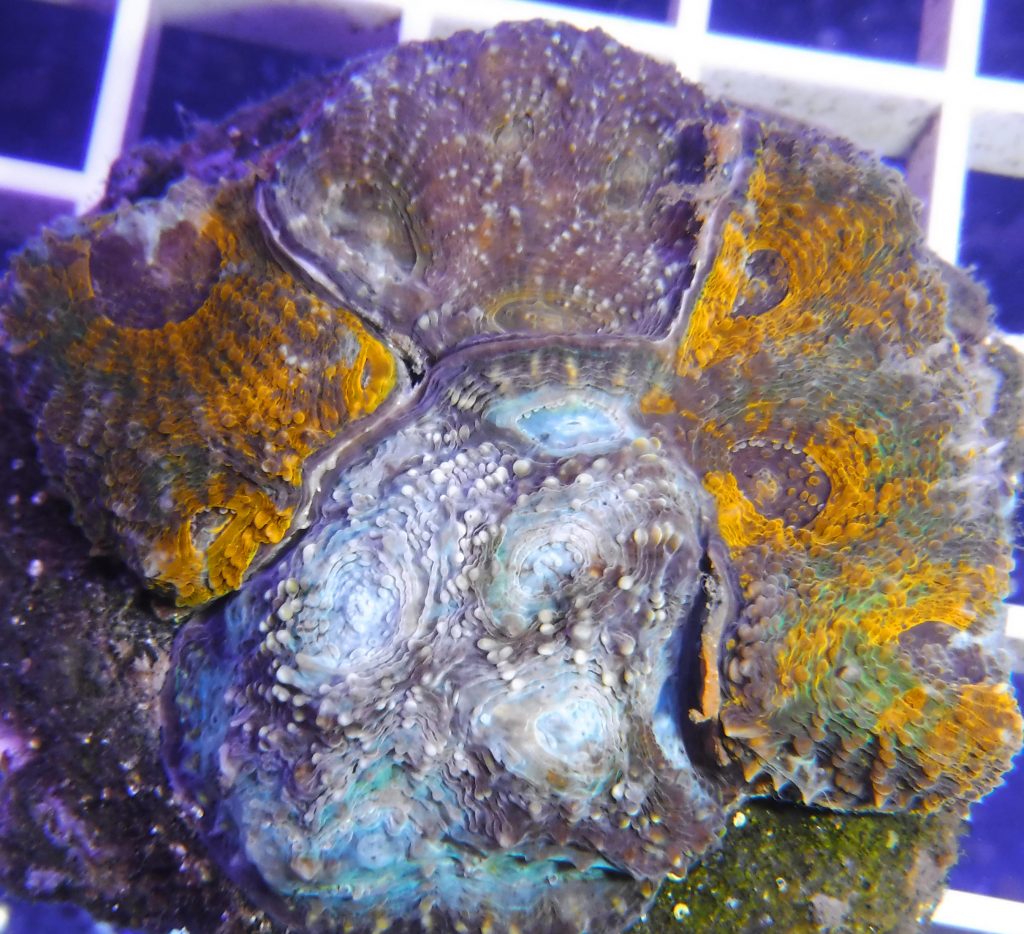 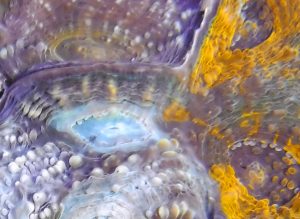 The photo above shows a graft between three strains, Starry night (top middle), DeerHunter (bottom middle), and Pumpkin Patch on each side. This a great piece to show how even though the ability to fuse exists between the DeerHunter and Pumpkin Patch, it doesn’t always happen, as evidenced on the left, where there is no fusion at all between the two. So far in all my grafts Starry Night has not fused with either PP or DH. What I expect to happen over the months is for the PP on the left to eventually begin fusing with the DH, most likely starting near the tissue that is already fused towards the top of the DH.

This has happened before, most notably in one of my first fusions in 2005. Below is a series of pictures from my first fusion showing how the fusion developed overtime, including color changes, mostly of the Orange Crush Acan with green, cyan, and brown taking over. 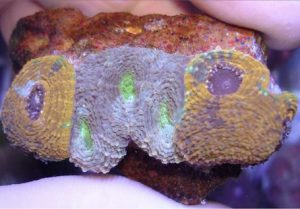 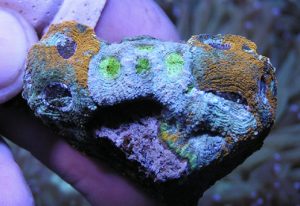 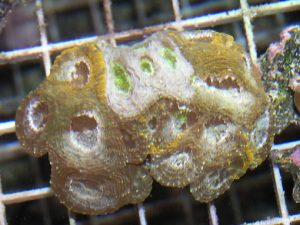 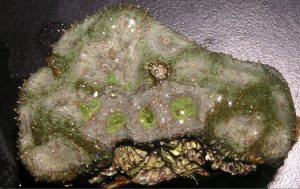 What is most striking in the last photo of my 2005 graft was the complete color change of the orange crush. You can see the color gradually changing in each picture over time. This influence of color between grafts is a well-known phenomena, and is seen a majority of the time in new grafts that have successfully fused. We usually see this color change at the point that eventually fuses, though we also see this color change in rejected grafts. Also, depending on the graft pairing, color influence can be quite extreme. 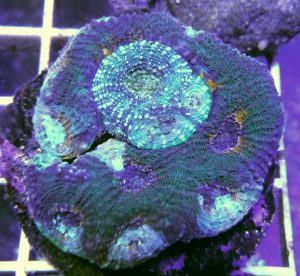 The image to the left is a graft of Starry Night with a spiral graft wrapping of Pumpkin Patch. Notice the almost-absent orange, and powder blue patches on the polyps at the edge. Also note the bright blue coloration of the Starry Night. 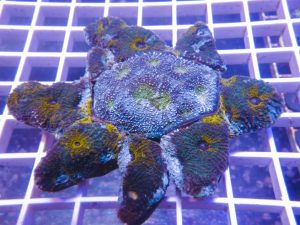 This a graft of the same two coral, still no long-term fusion, but the same color influence. The light blue streaks developed, and these initially started at the point of contact on each graft boundary of the outer rays of Pumpkin Patch. The Pumpkin Patch pieces on this graft are holding onto some orange much better than other grafts, this is due to the large area of these graft pieces, which have 2 or 3 times the horizontal size of the other grafts that lost all orange in other SNxPP grafts. 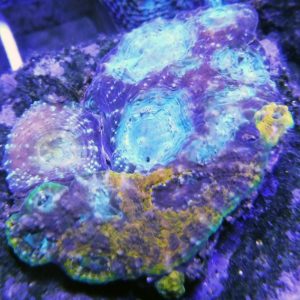 The photo at left and that at the top of the post show a triple graft/fusion of the same 3 varieties. DeerHunter promotes the orange in Pumpkin Patch, reduces expression of forest green pigments, but slightly increases the neon green ribbons, it also seems to override Starry Night from driving out the orange in Pumpkin Patch.  DeerHunter in the grafts with Starry Night (polyp at left) will make the Starry Night drab and wash out most of the nice blues. Deerhunter will loose all swaths of green and the slight strips of orange/red it usually has when grafted with Pumpkin Patch, and will cause DeerHunter to express almost exclusively the powder blue polyp/purple-dark rim coloration. As we develop our methods in the hobby with grafting, and more strains are fused over time, more of this color change between varieties and species will become evident and allow for more purposeful color creations in grafts. 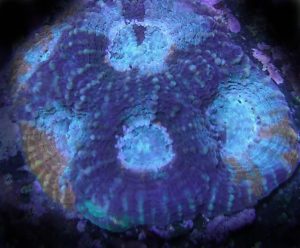 This color swapping, varietal influence of color and general grafting percentages in compatible strains was clearly evident after a round of studies and lab experiments in 2006-2007 we conducted at the Coral Aquaculture Lab at Science Technology Magnet High School in New London, CT. We were able to document and image fusion at a microscopic level, and confirm some observations from the first couple years of successful grafting and fusion. 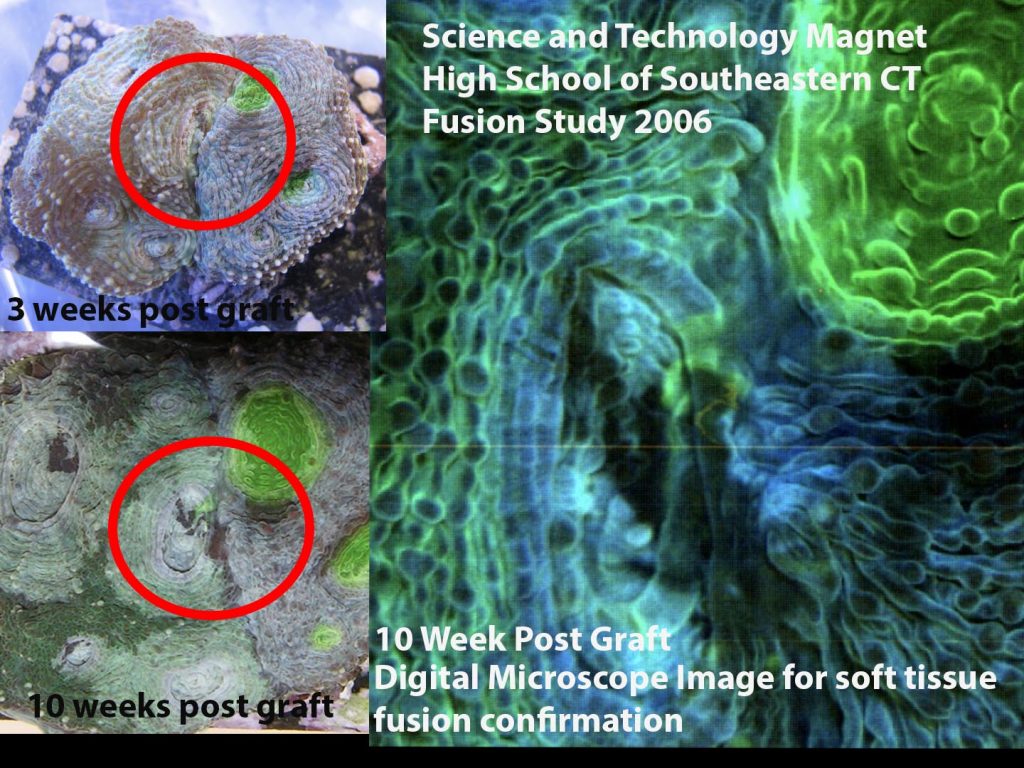 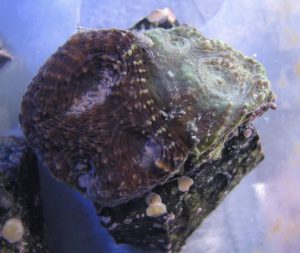 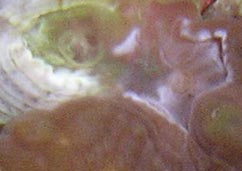 Close up of full fusion at 16 weeks.

We ran a couple of grafting studies with our students at the Science and Technology Magnet High School of Southeastern Connecticut in 2006 and 2007. We documented several cases of pre-fusion color swaps in 3 separate strains, and in half those cases we observed a week or two of “Kissing” mouths across grafts, usually one strain (sometimes both) reaching over and placing its mouth on their neighbor and actively consuming the service mucous. This may serve to regulate Thrastochytrid and other symbiont populations between the variants, aiding in immune system changes that allow for full fusion by quieting the self/non-self recognition reaction in the corals own cellular programming.

As I mentioned before, our successful fusions from grafts were only a percentage of grafts created (around 30% for the 2006 study), even though all 3 strains were compatible and fused successfully during the study. It took up to 6 months for a few grafts to fuse with most successful fusions initiating within 4-6 weeks (90%). It may be possible that other grafts would have fused given a year or two of observation. Another result that was striking was that 75% of successful fusions were polyp to polyp fusing. Almost all of my successful grafts that fused at that point, did so where I joined two freshly – cut polyps. For this study we decided to join half the grafts between a fresh cut half polyp of each strain to see if this might be the case. I believe this high success rate on a biological level is related to the “kissing” polyp tasting we’ve seen before with other fusions. Placing the healing polyps in contact at the time of grafting served to speed up the exchange of symbionts, and gene expression and immune systems integration.

Vernacular and proper definition of terms is an ongoing debate in our industry, but I’m happy to report that the proper definition and uses of words like “Grafted” and “Fused” has been used correctly and consistently the last 5 years. Grafting is splicing of two different strains of coral (usually from the same species, currently no known genus level grafts have been documented, but may be biologically possible), gluing them together with soft tissue contact to promote eventual fusion (if successful). Fusion is when the soft tissue (the two cell thick layer of epithelial cells and mesoglea channels) of the two strains heal together with mesoglea and nutrients flowing between both grafts and no skeletal barrier between the soft tissue. This skeletal barrier becomes more evident over time as it builds up to separate the colonies’ soft tissue contact, often with both strains growing vertical at the skeletal boundary, as long as  one strain is not dominant over the other. 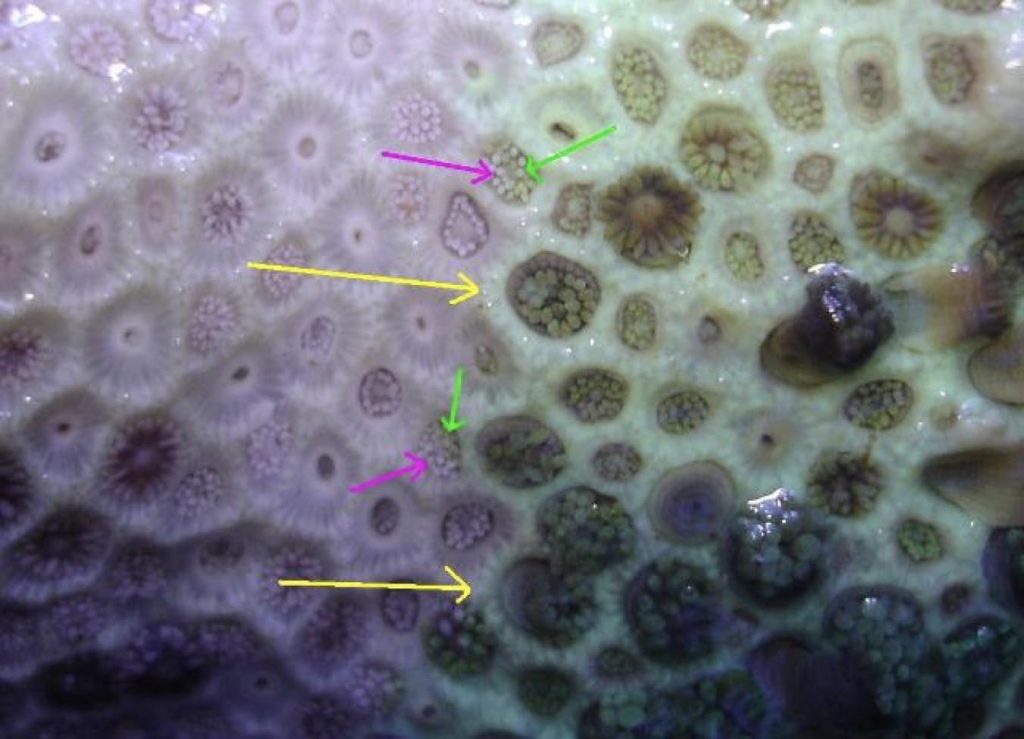 Grafting should not be confused with “Combos”,  gluing several types of zoas, acans, or sps to the same rock to create a mosaic product for sale. Generally these are not placed in soft tissue contact when glued, and the intention isn’t to create a single colony, though some hobbyists and pros have accidentally created fusions long term, as compatible colonies grow into each other. On the flip side an unsuccessful graft can lead to a simple “combo” with two separate colonies coexisting next to each other but not connected by soft tissue.

While full soft tissue fusion is the goal, the observation of hobbyists and professionals is that only a small percentage of species and strains will fuse, and those that do will only fuse a percentage of the time.  Dominance hierarchy of subspecies or strains within a species complex is the biggest cause of non-compatible grafts. While the quick and direct aggression in coral can lead to active stinging or digestion of the neighbor by messenterial filaments, low level aggression is harder to observe. Transitory fusion does happen from time to time, defined as short term integration of soft tissues, though this usually only lasts days. This will happen often in dominant/submissive strain grafts, with the submissive strain killing off its own cells at the boundary and laying down skeleton as a barrier.

It’s an exciting time in the hobby and it’s great to see things such as Grafting and Fusion taking root and expanding. Happy Fragging!