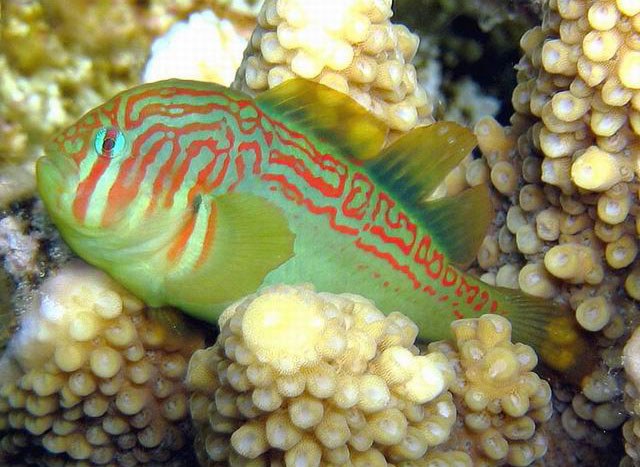 
Many species of goby are known to inhabit Acropora corals for protection from predators. While a lot is known about the benefits coral-inhabiting gobies receive from their host coral, very little is known about what, if any, benefit the host coral receives from their guest.

Researchers Dirnwoeber and Herler of the University of Vienna probe this question in their latest paper in Coral Reefs titled “Toxic coral gobies reduce the feeding rate of a corallivorous butterflyfish on Acropora corals.”

The two researchers setup aquarium experiments with these three fish and similar-sized heads of Acropora corals and used a video camera to document how many times the black-tailed butterflyfish fed on the different coral colonies.

They found the broad-barred goby was much more aggressive toward butterflyfish than Gobiodon sp. 3. The more aggressive behavior led to a reduction in butterflyfish predation on coral heads inhabited by the broad-barred goby by 62–98%.  Gobiodon sp. 3 was much less aggressive and it showed in the data as the predation of their inhabited Acropora heads were only reduced by 64–68%. Obviously the gobies were protecting the coral from predation.

The researchers also noted that the mucous covering Gobiodon species was not only toxic, which aided in their defense of the coral, but also acted as a parasite repellent, which also reduced incidence of parasites.

Dirnwoeber concludes: “this study demonstrates that Gobiodon spp. exhibit resource defence against coral-feeding butterflyfishes and also that coral colonies without resident Gobiodon suffer higher predation rates. Although the genus Gobiodon is probably a facultative corallivore, this study shows that by reducing predation on inhabited colonies by other fishes, these obligate coral-dwellers either compensate for their own fitness-decreasing impact on host colonies or live in a mutualistic association with them.”