Brilliant news from the Horniman Museum and Gardens in South London: scientists there there report a United Kingdom first – the successful in-vitro fertilisation of captive corals!  Gravid (already carrying eggs) corals were transplanted to the museum from Australia’s Great Barrier Reef in 2015, and in December, nine corals from two species – Acropora tenuis and Acropora millepora – released approximately 130,000 eggs in a spawning event.

Eight cross-fertilisations have now been carried out (each is of eggs and sperm from two corals of the same species) and thousands of coral ‘babies’ will be used by the Horniman and other institutions for further research into coral reproduction and early life stages. 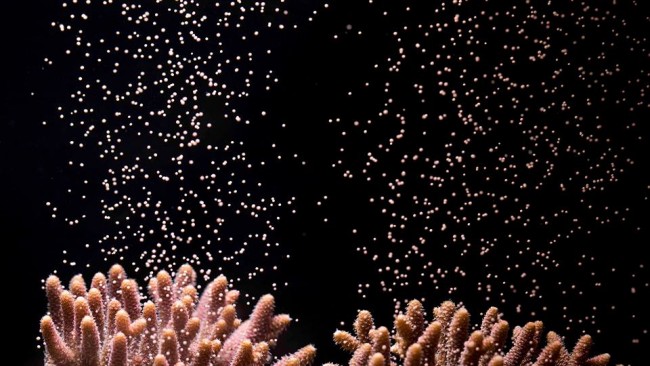 Jamie Craggs, Aquarium Curator at the Horniman Museum and Gardens, says: “We’ve seen captive corals spawn before at the Horniman, but this is the first time we’ve been able to successfully cross-fertilise them. This proves the techniques and equipment used in our lab are working, and is a key step forward for Project Coral.”

The Horniman’s Project Coral has partners around the world working together to predictably spawn corals in captivity, in order to investigate, counter and repair the impact of climate change on coral reef health and reproduction.

Dr Mary Hagedorn PhD, of the Smithsonian Conservation Biology Institute/Hawaii Institute of Marine Biology, says: “The work that Horniman scientists, led by Jamie Craggs, are doing on closing the life-cycle in coral is ground-breaking. Although some coral species have been bred in captivity before, never have they beenpurposefully induced to spawn while being maintained under captive conditions. So, this is a world-first for coral reproduction. Climate change is profoundly altering the viability and genetic diversity of coral reefs around the world. This amazing break-through in ex situ breeding of coral opens the door to an array of conservation measures to sustain coral in captivity allowing them to become living-banks for coral reefs.”

To find out more and support Project Coral visit www.horniman.ac.uk/coral.