Coral skeletons serve as both internal reflectors and UV protection 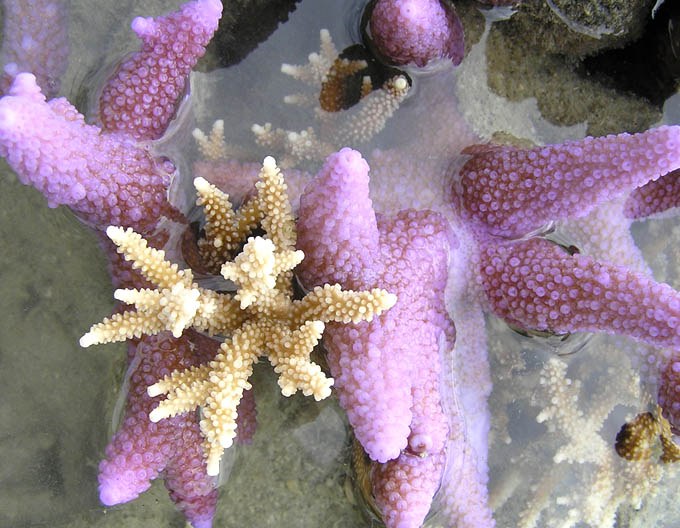 
Life Under the Sun: A Model of Efficiency

Have you ever wondered why well-lit corals (such as those found in shallow reefs) exhibit such bright, pastel, translucent colors?  Science may have an intriguing answer for us.

Australian scientists published a study in PLoS ONE where they conclude that coral skeletons help maximize PAR (photosynthetically active radiation) for their algae symbiont, zooxanthellae, while absorbing harmful ultraviolet radiation.

The scientists demonstrated the ability of coral skeletons to absorb UV radiation by placing cnidarians above both a UV reflective surface as well as a substrate of coral skeleton.  They then irradiated them with midrange UVR and measured the UV transmission through the tissues of the cnidarians.

The scientists discovered that cnidarians placed above coral skeleton measured up to four times less UV radiation than corals placed above the reflective surface. The authors of the study write: “In accordance with the lower levels of UVR measured in cnidarians on top of coral skeletons, a similar drop in UVR damage to their DNA was detected.”

In addition, the study also discovered coral skeleton emitted UV as yellow fluorescence.  The photo on the right shows a Stylophora pistillata skeleton irradiated with mid range UVR and photographed through a UV filter.

Furthermore, the scientists discovered coral skeleton reflects visible light (390 to 750 nm) nearly as effectively as the white PTFE reflective surface.  In a nutshell, coral skeleton is capable of reducing UVR by as much as a factor of four but still effectively reflect PAR.

A coral’s thin, translucent epidermis allows light to penetrate all the way to its skeleton … and for good reason.  The skeleton absorbs harmful ultraviolet radiation (emitting it as harmless yellow light) while bouncing photosynthetically active radiation back out to their tissue – like an internal reflector – for photosynthesis .