Corals get Herpesvirus too 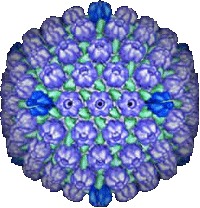 The herpes viruses are a large family of large (for a virus) double-stranded DNA viruses enclosed in an icosahedral protein coat (see above). Many of these cause disease in humans: cold sores, chicken pox and the sexually transmitted herpes varieties, for example. They can also infect fish, and are known to cause problems in koi ponds.

When it comes to coral diseases, the picture has been muddy: there are at least 22 described coral diseases, but for many of these we don’t know what the etiological agent is. Most of the time, bacterial agents are implicated, particularly the genus Vibrio. Now, however, research is beginning to show that corals are susceptible to herpesvirus infection as well (Journal of Experimental Marine Biology and Ecology. Using metagenomic analysis (where a researcher looks at the collective genome of the viral population, rather than at each single virus species), a group lead by Rebecca Vega-Thurber at Oregon State University has found evidence of viral particles inc orals, especially the herpes family.

It is important to note the difference between “found viral particles” and “found viral disease”: while the number of virions did increase after stress episodes, there is no causative link yet established between the virus and the disease. It may be that the diesase is caused by another infectious agent or process, and the viruses are merely opportunists. Future research should be a