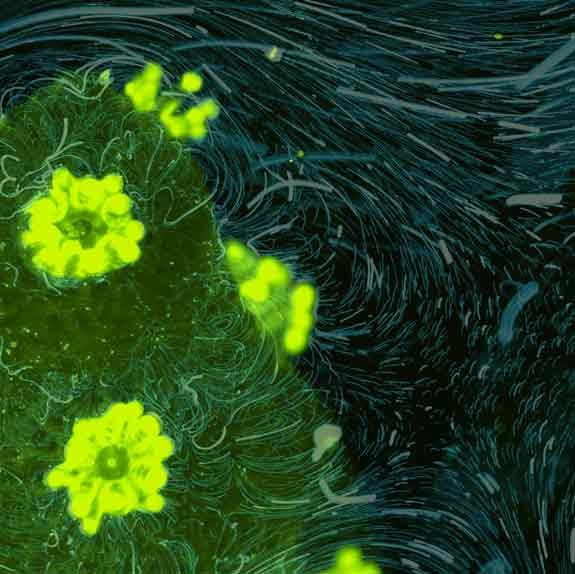 
Vincent Fernandez’s group at the Department of Civil and Environmental Engineering Massachusetts Institute of Technology (MIT) wanted to know more about how water flowed at the boundary layer of the surface of coral, so they designed an experiment to better understand the flow dynamics.  Using video microscopy, the group took high speed video captures of tiny fluorescent beads flowing around and about the surface of a coral, in this case Pocillopora damicornis.

According to their results:

The bundles of arced tracks over the coral surface capture the mixing that is occurring perpendicular to the surface. This ciliary mixing is enhancing mass transport near the coral surface, potentially increasing rates of photosynthesis and carbon fixation by the coral-algal symbiotic system and also affecting invasion of the coral surface by microbial pathogens.

The composite image is generated from 120 video frames taken at 10 frames per second by use of video microscopy. The tracks of the 2-micrometer fluorescent particles are shown superimposed on a single frame to illustrate the relationship between flow and polyp locations. Each polyp is approximately 1 millimeter in diameter, about a thousand times larger than the fluorescent beads. Naturally occurring green fluorescent protein (GFP) gives the coral its green appearance.

On a side note: this image really reminds me of Van Gogh’s Starry Night! 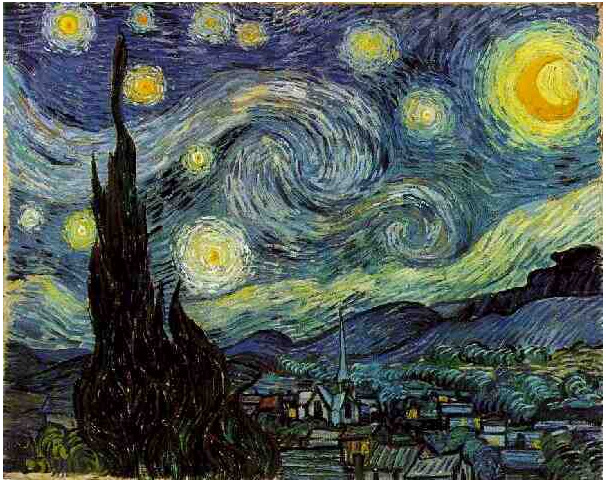