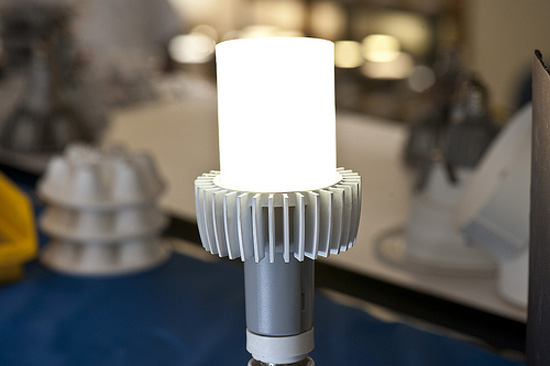 Cree, considered by many to be one of the best producers of quality LEDs, has created a new super bulb.  It was created as part of a Department of Energy sponsored “L Prize” contest designed to create specifications for new “21st century bulbs”.  Cree’s entry not only crushed current bulb technology but created a new standard even for LEDs.  Cree has dubbed the unit “The 21st Century Lamp” and at just 8.7 watts with an output of more than 1,300 lumens it will be at least a little while before we see anyone knock this bulb off its throne.

Released on August 1st, the bulb has a very high color rendering index of 90 which is good even for an LED.  The fact that this LED even exists is exciting.  Cree claims that if these replaced every current bulb in use in the US it could drop total power demand by 16.5%, knocking us comfortably back to the same levels we saw in the late 80’s.  The cylinder bulb doesn’t look like regular or even any LED bulbs we have seen before and that is due to extensive testing. The shape helps spread light more efficiently.

I like seeing companies pushing technology forward and creating new, ever more efficient products.  In a field that is so saturated at this point, there are very few companies you really hear about making these breakthroughs and I think they should be rewarded (as I am sure they will be).  As far as your reef is concerned, I doubt we will see these diodes on the open market in the foreseeable future.  It is promising though, and I am sure that some of the technology used in the bulb will help fuel some of Cree’s new diodes shortly.  At the rate at which LED’s are advancing I think in the next few years we’ll not only see some legitimate halide replacements but also some amazing functionality.