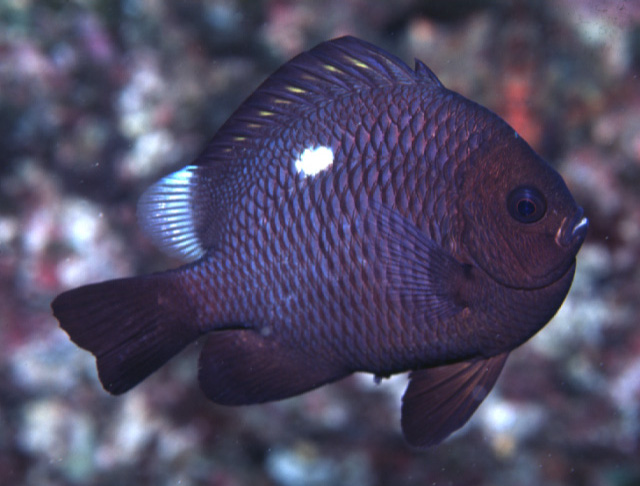 The West Pacific population of domino damselfish is easily recognized by the white posterior tip of the dorsal fin, as well as its dark head and dark fins. The exception is a series of oblique yellowish lines often seen between the dorsal fin spines, though this trait can be observed in several other populations as well and is thus of limited use in diagnosing this fish (though, as we’ll see later on, it may hold some usefulness). 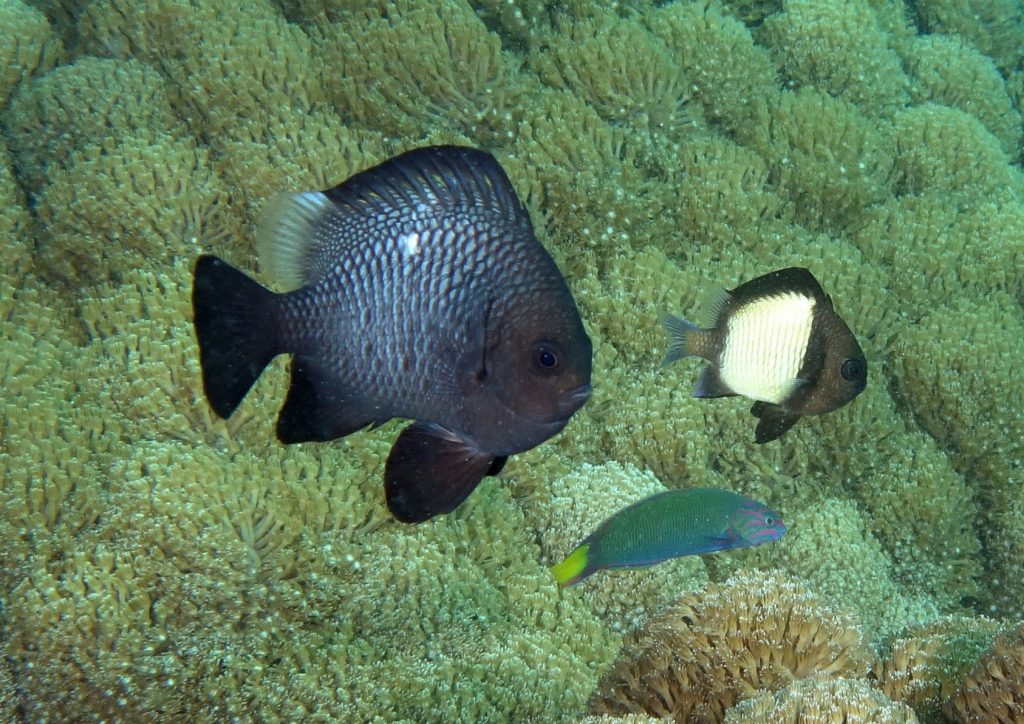 This is the commonest form in the aquarium trade, though, in general, this species is not kept in captivity nearly as often as it used to be on account of its boisterous demeanor with timid tankmates. It occurs from Japan to Australia and east into Vanuatu and most of Micronesia, and, across this vast expanse, this fish is remarkably homogenous in its appearance. Genetic data has consistently placed this species as distinct from those in the Indian Ocean, but, as we’re about to see, it is also quite distinct from those found further east. 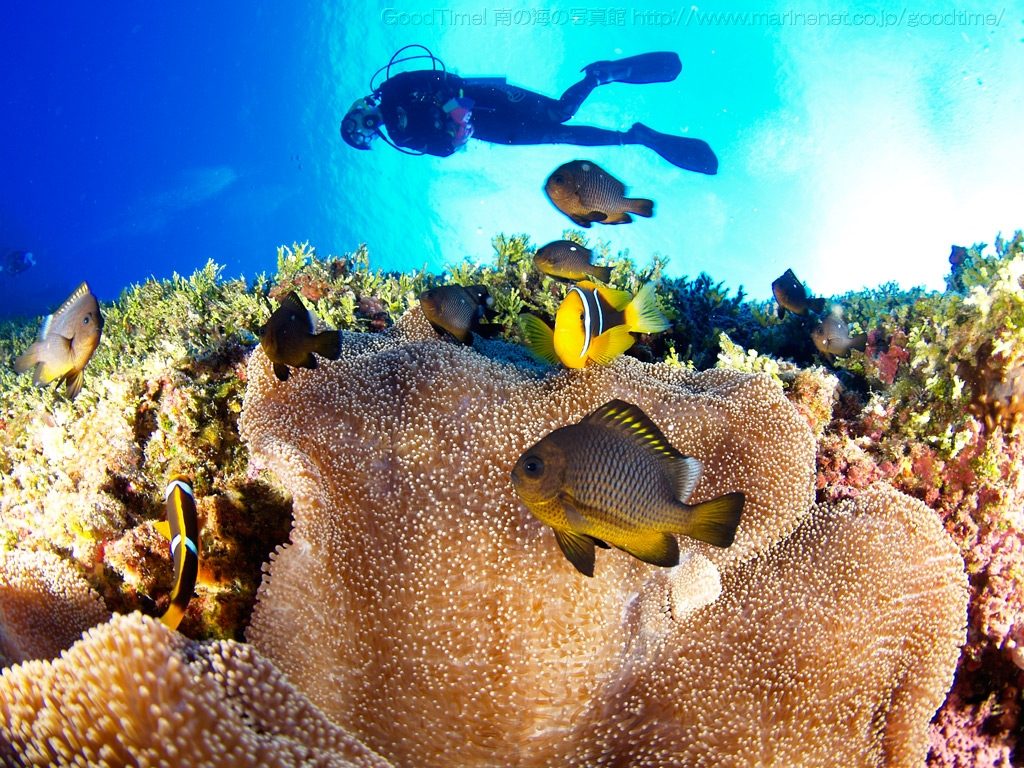 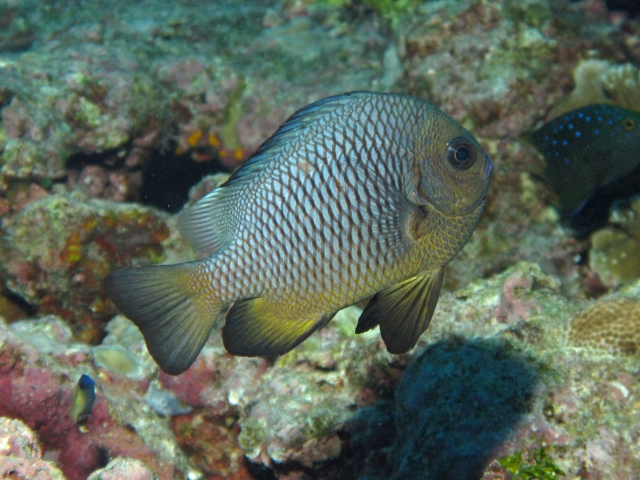 Unfortunately, relatively few images of this fish exist, despite these reefs being heavily dived and studied—it seems nobody bothers to photograph the domino damselfishes. And, thus far, this unique fish has yet to be included in any genetic studies. There is clearly very little we do know of it, other than it’s presence in the Ogasawara Islands and south into Saipan and Guam. Specimens from Yap are somewhat intermediate, but mostly dark. 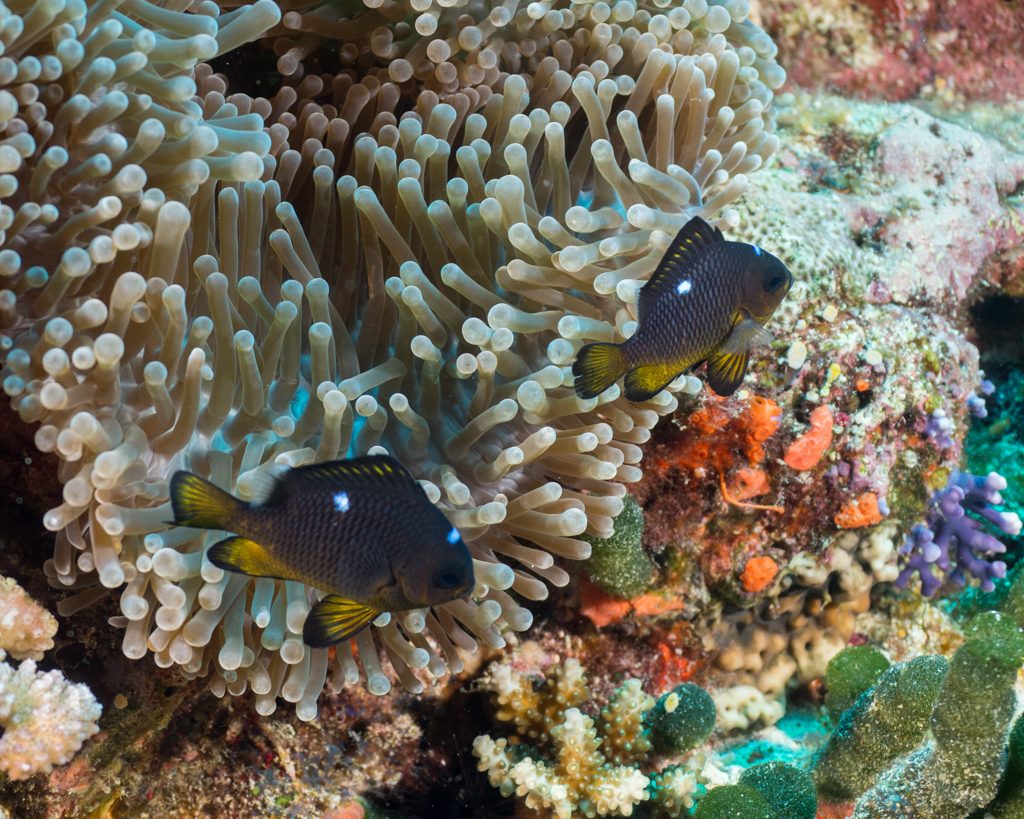 Quite like the previous species, but with the yellow turned up a bit more, the population found at Fiji and its nearest neighbors is instantly recognizable. It differs from the Mariana population only in minor ways, such as the greater suffusion of yellow throughout the belly and the greater expanse of yellow on its fins (though it remains to be seen how variable these traits are in that poorly known population). Exceptional specimens (probably older, larger individuals) can appear almost entirely black, but even these usually evince some small amount of yellow. 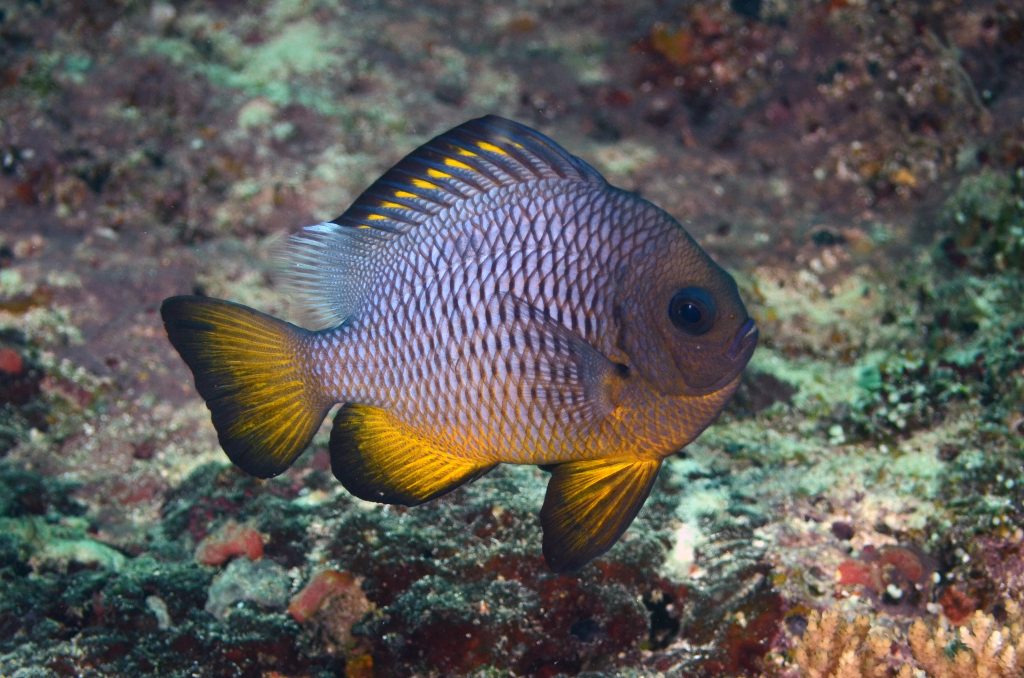 The xanthopteric nature of this unique regional population has been known for some time, but since there are no other known morphological differences aside from color, previous authors favored treating it under a broadly defined concept of D. trimaculatus. Genetic phylogenies have been surprisingly unhelpful in this regard, as the meager mitochondrial data examined thus far has been unable to resolve what should be a clear distinction between this fish and the others in the West Pacific and Micronesia.

Aquarium specimens, sourced from Fiji or Tonga, that have been misidentified as D. auripinnis.

Thus far, this population is known from Fiji, Tonga, Samoa, American Samoa and Wallis Island, though it might extend into the poorly known reefs of Rotuma, Tuvalu, Tokelau and Niue. Fijian specimens sometimes find their way into the aquarium trade, where they have been systematically misidentified as the far rarer D. auripinnis.