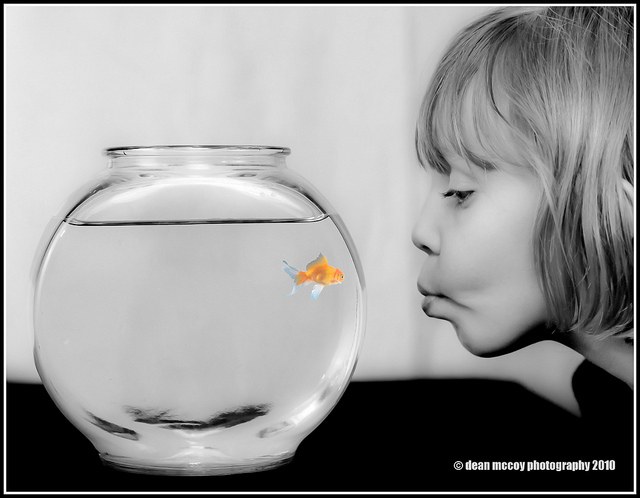 The brain adapts to needs, both in fish and humans

A goldfish in a bowl is a stock allegory for stupidity. Recent brain research supports this assumption. But it is not the fish that is stupid as such, it is the bowl that makes it that way. The bowl is void of any stimuli which the goldfish should react to with its brain.

The situation is made even worse by the fact that pet goldfish descend from cultured stock. This means that the parents of the goldfish have been given the opportunity to parent without having to pass the cruel intelligence test of a real ocean environment – they have never had to find food, outwit predators, and they survived until sexual maturity without any adversity.

The goldfish syndrome may also partly explain problems associated with fish stocking. Salmon cultivated in fish farms are usually unable to adapt to original river habitats. “The fry most likely to survive in fish farms are those who are the first to rush to the feed dispensers. In a natural environment, such foolhardy risk-takers are usually caught by predators in no time,” says Jussi Koskinen, a doctoral student from the University of Helsinki Department of Biosciences.

A cultured fish can also be discerned from a natural fish on the basis of their brains. According to Koskinen, the size of the brain in relation to body size grows faster in fry born out of natural fish than in cultured fries. In addition, the cerebellum, which plays an important role in motor control, is larger in fry originating from wild parents and those reared in an enriched environment.

The brain of a fish adjusts easily to meet its environmental needs. Researcher Abigél Gonda has compared the brain size between populations of nine-spined stickleback (Pungitius pungitius) living in the sea and in sheltered small ponds. These are small, bony and spiky fish, which raise more enthusiasm in scientists than amongst fishermen.

There is a plethora of predators and varying sources of food in a sea, so the olfactory bulbs and telencephala of the marine nine-spined stickleback grow larger in comparison to their pond-inhabiting relatives. In test conditions, however, marine and pond sticklebacs behave in a similar manner.

Individuals who had grown up in a group developed a larger visual brain centre, while those who grew individually developed a larger olfactory centre. “Brain cells consume a great deal of energy, which is why they are allocated on a needs basis. In a group, information about your mates can be perceived visually, whereas when you are on your own, you need to resort more to your sense of smell,” Gonda explains.

Loss of a capacity makes room in the brain

Humans cannot, for obvious ethical reasons, be subjected to similar studies.We do know, however, that the human brain remains plastic and malleable throughout its life.

From the perspective of the brain, the accuracy of performance is roughly equated with more brains cells involved in processing a given phenomenon and that the connections between these brain cells improve. “Congenitally deaf people have superior peripheral vision when tested as adults. And, amazingly, people who are born blind use their visual cortex for completely different tasks, such as learning and memory,” says Kai Kaila, Professor of Neurobiology.