An entirely new genus(!) of fish has just been described from the mesophotic reefs of Indonesia, and, even more exciting, it becomes just the second genus to join the slopefish family. Cymatognathus aureolateralis, the Wavy Jaw Slopefish, is a stunning pink and yellow species which was discovered by chance at a local fish market in Northern Sulawesi, where it had been collected as bycatch. Our only glimpse at this fish in life comes courtesy of a single, tantalizing image captured at a depth of 200 meters as part of a coelacanth survey. 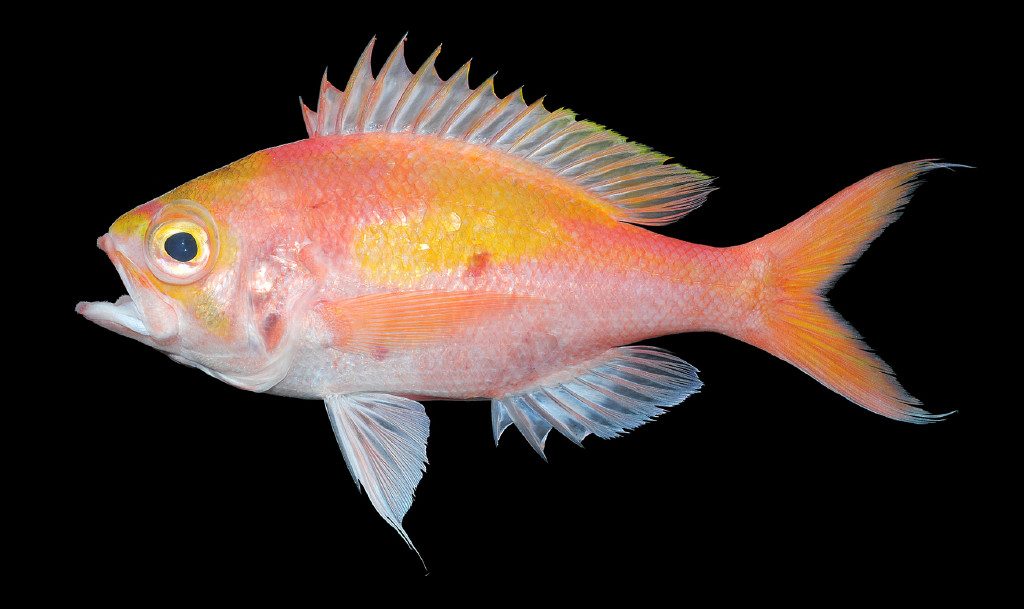 Slopefishes (Symphasanodontidae) are little known within the aquarium world, owing to their preference for relatively deep mesophotic reefs. And, until now, just a dozen species were known, all belonging to the genus Symphysanodon. This group is easily confused with Pseudanthias and some of its relatives, as both tend to share a fairly similar body shape and color palette. However, the two groups are considered to be rather distantly related and differ in several skeletal characteristics. Slopefishes are also behaviorally distinct, as they are typically solitary rather than haremic.

The differences which serve to separate Cymatognathus from its slopefish brethren are fairly subtle and relate to minutia of the teeth, nostrils and (as alluded to in the common name) the jaw shape. No, these are not terribly exciting differences, but they are apparently of evolutionary significance in this family. More obvious to the casual observer is the greater relative body depth in comparison to most Symphysanodon. Rather than the delicate, gracile build of that genus, Cymatognathus is more of a hulking brute whose proportions bring to mind some of the more portly constructed anthiadines, such as Odontanthias.

With just three specimens known, there’s much we have yet to learn about this exciting new species. For instance, what is the significance of its unique wavy jaw shape and bulky frame… how widespread is C. aureolateralis in the Indo-Pacific… how deep does it occur… and why have we only just now found it? How does a fish this colorful escape notice for so long?