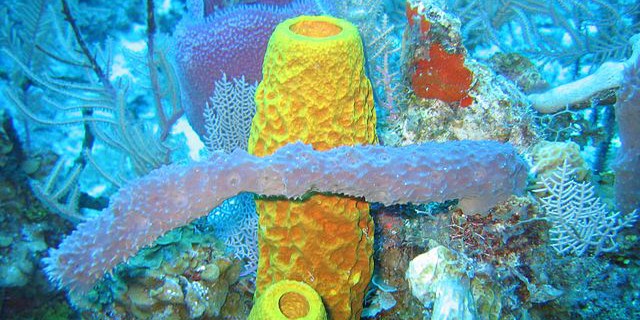 There is a huge number of sponge species in our world’s oceans. Some of them are bacterivores, some are carnivorous, some even harbor zooxanthellae. Yet, despite their great diversity of function, sponges are highly conserved in form. Often, differences between even distant relatives are so subtle that only trained experts with the right tools are capable of conclusively identifying them. Because there are so many different but similar species, traditional field guides (especially those in print form) are pretty much useless. The difficulty in identifying these primitive animals has been blamed for a general lack of attention to the group by biologists. That notwithstanding, comprehensive, well-illustrated and regularly updated catalogs of sponges are much needed; this is especially so if one considers the abundance and ecological importance of sponges in nature, and the fact that sponges are becoming even more ubiquitous as many coral species decline.

The Sponge Guide, an online database devoted to sponge identification, has been notably filling this gap. Because it is electronic, it can be more extensive and be easily updated as needed. Work on the guide began in 2000, when sponge taxonomist Sven Zea was conducting research in the Bahamas under Joseph R. Pawlik. Over the next decade the pair was joined by Timothy P. Henkel, who was to contribute his knowledge of databases and computer programming. Though it was initially meant for use by researchers in the expedition, the photographic database (tSG, spongeguide.org) was eventually published online in 2009. And, then they just kept adding to it. Recently, the collaborators have launched the third edition of the database.

The main aim of tSG is to clearly demonstrate morphological differences between species. Hundreds of individual species and morphs are characterized. Most of these have two or more accompanying photographs of specimens shown in the natural habitat. Photographs include major descriptive features (e.g. color, consistency, morphology, habitat, location). Physical descriptions are based upon the appearance of the sponge as seen by the diver in the wild. Each taxonomic identification is verified by the authors.

The guide is made possible by grants from entities such as the National Science Foundation (NSF). Please note that the guide is free to use only for educational and instructional purposes. To use tSG material for commercial or publication purposes, please contact spongeguide@gmail.com. To review the database, please visit: http://spongeguide.org.