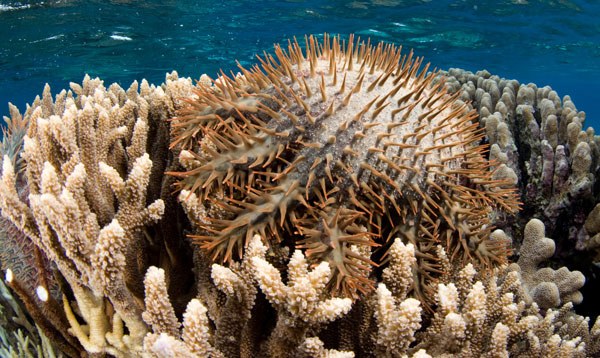 On the trail of the coral-killing starfish

Acanthaster planci is the principle natural enemy of reef-building corals. Outbreaks of this coral-feeding starfish occur periodically, due to reasons that remain unclear. It decimates entire reefs in the space of just a few years, as has been the case in French Polynesia since 2004. A new study conducted by IRD researchers and their partners(1) describes this population explosion around Moorea, the “sister island of Tahiti”(2). The rate of living coral cover in ocean depths and lagoons alike has dropped from 50% (healthy reef) to under 5% in 2009. The ecosystem will need at least a decade to be restored to its original state.

The crown-of-thorns starfish (Acanthaster planci) is the greatest natural threat to coral populations. Outbreaks of the species occur periodically in the Indo-Pacific ocean and lead to the devastation of entire reefs, as IRD researchers and their partners(1) observed in French Polynesia.

The starfish has spread from island to island

The archipelago has been suffering from a new population explosion of the predatory starfish since 2004. It is one of the most intense and devastating outbreaks ever recorded. The outbreak of Acanthaster began in a very specific location in the Austral and Leeward Islands, then in 2006, the starfish colony spread to Tahiti and Moorea(2). Thanks to a dozen stations around the island of Moorea, scientists were able to make spatio-temporal observations of the dynamics of the infestation of coral populations. Thus, in a new study published in PLoS One, they described the spread of the coral reef invasion.

The starfish first settled in the deeper areas along the outer slopes of the reef, around 20 to 30 metres below the ocean surface. It then rose to a depth of approximately 6 metres, and even colonised certain parts of the lagoon. The damage was gradually observed: from 47% of living coral cover at one of the stations in 2006, for example, this rate dropped to 21% in 2007, 6% in 2008 and 2% in 2009: a disastrous state of affairs that disrupts the structure and functioning of all reef communities (including other coral-feeding species, such as butterflyfish, etc.).

What are the reasons behind outbreaks of Acanthaster planci? In Australia, where the pest is also rife, invasions occur after years with high rainfall. Rainfall leads to the excess release of nutrients from human activities and the proliferation of algae on which echinoderm* larvae feed. In Polynesia, however, anthropic pressure seems too low and localised to explain such an outbreak of the starfish. The current lack of data on the subject means the phenomenon remains a mystery.

Since the causes of outbreaks remain unclear, there is limited ability to fight against Acanthaster planci in order to protect economic activities around the coral barrier, such as tourism and diving. Researchers are currently studying processes to “recruit” new corals, in other words to repopulate the reef and make it more resilient. Without a new widespread disturbance, a coral ecosystem would need 10 to 30 years to be restored to its original state.

1. CORAL – CRIOBE Labex in Moorea, Universities of Brisbane in Australia, of Florida in the United States, of Réunion and the Australian Institute of Marine Science.

2. Tahiti and Moorea are called the “Windward Islands” as opposed to the “Leeward Islands” (Bora-Bora, Raiatea, Maupiti). Together, they form the Society Islands. 3. With 250,000 inhabitants across 3,400 km² of the total land mass, French Polynesia has a low population density.