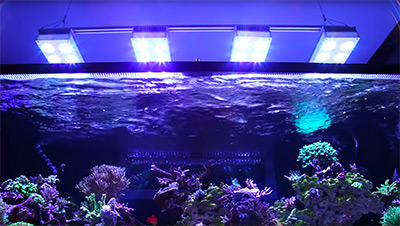 Lighting affects how we visually enjoy the hobby and, more importantly, the vast majority of the corals in our tanks are photosynthetic. In this two-part article, we will first cover some of the basics of the light itself and then discuss the various lighting technologies people use to light their reefs.

Coral and zooxanthellae: Many coral have a symbiotic relationship between the coral animal and dinoflagellates called zooxanthellae. Zooxanthellae live in the tissue of the coral and, like algae, contain chlorophyll for photosynthesis. The byproducts of photosynthesis are things like simple sugars that the coral hosts can use as an energy source. It is for this reason that coral are often described to the layperson as having traits of both plants and animals. The color of zooxanthellae is varying degrees of brown. However, there are over 80 known varieties of zooxanthellae MORE