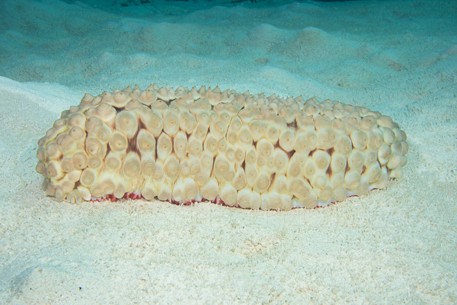 I have a beautiful, deep sea-cucumber for you all today that was found by our Smithsonian scientists this year on the island of Klein Curacao. This thing was big (14-16 in) and super colorful, and has a wild-looking texture all over its body.

Sea cucumbers are echinoderms from the class Holothuroidea. They are marine animals with leathery skin and an elongated body containing a single, branched gonad. Sea cucumbers are found on the sea floor worldwide. The number of holothurian species worldwide is about 1,717, with the greatest number found in the Asia-Pacific region. Many of these are gathered for human consumption and some species are cultivated in aquaculture systems. The harvested product is variously referred to as trepang, bêche-de-mer, or balate. Sea cucumbers serve a useful role in the marine ecosystem as they help recycle nutrients, breaking down detritus and other organic matter after which bacteria can continue the degradation process.