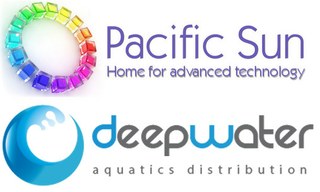 An industry leader in marine aquarium distribution has become an exclusive distributor of one of the most advanced and fastest developing types of artificial lighting, and has also made this technology available to the United States.

Representatives with Deepwater Aquatics announced today that the company is now the Exclusive North American Distributor for Pacific Sun.

“We’re very excited about this opportunity,” said Dean Tapper, Vice President of Sales for Deepwater Aquatics, a company that was officially opened in 2007 as a full service marine aquarium distribution company, and rapidly expanded by offering some of the most premium brands on the market to local stores, such as Aqua Illumination, Aquaforest as well as (50) more specialty brands. “Pacific Sun products will now be available to US retailers and consumers.”

Pacific Sun is a leading European Aquarium Lighting and specialty Manufacturer. Pacific Sun was founded in 2002 dealing with import and breeding of marine animals and propagation of hard corals. In 2009 Pacific Sun launched their first mass-produced fixture which gained worldwide attention. Every year Pacific Sun continues to innovate and produce features that increase the options available to aquarists.

The Pacific Sun LED and T5 aquarium lighting fixtures have wireless control features that are available with the PC and MAC products, as well as Bluetooth technology.

In addition to that, Tapper stressed, the user is able to access other advanced features of the light control, such as changing the color temperature (in the 13,000 – 23,000K range), altering light intensity according to a curve (PAR Activity), and controlling the lamp’s cooling system. All of these parameters are configured through a clear and easy-to-use application run on a PC-based computer (Windows or Mac OS). Communication with the lamps are available thru Bluetooth interface or Wi-Fi interface

Pacific Sun not only produces lighting options for aquarists, but also produces the award winning Kore 5th Dosing station and Auto Top Off systems that bring precision to aquarium automation.

Deepwater Aquatics expects to begin shipping orders to retailers across North America as early as February, 2016.