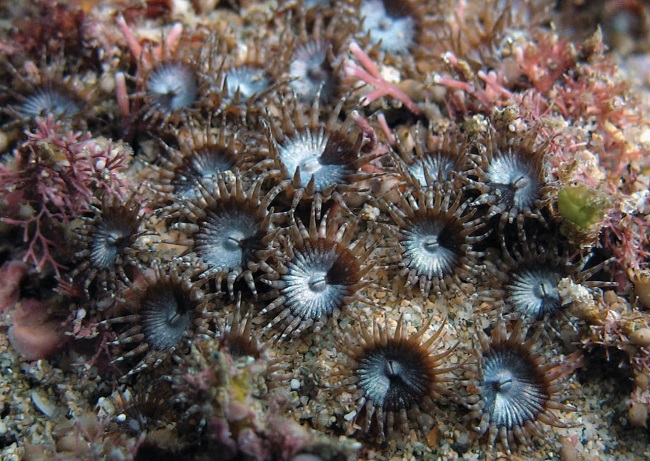 Zoantharia is an order of anthozoans that resembles both sea anemones and corals. All members are benthic, most are colonial and quite a few are superficially quite similar to one another. In fact, some species share so many morphological characteristics that they are still being sorted out by taxonomists to this day. Owing to their oftentimes cryptic nature or rarity, many members of suborder Brachycnemina may be easily overlooked. One such example is the brachycnemic zoanthid family Neozoanthidae. The obscure family was erected in by Herberts in 1972 after the discovery of some novel specimens in Madagascar. Neozanthidae included only one species—Neozanthus tulearensis—until fairly recently.

The results of a study published in Marine Biology reveal that two more species belong in the genus. James Reimer, lead author of the paper, formally described two new neozoanthid species. Like Neozoanthus tulearensis, both new species—Neozoanthus calyi and Neozoanthus urchina—are small, have blue, purple, red or gray oral discs, are associated with symbiotic dinoflagellates and occur in areas of high flow with some siltation. Each of the three species is distinguished by exact distribution, oral disk color and average numbers of tentacles. They appear to be a link in the evolutionary line of the order, having a partially encrusted form.

The research team was initially surprised to find Neozoanthus in Japan. However, upon further investigation, they discovered that the species was actually quite abundant there. It is possible that they were mistaken for other species in the past. According to Reimer, “This research demonstrates how little we know about marine biodiversity, even in regions relatively well researched.”