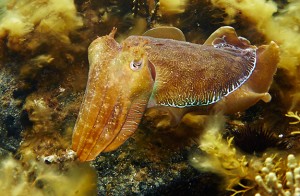 Australia’s beloved massive cephalopod, the Giant Cuttlefish (Sepia apama) have been gathering in Southern Australian waters since the late 1990’s where there numbers spiked to over 180,000. Now it looks bleak for the big guys as their numbers dwindled down by a whopping 93%. That’s honestly horrifying. Attracting a glut of filmmakers, the world’s largest cuttlefish once populated in masses near the Lowly peninsula near Whyalla in South Australia, an area known for its rusted, 2.4km-long jetty at Port Bonython. But their numbers have since plummeted to a minute 13,500 in 2013. Experts speculate that their original overabundance was an unusual spike that has since passed. Lucky divers who got to witness them in their natural glory described them as “a great rainbow-colored swarm that blankets every rock surface. Their jostling often breaks out into bold physical displays and rapidly throbbing patterns, their bodies glowing as if lit by LEDs”. Sounds like quite the sight. The creatures are beyond cool.“They have three hearts, this doughnut-shaped brain, blue blood, a beak, eight arms and two [retractable] feeding tentacles,” says Alex Schnell, a marine ecologist studying cuttlefish at Macquarie University in Sydney. “It’s pretty much the closest thing you can get to studying an alien without leaving our atmosphere.” Read more about the fascinating cephalopod and it’s untimely decline over at Australian Geographic.