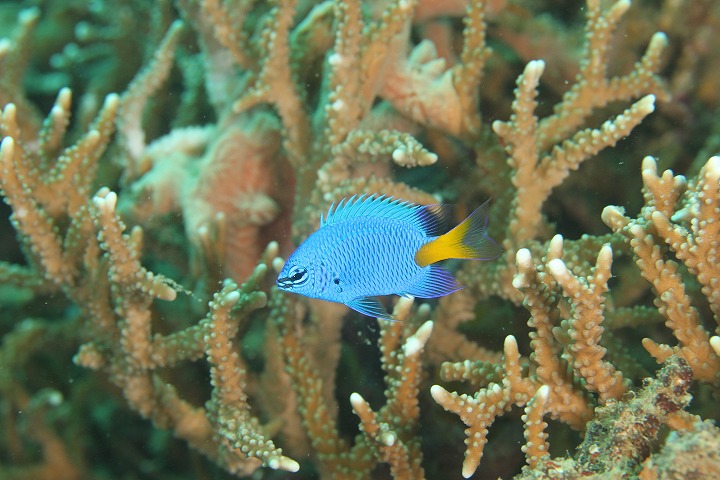 Damselfishes are usually thought of as a cheap staple of the aquarium trade, more often treated as “starter fish” than desirable species in their own right. But such prejudices belie the fascinating evolutionary story these fishes have to tell. One group in particular—the Chrysiptera hemicyanea Complex—stands above its pomacentrid brethren for the vibrant beauty and evolutionary enigmas of its members. Here we find such common and recommendable species as the Yellowtail, Azure, and Springer’s Damselfishes, as well as several others less-familiar to the average aquarist.

The ten or so species in this group are placed in Chrysiptera (Greek: “gold-finned”), a diverse genus of nearly thirty recognized taxa which currently finds itself in a state of flux. Molecular data has shown that several species belong to distinct lineages far distant from the type species (the Blue Damselfish C. cyaneus). Some sporadically-seen aquarium species (kuiteri & tricincta), as well as some less-familiar ones (brownriggii & unimaculata), will likely be reclassified into new genera, but this awaits a formal taxonomic revision of the genus.

The members of the hemicyanea Complex can be identified, in part, by their relatively tall body compared to more elongated species of Chrysiptera, as well as the highly incised margin of the spinous dorsal fin. These fishes are entirely restricted to the Coral Triangle—a region of peak coral reef diversity located from Bali, Indonesia, north to the Philippines, and east to the Solomon Islands. Unlike many other groups from this region, these damselfishes appear to have a reduced ability to disperse, and are often undocumented from some of the peripheral reefs of the West Pacific (e.g. Palau, the Ryukyu Arc, Cocos-Keeling/Christmas Islands, Western Australia). This may be related to the benthic egg-laying habits of the genus, which results in a shortened pelagic larval stage.

As aquarium inhabitants, these are some of the least aggressive members of the family, but they are still a ways away from being piscine pacifists. Specimens kept in smaller aquaria become highly territorial and are known to pester docile species to death. Conversely, mixing these with more aggressive damselfishes (Dascyllus, Pomacentrus, even other Chrysiptera) is a recipe for disaster. And, despite being schooling fishes, keeping these in groups can be highly problematical. Males are highly aggressive towards other males of their species (and presumably related species), and the dominant male will eventually succeed in killing his rivals unless placed in an appropriately sized aquarium—a six foot aquarium might be a safe minimum for housing multiple males. In spite of all these limitations, a single specimen (or an established group) from this complex makes for an ideal addition to any moderately sized reef tank. 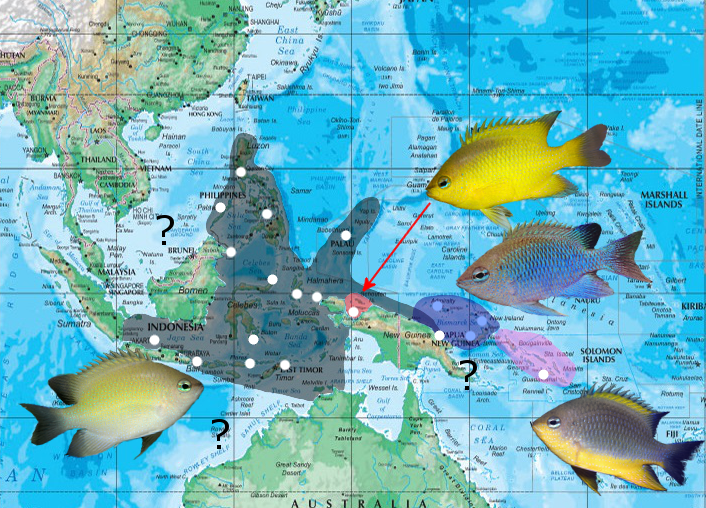 Notes: This is the only species which encompasses the entire Coral Triangle, but it appears likely that this is a misrepresentation of the true diversity present across its range. Adults show some amount of regional phenotypic variation, particularly in the Solomon Islands, where the adults are mostly brown and the juveniles have a limited amount of yellow ventrally. Most other regions (Bali, Cebu, Palau, Cenderawasih) show juvenile with yellow extending from the pelvic fins to the soft dorsal, but note the solid blue form seen in Raja Ampats. Extensive molecular work is required to sort this out, but, at the very least, the Solomon Islands phenotype seems worthy of species recognition. 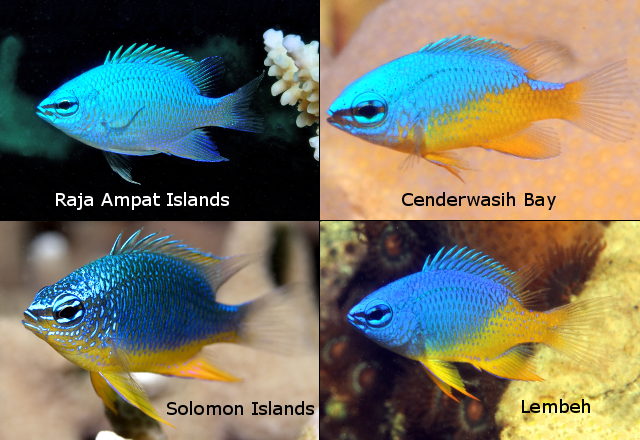 Notes: This species appears to be endemic to islands of the Bismarck Sea. In many other groups (e.g. Cirrhilabrus, Pseudanthias), this region is homogeneous with the rest of Melanesia, but benthic spawning fishes such as damselfishes appear to bend this rule. C. oxycephala has been reported from parts of this range, and it’s unclear how distinct these two “species” truly are and whether they may hybridize. It’s unlikely that sinclairi has ever been collected for aquariums.