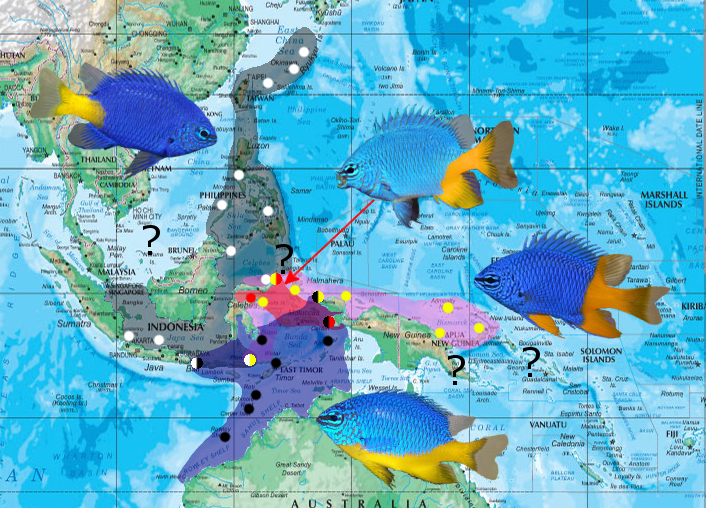 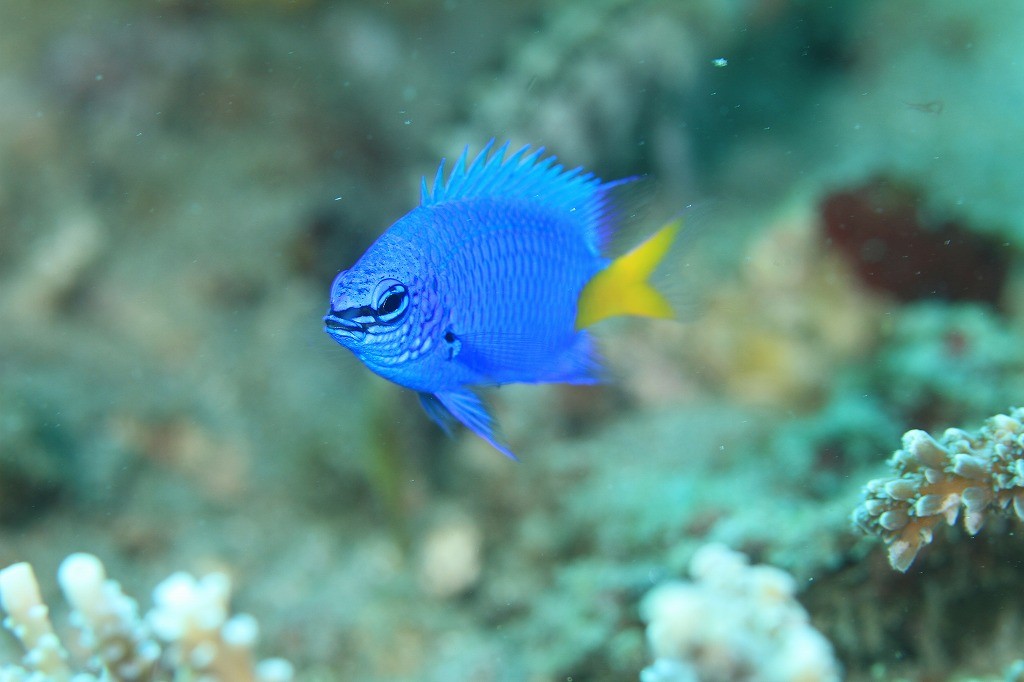 Notes: Originally described in 1918 as Abudufduf parasema. This species ranges further north than any other in its complex, reaching the Amami Islands of Japan, but apparently unknown from the main islands. It’s difficult to theorize why this species should be found here, but not some of the other Philippine populations (e.g. cf springeri & oxycephala). 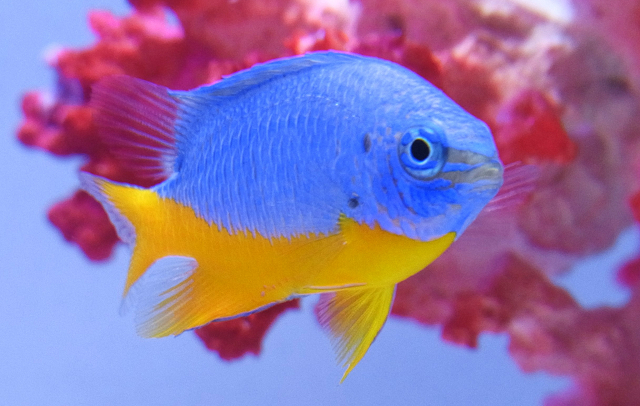 Notes: Also known as the “Royal Damselfish”… neither common name is particularly informative. The only species in this complex authoritatively documented from Western Australia.

Notes: Only described in 2008, this species is a perfect intermediate between parasema and hemicyanea. A detailed genetic study is warranted to help in understanding its evolutionary origins, and whether it might be of hybrid derivation. It is known to hybridize with C. arnazae at Lembeh (see below). Aquarium specimens are unknown, but collection does take place in parts of its range. 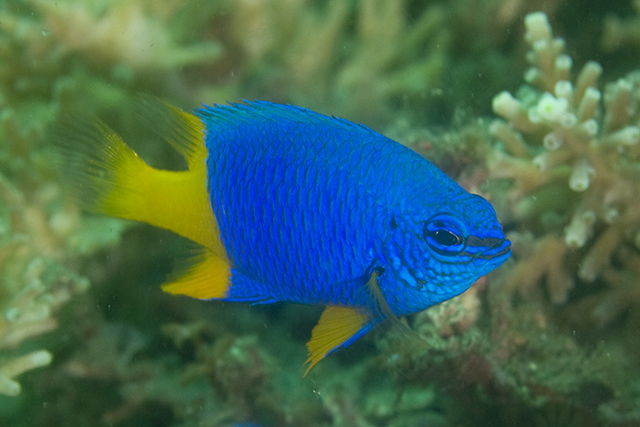 Notes: Described in 2010, this uncommonly collected species is sometimes seen as the Half-blue Damselfish—a confusing choice given the etymology of hemicyanea. This is primarily a Melanesian species, though it extends to Northern Sulawesi and follows the prevailing currents southward to Flores.

Phylogenetics of the hemicyanea Complex

To date, no phylogenetic studies have been published on this group, but damselfish authority Dr. Gerry Allen is actively studying them. The phylogenetic tree proposed here is based on color patterns, meristics and biogeography; what’s lacking is some of the detail needed to properly understand which populations are reproductively isolated to the extent that we would call them “species”. 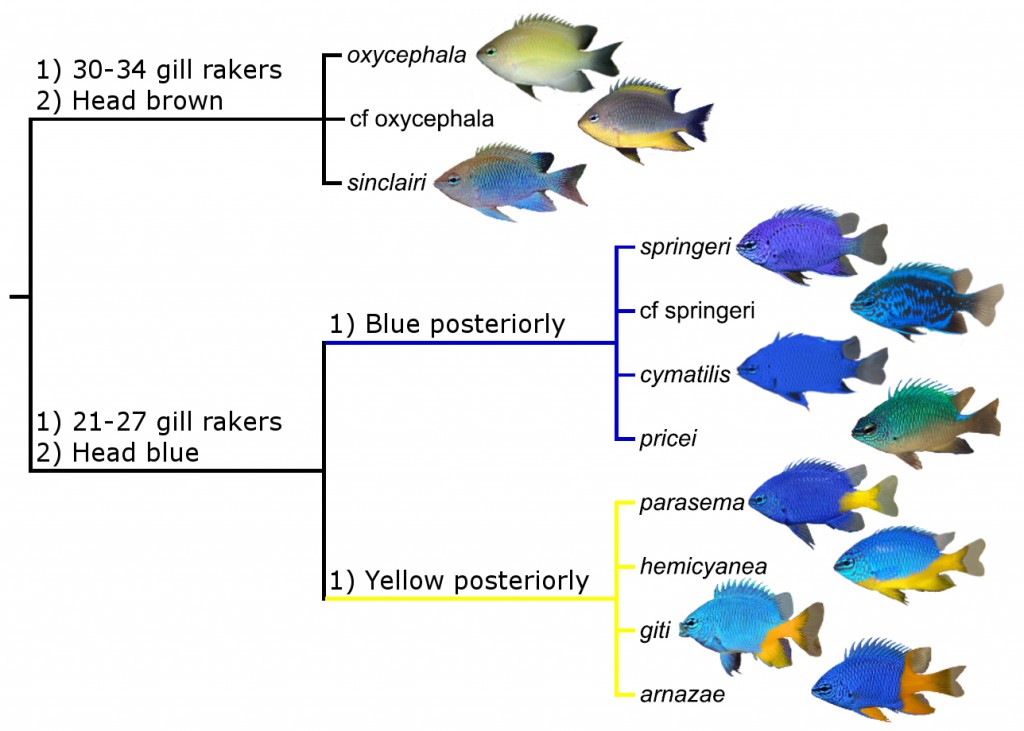 C. oxycephala and C. sinclairi forms a basal group in this complex, differing in their higher gill raker count, larger body size, and unique color pattern. The juveniles of oxycephala are, however, quite similar in coloration to C. hemicyanea and C. pricei, which perhaps gives an idea of what the ancestral condition may have looked like. It’s quite plausible that these smaller and more-colorful species are paedomorphic—meaning they retain the juvenile morphology into sexual maturity.

The remaining two groups each contain four species and can be identified by their color patterns (meristics are mostly identical amongst these species). One lineage is composed of species with a prominently yellow caudal fin and caudal peduncle, often with yellow extending to other parts of the body. The remaining clade consists of taxa which are entirely blue, with the exception of pricei, which has a somewhat unique coloration.

C. pricei is an interesting species for a couple reasons. Biogeographically, it is restricted to Cenderawasih Bay, an area known for harboring numerous endemics—C. oxycephala may have its own here. The reason for this endemism has to do with the complex geological history of the region, with shifting tectonic plates and varying water levels resulting in periods of isolation. This seems to be one of the main drivers of speciation in many groups of reef fishes, but rarely is it so evident as it is here.

The coloration of pricei is rather anomalous given that it likely belongs in a clade with the other primarily blue species. Presumably, the isolation and inbreeding pricei experienced in Cenderawasih resulted in an atavistic return to an ancestral character state, namely, the oxycephalus-like color pattern. Another possibility is that this species is more basal than I have indicated, though this is argued against by its lower gill raker count. In general, regions which foster endemic speciation seem less likely to serve as a stronghold for basal lineages, and so it seems more plausible that pricei is but a strange deviation of the more widespread cymatilis. 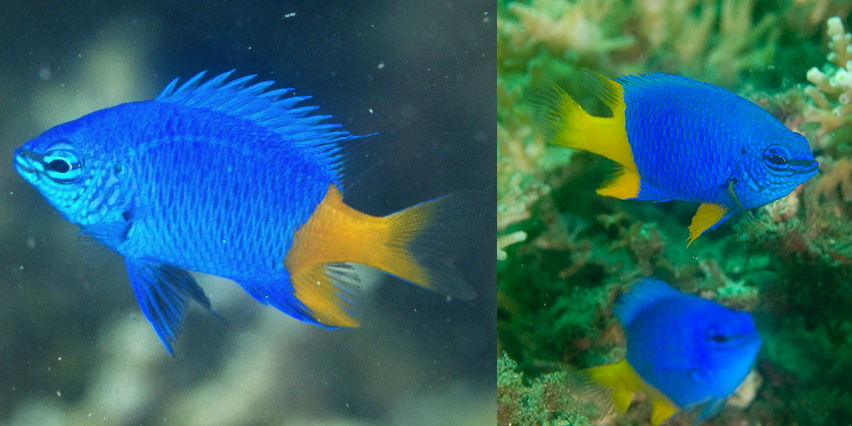 An apparent hybrid of C. arnazae and giti, from Lembeh. Credit: risingmoon and Masamichi Torisu

The evolutionary past of the yellow-tailed species is poorly understood. For three of these taxa, large portions of their respective ranges are separate, likely indicating where these populations originated from—C. parasema in the South China Sea/Philippines, C. hemicyanea in the Banda Arc or perhaps Northwestern Australia, C. arnazae in New Guinea. But what do we make of giti? Tomini Bay in Northern Sulawesi is home to several other endemics or near endemics, such as Cirrhilabrus aurantidorsalis, Paracheilinus togeanensis and Pictichromis dinar. It’s clear this region has a complex geological past, but the mechanism which isolated these fishes here and encouraged their speciation is not well-understood. Hybrids are known, and three of these species are known to occur sympatrically at Lembeh in Northern Sulawesi. Is it far-fetched to think that perhaps C. giti, which looks like a perfect intermediate in its patterning, might be of hybrid derivation? 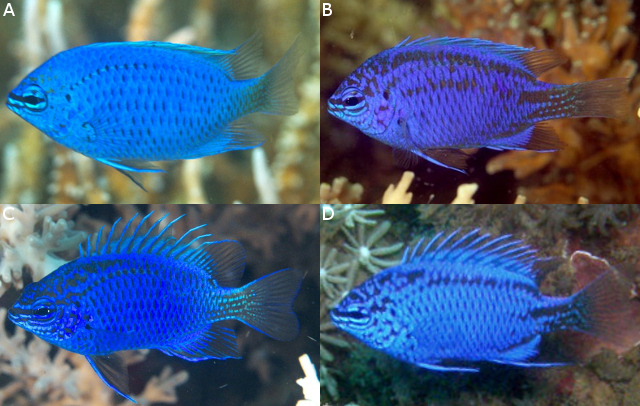 The biogeography of the hemicyanea damselfishes should help make apparent the fact that evolution is not an exclusively historical process. What does the future hold for all this variety living in the Coral Triangle? Which populations are diverging towards speciation, and which are hybridizing and homogenizing their gene pools? For the student of evolutionary biology, there are few groups as fascinating as these brilliant little fishes, and we certainly have much more to learn.