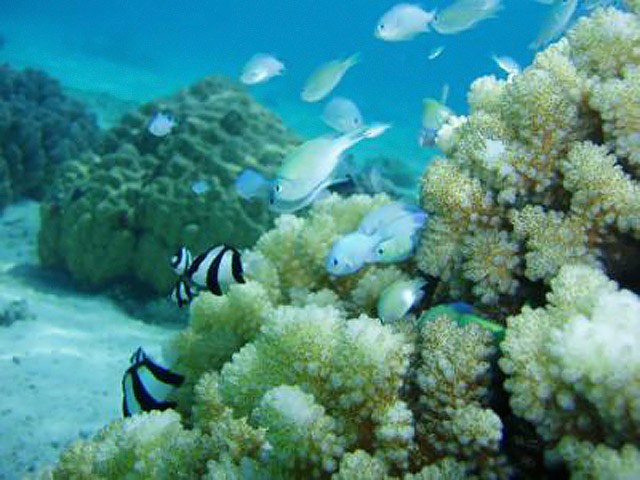 
Some corals prefer to host only one dominant species of zooxanthallae (Symbiodinium sp.) and now we might have an answer why.  Logic has always suggested that when corals host more types of symbiotic algae, they can better cope with environmental shifts.  However, new University of Hawaii at Manoa research finds that the opposite may be true.  Corals with more species of zooxanthallae actually fare worse to stress.

So much for common sense!

Researchers at the University of Hawaii — Manoa (UHM) School of Ocean and Earth Science and Technology (SOEST) made a discovery that challenges a major theory in the field of coral reef ecology. The general assumption has been that the more flexible corals are, regarding which species of single celled algae (Symbiodinium) they host in coral tissues, the greater ability corals will have to survive environmental stress.

In their paper published August 29, 2012, however, scientists at the Hawaii Institute of Marine Biology (HIMB) at SOEST and colleagues documented that the more flexible corals are, the more sensitive to environment disturbances they are.

“This is exactly the opposite of what we expected,” said Hollie Putnam, PhD candidate at UHM and lead author of the study. This finding was surprising, as it is thought corals exploit the ability to host a variety of Symbiodinium to adapt to climate change. “Our findings suggest more is not always better,” she continued.

“The relationship of coral species to their algal symbionts is fundamental to their biology,” says David Garrison, program director in the National Science Foundation (NSF)’s Division of Ocean Sciences, which funded the research. “This study gives us a new understanding of how corals are likely to respond to the stresses of environmental change.”

Reef corals are the sum of an animal (host), and single celled algae that live inside the corals’ tissues (also called ‘endosymbionts’). This is a mutually beneficial arrangement — the coral provide protection and keep the algae in shallow, sunlit seas; and the algae produce large amounts of energy through photosynthesis, which coral use to survive and build their skeletons. The stability of this symbiosis is critical to the survival of corals and if they lose their endosymbionts they bleach and often die. Corals can host different types of endosymbionts, which affects their response to stress.

Putnam and other scientists from Dr. Ruth Gates’ laboratory at HIMB took tiny tissue samples from 34 species of coral in Moorea, French Polynesia. By analyzing the DNA from the endosymbionts in these samples, they were able identify the types of Symbiodinium. This revealed that some corals host a single Symbiodinium type that is the same in all individuals of that coral species, and that others host many types that vary among individuals within a coral species.

“The corals we sampled spanned a range of environmental sensitivities from resistant to susceptible, and we were able to link, for the first time, patterns in environmental performance of corals to the number and variety of symbionts they host,” reported Putnam. These patterns show that corals hosting diverse Symbiodinium communities, those that are flexible with respect to endosymbionts (termed ‘generalists’), are environmentally sensitive. In contrast, environmentally resistant corals were those that associate with one or few specific types of Symbiodinium (termed ‘specifists’).

“Coral reefs are economically and ecologically important, providing a home for a high diversity of organisms necessary for food supplies, recreation, and tourism in many countries. The better we understand how corals respond to stress, the more capable we will be to forecast and manage future reefs communities,” said senior author Professor Ruth Gates. Coral reefs can undergo mass mortality due to high temperatures, and ocean acidification is threatening the capacity for skeletal growth. These global stressors are superimposed on the local threats of pollution, coastal development and overfishing, together threatening the persistence of corals as a functional ecosystem in the future.

In the future, the Gates Lab will examine what causes the differences in success between corals that are flexible and inflexible in their Symbiodinium associations and compare the symbiotic flexibility in corals and reefs across much larger areas — in locations such as Hawaii, Moorea, Taiwan and American Samoa. This further understanding will allow better predictions of the future of reefs under further ocean warming and acidification.