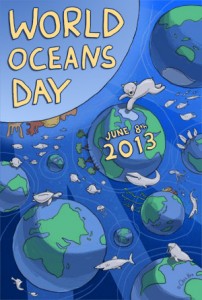 Billions of humans, plants and animals depend on clean, healthy oceans in order to survive and thrive.  The oceans are known as the lungs of our planet, providing an estimated 50% of the oxygen we breathe; they regulate the weather patterns; they are a major source of food, minerals and they promote economic activities around the globe.   World Oceans Day is the official UN-designated international day of ocean celebration.

WORLD OCEANS DAY is celebrated on 8 June every year and the theme this year was “Together we have the power to protect the ocean!”  The day aims to help you make a difference in your  life, community, and world by taking action to protect our oceans…not just for future generations but for the present as well!  One of the biggest problems is over-fishing but there are other threats such as climate change, pollution and even marine litter such as plastic bags and box strapping that claim the lives of many sea creatures such as turtles, seals, whales, dolphins and others.

Although the day has passed, it doesn’t mean that we can’t do anything till next year.  Simple things can be done to make a difference, even if it’s just gathering knowledge and making yourself more aware of what the problems really are.

Visit: http://worldoceansday.org/2013events/ and see which events took place this year and see what you can do to make a difference and plan an event next year.