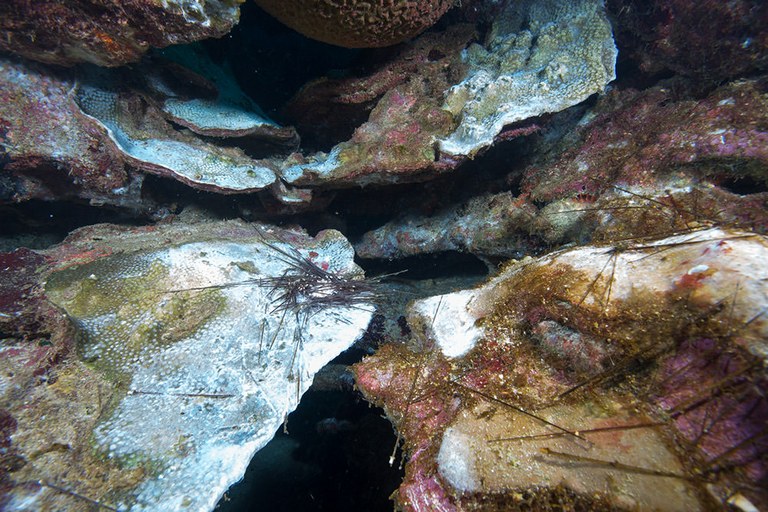 The remains of a sea urchin recently dead from a large-scale mortality event at the East Flower Garden Banks laying atop dying star coral colonies – these are coated with a white mat of unknown material. Image credit: FGBNMS/G.P. Schmahl


NOAA reports up to 50% of reef invertebrates at the East Flower Garden Bank are suddenly and unexpectedly dead, and scientists do know know who the killer is yet.  The key evidence left in the wake of this wanton destruction is an unknown white slime that is covering many of the deceased.

Sanctuary Research Coordinator Emma Hickerson states the die-off is observed at three dive sites that charter boats typically visit.  Scientists are now investigating the cause while recommending the public to avoid the area (for the good of the reef as well as the potential health threat the unknown pathogen may pose to people).

The East Flower Garden Bank was considered one of the healthiest reefs in the region with no reported mass mortalities (bleaching or otherwise) since the 1980s.  Therefore, its sudden deterioration has surprised authorities.  For now, the West Flower Garden Bank (twelve miles away) appears still heathly.

In 2011, scientists established the connection between “white pox,” a disease that killed Caribbean Acropora, with a bacterium found in human sewage (human waste to be exact).  In 2013, new research also discovered that a virus caused “white plague” disease in corals.  Both “white pox” and “white plague” often left white films on corals.  But both of these diseases only killed corals.  The scary thing is the mysterious killer at East Flower Garden Banks seems indiscriminate, killing all sorts of invertebrates.