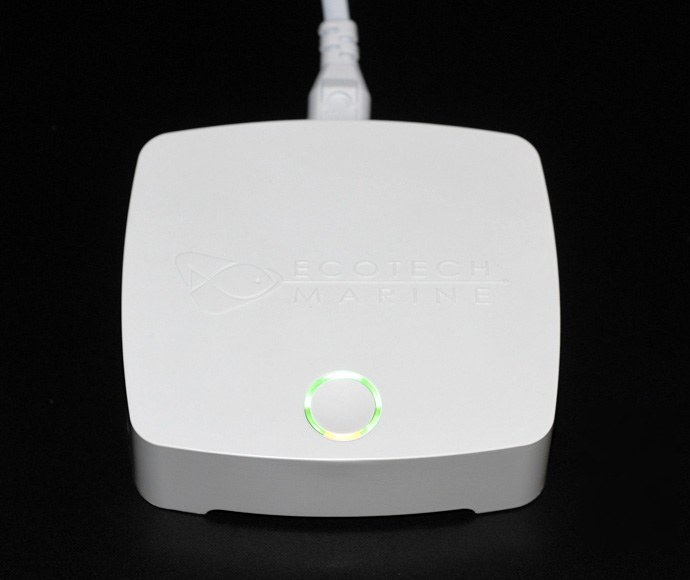 
Preface: The unit discussed in this article is a beta unit.  The final product may be different than our hands-on preview.

The Ecotech Marine ReefLink is a simple compact white box.  It’s only notable features are a multi-colored circular LED indicator light and three rear connections: a C7 power cable that plugs directly into the wall outlet (the power supply is located inside the housing so there are no external transformers), a standard Type-A USB port, and an ethernet RJ45 port.  No buttons.  No dials.  Nothing to manually interact with (unless you count the tiny pin reset button on the rear panel).  Its simplicity is a very good thing.

Ecotech traditionally uses multi-colored LED indicator lights to display the current operation of their devices, and the ReefLink is no different.  And sure enough, we saw the lights change color and patterns as we initiated the ReefLink.  Unfortunately the limited literature provided to us for this beta unit does not describe what the different lights mean, but I’m sure the retail version will provide users with full details.  I’m not the biggest fan of having to refer to a reference chart to understand what your product is doing, but if the product works as intended, there’s very little chance you’ll see much of the ReefLink after you set it up.

After you’ve connected the ReefLink with your internet network, you no longer need the USB cable.  In fact, it appears you no longer need to run the Ecosmart Live Connection Manager on any of your devices as the ReefLink itself seems to host the connection manager.   You simply log on to ecosmartlive.com from any web device (computer, laptop, tablet, or smart phone) and from anywhere you have web access, you can make changes to your Radions (and soon-to-be Vortechs).

As long as the ReefLink is powered on in range of your your Ecotech products and internet, you now have a true wireless, web-based experience … finally fulfilling the potential of Ecosmart Live, which is still in beta itself.

As expected with beta units, there are a few minor software issues that need to be hammered out before full retail production, but we have full faith Ecotech Marine will release a finished product that is extremely simple to set up and use.

Ecotech issued the following press release with information about the ReefLink’s pricing and schedule:

[ALLENTOWN, PA, August 30, 2013]—EcoTech Marine has announced plans to release ReefLink, the latest product in its line of cutting-edge, technologically advanced aquarium equipment. ReefLink is a wireless bridge that seamlessly integrates the web-based EcoSmart Live control platform with the radion line of lighting equipment to enable users to have complete custom control over their aquarium lighting from any location.

The launch will begin with a beta program in September, with full rollout scheduled for late fall 2013. radion owners who are interested in applying to be a ReefLink beta user are invited to visit http://ecotechmarine.com/products/reeflink to sign up. Beta program members will be slectected by EcoTech staff. Not every applicant will become a beta user, but several phases of beta testing are planned.

“ReefLink will change the game for aquarists worldwide,” said Tim Marks, president of EcoTech Marine. “This product will enable enthusiasts to control their radion lighting systems at any time during the day from any location around the globe. We’ll be beta testing our early prototype with a select group of power-users and are looking forward to receiving feedback and suggestions to make the public launch seamless. We expect to do a complete public rollout of ReefLink this fall, with full compatibility for vortech pumps planned soon. The ReefLink is one more exciting step into the future for EcoTech Marine customers.”

Priced at $99 for beta users, with a planned retail price of $199, ReefLink is expected to be available for purchase at leading retailers across the U.S. fall 2013. For a list of EcoTech Marine retailers, visit http://ecotechmarine.com/find-retailers.

About EcoTech Marine
Founded in 2003 and based in Pennsylvania, EcoTech Marine has revolutionized the way people think about aquarium technology and has raised the industry standard for aquarium equipment. Its technologically superior products, which include its VorTech pumps; radion lighting products; Elements coral glue; and accessories, offer unmatched performance, and its commitment to elegant design minimizes the equipment’s visual intrusion into customer’s aquarium.
The customer-centric company manufactures and assembles products – each of which has been tested and endorsed by marine biologists – that are easily programmable and customizable.